Walmart, Amazon and Huawei double-down on IoT and cloud 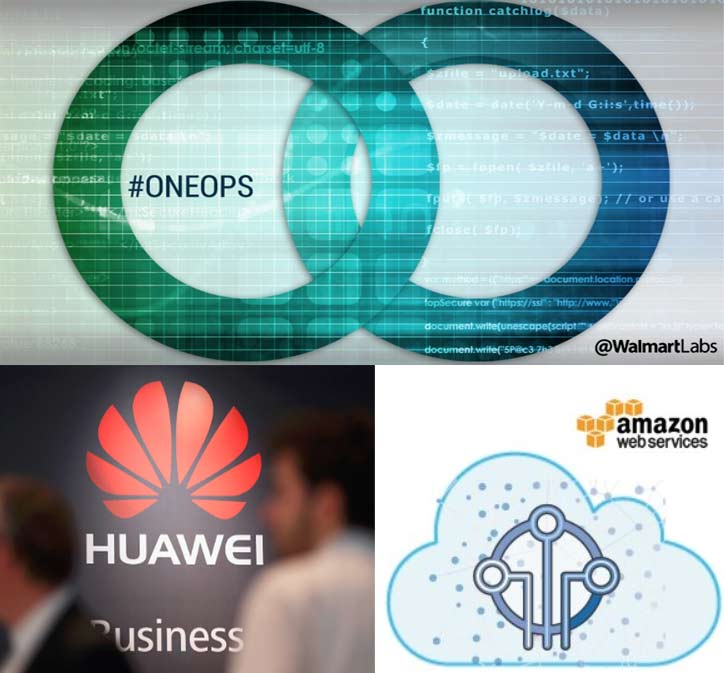 It was pretty obvious that the IoT market was going to grow in a very different way than my other other target market (digital signage) when super-heavyweights like Cisco and Google started making scores of acquisitions a few years ago, and teamed up with other tech-giants like Apple, IBM and many others to form industry organizations, standards bodies and technical expositions and conferences. However, even today there's plenty of room for even the biggest of big tech companies to get (more) involved with supporting connected devices.

As if to emphasize this idea, this week alone three of the biggest and most accomplished companies in the world made major announcements in the cloud computing and IoT spaces that ought to turn some heads. For starters, Walmart, the world's largest retailer, announced that they would be opening up their cloud management software stack to anyone interested in using it.

1) Cloud portability enables developers to seamlessly move applications, databases or entire cloud environments from one cloud provider to another. They’re able to “cloud shop” and take advantage of better technology or lower costs;

2) Continuous lifecycle management of the application means once a developer launches an application, OneOps continuously “auto-pilots” the app, scaling and repairing the app when unforeseen changes occur;

3) Faster innovation empowers engineers to spin up a new environment to host their app in a matter of minutes, without having to spend hours specifying the intricacies of a specific cloud environment. OneOps models all of that for them; and

4) Greater abstraction of cloud environments puts the control back into the hands of developers, instead of cloud providers, who often dictate the proprietary APIs, architecture, tools and technologies developers have to use.

Helping other firms interested in using cloud infrastructure to avoid vendor lock-in is a clear jab at Amazon (a major Walmart competitor, and the world's largest provider of cloud services, with many proprietary services on offer), but the point is valid: in our own recent attempts to move more WireSpring infrastructure into the cloud it has quickly become apparent that every vendor has their own lingo and processes for everything from storage allocation to billing, and simply trying to keep track of who is able to do what -- let alone give instructions to our engineers who will have to actually implement the plans -- is extremely challenging.

Of course, Amazon isn't resting on its laurels, and has announced a major new IoT initiative that utilizes AWS services (of course) that are custom-tailored to remote device authentication and communication. Given that IoT security is a major -- if not the major -- concern for many these days, being able to leverage Amazon for important but technically-challenging demands like key exchange and issuance could be a huge boon for smaller players and folks rolling their own IoT services.

A final piece of news takes us to the other side of the globe, where Chinese powerhouse Huawei also announced a double-down on cloud services, pledging to spend $1B over the next 5 years to make their in-house cloud services more accessible to external developers. I could certainly see them becoming a de-facto choice for Asian cloud and IoT projects much as Amazon has become in the US and Europe, though clearly Huawei has been making moves to expand their presence in the western market as well.

This all sounds like good news to me, as competition fosters innovation, and perhaps more importantly, drives down prices. I don't know if you've priced cloud services lately, but anything even remotely complicated quickly gets expensive. It seems like the pricing for these services scales even faster than the services themselves, and that's one trend I'd definitely like to see change soon.

Some industries aren't quite plugged into IoT... yet

eMarketer published a chart today from some research done by IDC group on their study of various vertical market leaders and their (current) take on the Internet of Things. In short:

The International Data Corporation (IDC) surveyed business and IT decision-makers worldwide about the IoT. In most industries, fewer than half of respondents said they were familiar with it. Only manufacturing and retail bucked this trend, with retail taking the lead by 3 percentage points.

I don't know whether it's a good thing or a bad thing that more heads of industry are familiar with the Internet of Things. On the one hand, virtually every industry stands to gain some efficiency by putting smart devices to use, and that usually translates into better prices, better products/services, or both. On the other hand, though, there's a lot of garbage in the IoT space right now, so it might actually be for the best that some people have yet to dial into the giant IoT hype machine. Wait another year or two, see which standards start to stick, which noise has quieted down and which solution providers have demonstrated to a commitment not just to the IoT space, but also to paticular vertical markets.

With the IoT in full swing, prepare for the Internet of Services

A few weeks ago, during Tesla's quarterly financials call, a financial analyst brought up Uber CEO Steve Jurveston's comment that if Tesla was able to magically produce 500,000 autonomous cars today, Uber would buy them all. He then asked if this was something Tesla would consider or if the company would simply "cut out the middle man and sell on-demand electric mobility services directly from the company on its own platform."

Obviously, Tesla revealed at least one possible option for their long, long game.

The Internet of Services is already a real thing. There are hundreds of places that will rent you 3d printing services -- email them a 3d model, and they will (snail) mail you back a finished object. We've been able to buy cloud computing on demand for years. And of course video on demand has been around since pay-per-view started broadcasting boxing matches in the 80's. But the fact is, as more and more things are connected, new services-on-demand will spring up, taking advantage of all of these new devices and the data that they create.

New needs will be created, catered to and serviced. And if one Accenture consultant's vision is to be believed, this might all happen without human interaction. While I think that last part has a ring of hyperbole to it, we're already seeing the rise of new 24/7 services -- personal digital assistants (think Siri and Cortana, not Palm Pilots) already answer our questions, take notes for us and handle our schedules. That would have been unthinkable a decade ago. And of course healthcare technology is quickly becoming ubquitous and always-on, so it won't be long before our fitness trackers schedule an appointment with the cardiologist and then cancel our recurring Amazon orders for deep-fried bacon.

The Internet of Services isn't coming. It's already here. But we haven't seen anything yet.