A Yahoo-backed startup called Zensors has been teasing a plan (and is now accepting beta testing applications) for a technology that foregoes the usual approach of making all kinds of things "smart" and instead using cheap cellphones and web cameras to identify, assess and track dumb objects in ordinary environments without the need for passive tags or active sensors.

Once identified by the system, the objects can then be tracked and analyzed, presumably across multiple phones or cameras. Even though the technoloy is pretty advanced (it was initially developed by a team at Carnegie Mellon and was then funded by Yahoo as part of their InMind Project). However, the AI is not quite smart enough to identify everything it sees... yet. That's where Amazon's Mechanical Turk platform comes in.

If you're not familiar with it, Mechanical Turk allows you to create a list of simple tasks and have them completed by an army of Internet workers, typically for a small fee per task. In the past we've used the system to quickly evaluate dozens of variables that affect the effectiveness of digital signage systems, and while our results weren't perfect, given the low cost of the program and the speed with which we could iterate over thousands of permutations, it functioned extremely well.

Apparently the researchers at Zensors think so too, because they're leveraging the Mechanical Turk platform to help teach their system about the things in your home and environment. As the human MT workers monitoring the Zensors sensors tag items and add descriptions, the Zensors system adds that information to a database, giving it a better chance of auto-identifying the object (and other similar objects) the next time it enconters them. Assuming the approach works, the massive database that they accumulate (combined with their proprietary  item-identification technology, of course) could give Zensors a leg up on competitors who seek to make things "smart" by enabling them with other technologies.

Of course, it might also (finally) be a legitimate reason to trust your smart-home data to the cloud.

In a deployment that straddles the line between (admittedly very simple) digital signage and a low-data M2M application, one Sainsbury store in the UK is attempting to replace the standard price channel markers that run along store shelves with small wireless tags featuring a remotely-updatable e-Ink display. 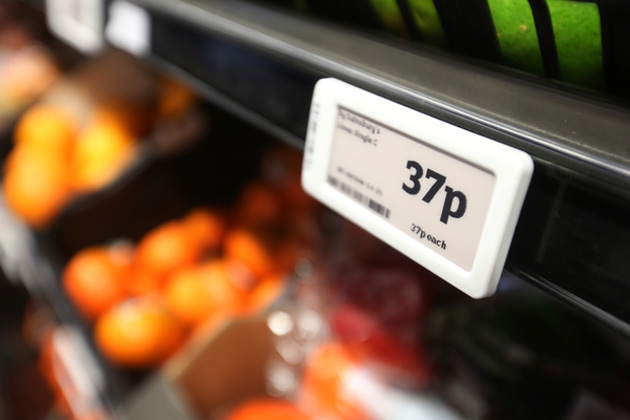 Over the past 10 or 15 years we've witnessed a number of different companies attempt to tackle the price channel problem. Current paper-label channels are prone to errors and take a lot of man-hours to update. In attempting to address these very real and expensive issues, we've seen supermarkets and big box retailers turn to LCD character displays, dot matrix screens and now e-Ink. And while the technology has certainly improved (for example, it's possible to power many of these tiny devices wirelessly by harnessing the extra radiation from the fluorescent lighting that most stores use), the tech is likely still far too expensive to see mass adoption. Case in point: a developer kit for a small e-Ink display still costs several hundred dollars, and that excludes fancy power and networking options that would allow each label to be completely wireless.

Of course, it's also possible that an upgrade to the price channel itself could feed network connectivity and low-voltage power directly down the aisle obviating the need for such tech, but that's another infrastructure cost that needs to be included when evaluating when and where the ROI is for this type of application.

There will definitely come a day when price labels, store signage and even product packaging will be electronic, animated and remotely controllable. But based on today's technical limitations and the cost of being an early adopter, I think it's still a few years away.

Have you been to iot-analytics.com yet? Unsurprisingly, it's a website dedicated to analyzing (and sometimes, analyzing 3rd party analyses) the IoT, M2M and related industries, and from what I've read so far, it's pretty good. I generally despise industry hype (and in fact I've written more than a few articles on our Digital Signage Insiders blog about the ridiculous hyperbole that permeates that industry), and it seems as if IoT Analytics will continue that trend, though with a bit less snark. It seems their MO is to sell research reports (or perhaps do bespoke research for your firm before it starts its next IoT project?), but they seem to publish a fair amount of data on the website for free, which gives the rest of us a window into some areas of the market that we might not otherwise know much about.