A few weeks ago, I received a phone call that surprised and delighted me. Dick Blatt, the President of POPAI, called to ask that I join the organization's board of directors. Eager to agree, I first checked around with my partners to ensure the additional load wouldn't saddle them with even more insane amounts of work than they currently manage. Once that was settled, the choice to participate was pretty easy. Why? Well, it's not every day that you get to rub shoulders with top marketing brass from brands like Disney and Johnson & Johnson, or retailers like Walmart. But those are precisely the kinds of people who will be attending the thrice-yearly board meetings held around the country. While I have some idea of the kinds of issues I'd like to raise and questions I hope to get answered, I know this blog has a large, lively and often opinionated audience. So, I thought I'd check with you folks to see if there are any burning questions or concerns that you'd like me to bring up in casual conversation.

What does the board do?

Beats me. No, seriously, I haven't gotten the agenda for next week's meeting yet (it usually goes out a few days before). Most likely, the issues will focus on the policy and direction that POPAI and its chapters will take on all sorts of subjects relevant to the retail, merchandising and point-of-purchase advertising industries. Since POPAI has shown its intent to expand its role in the digital signage industry via its support of our digital signage standards effort and other issues like advocacy and even in-store privacy, I expect to be representing the needs and concerns of our industry in front of the other (far more savvy) members of the panel. Thankfully, I won't be our lone representative. Scala's Jeff Porter has been on the board for several years now, and hopefully the presence of two of us will prove so formidable and overwhelming that the rest of the group will immediately agree with our every initiative. 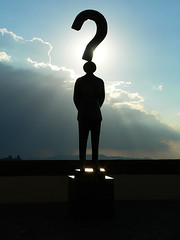 Image credit: Marco Bellucci
Ok, that's not too likely. And like I said, there's already an agenda. But there will be opportunities to raise new, relevant points, promote our industry's perspective, and otherwise schmooze with some of the people that a lot of us would love to work with, or at least cite to the awe and amazement of colleagues.

What kind of things should we talk about?

I'm still collecting and reading through the results of our latest reader poll, which ends on May 31. If you or someone you know hasn't taken the survey yet, please fill out the survey now -- it should take you less than three minutes. While I'll do a full analysis of the results in another few weeks, one thing I can tell you is that cost no longer appears to be the major sticking point for a lot of projects. No, the number one concern of respondents was that digital signage projects require too much interdepartmental communication and sign-off. Still lacking a place in most companies' formal advertising, merchandising, sales and even IT agendas, a lot of us find ourselves having to orchestrate major multidisciplinary efforts to get a project planned, let alone deployed. Whether this means everyone wants to take ownership or (just as frequently) no one does, it's a major problem for a lot of larger deployments. Hopefully this is something that my fellow board members will have some insights on.

But that's just one item I want to bring up, and certainly there are many others. As I mentioned at the start of this post, I know a lot of folks out there can suggest more important (or more pressing) things to call attention to. So, where should I start?

If you could have the marketing execs at companies like Disney, J&J and Walmart answer any question you like, what would your question be?

I'll select the best questions from the list and try to get them answered next week.

PS: As of this writing, POPAI's board of directors page had me listed as being the EVP/Creative Director at Leo Burnett. While that certainly would be a fun change of pace, it's definitely a typo. They should be correcting that shortly.

+1 # Stephanie Krieger 2009-05-29 20:14
Bill, This is great news! Obviously they are asking you to be on the board for a good reason. I am assuming they are going to ask you where in the DOOH arena will their dollars be best invested. Traditionally they are looking for a large reach and an audience that is most captive. I am curious as to what you would tell them?
0 # Bill Gerba 2009-05-31 16:33
Hi Stephanie, Thanks, I'm pretty excited (though I will of course need to be careful to separate my blogger persona from those elements of the meeting that require confidentiality). Most of the people on the board are brands and suppliers of retail merchandising equipment and POP displays, with a few retailers. So the whole group already understands how important in-store marketing is. If anything, they might ask about the perceived benefits of digital POP over static POP, which is unfortunately something that will require a LOT more research before I can make a cogent answer. To your question, though, it's hard to say that one area of DOOH spending is "better" than another, because the goals of the program and the audience reached varies so much from a grocery store, for example, to Times Square. Both are valid examples of DOOH advertising space, but clearly somebody advertising in Times Square has very different goals and expectations than somebody advertising on your grocery store's digital signage network, right?
-1 # SM 2009-06-03 15:54
Just in from POPAI - something to comment about: Memorandum To: All POPAI Members From: John Anderson, POPAI Chairman of the Board, BPOil/Bovis Lend Lease Re: POPAI President and CEO Dick Blatt resignation June 3, 2009 Please be advised that POPAI President and CEO Dick Blatt has announced that he will resign those posts at Point of Purchase Advertising International (POPAI) effective immediately. The announcement was made yesterday during POPAI's Board of Directors meeting. Since Dick joined POPAI nearly two decades ago, we've seen Marketing at Retail grow from below the line media to an important strategic campaign element. Today, POPAI's board and membership is comprised of the world's most powerful retailers, agencies, brands and producers. POPAI currently has more than 20 chapters globally with 17,000 individual member contacts. The entire industry and organization recognizes his dedication over the past 17 years. We wish him much success in his future endeavors. POPAI continues to grow with strong leadership in North America and globally, as we progress forward studying shopper engagement, shopper insights, protecting our member's interests on the legislative front and fortifying the business of Marketing at Retail for all of our membership segments. POPAI's global reach and resources will continue to help drive a new level of success within the Marketing at Retail environment. Among our many initiatives, this summer, POPAI is launching retail level research across multiple trade channels- including supermarkets, drug stores, mass merchandisers and convenience stores- to determine what in-store solutions, Marketing at Retail materials and shelf layouts work best and, most importantly, why and how they turn shoppers into buyers. Study participants include 7-Eleven, Inc., Ahold, Frito-Lay North America, Pepsi-Cola North America Beverages, Walgreens and a Major Mass Retailer. POPAI will continue to provide the services and programming that you have come to expect. If you have any questions, please do not hesitate to contact Kevin Murphy, Vice President of Member Services at 703.373.8804
+1 # Bill Gerba 2009-06-05 15:11
Thanks for posting that info, SM. As you might imagine the Board is aggressively working to ensure POPAI's position as the premier global organization for marketing at-retail, and is very excited about POPAI's ability to lead future generations of in-store marketers. I'm sure we'll have more coverage as the new CEO saga unfolds.
Refresh comments list
RSS feed for comments to this post
JComments