Tweet
With dozens of technologies proffered by hundreds of companies to thousands of network owners and operators around the globe, it's no wonder that many people are still having trouble making content A play on screen B, or sending play list C to network D. In fact, I'd have to say that for any given RFI or RFP that I come across, a good 25% is devoted to simply getting the vendor to admit what his product is or isn't capable of doing. Sales calls aren't much different. Compounding the trouble is the jargon issue: when I say "playlist" and you say "campaign," are we talking about the same thing? Maybe, maybe not. Fortunately, a few years ago a group of companies came together to see if we could start sorting out the mess by developing technical standards to promote interoperability between the different products and services out there. While we still haven't solved every last problem in the digital signage world, I think the time is right to start talking about the great efforts of our team, and give you a preview of some of the standards that are currently being implemented.

Who makes the standards?

One of the biggest challenges associated with forming a new standard is getting it adopted. So from the start, a big goal of our group was to get as many different companies involved as possible (the idea being that anybody with an "ownership" stake in the standard would be more likely to actually use it). So a bunch of technology vendors, advertising networks, ad aggregators, and a whole host of others -- over 50 in all -- sat down at the 2008 Digital Signage Expo to detail some of the things that we thought could really advance the industry, if properly standardized and agreed upon.

POPAI, a group better known for its work in retail marketing than technical standards development, agreed to host our digital standards effort and provide support in the form of teleconference lines, meeting rooms and (most importantly) legal review. As a non-profit organization with a global presence and very long operating history, our group felt they provided the reach and stability we'd need to get the standards adopted widely.

With the basic foundation in place, we started holding weekly conference calls to discuss business issues, implementation challenges, and, of course, the development of the standards themselves. For the most part, we've been pretty quiet about what's going on, since the general agreement among our members was that there's enough hype in the industry without us touting some almost-ready standards that might still be six months away. 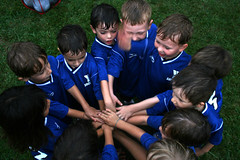 Image credit: Woodley Wonderworks
Previous groups at POPAI have published standards on terminology and RS-232 communications for screens and other peripherals. But for one reason or another, they've unfortunately had limited adoption, even inside the industry.  The group formed in 2008 hopes to change that, and as of today has ratified one standard (which has been blessed by POPAI legal). The goal of the first standard, which focuses on media formats, is to make it easy for content developers to create assets that are likely to play correctly across a large number of digital signage systems. Likewise, vendors of digital signage hardware and software can test against known file types to ensure that their systems do the right thing. And of course, it's a test of our group's ability to actually see the process through to its fruition (hopefully I haven't jinxed us by saying that, since there's still a bit of work to be done). As I wrote over on Digital Signage News, there are 31 sample content files that need to be developed so that companies will have something to test against. (About half of these files have been created so far.) We also need to get a new section of the POPAI website up and running so we can list those companies found to be "standards compliant," and provide a place to download the standard itself, the test scripts, and the sample content files.

The group is also working on a standard for play list interoperability, which I'm pleased to say is really coming together. This first version is going to be fairly straightforward, supporting only basic functionality, but it's meant to be useful for passing playlist information between two servers (for example, a CMS and a digital signage management server), or between a server and simple player. Our current schedule has the functionality being finalized by early June, with a vote shortly thereafter. Beyond that, we have schedule interoperability and data transport interoperability on the agenda. While the extent to which these standards get adopted remains to be seen, we've gotten confirmation from several of the more credible players out there that interoperability and standards compliance is a key priority.

Is this the only standards game in town?

When it comes to technology standards specifically targeting the digital signage industry, I believe it is. (Please leave a comment below if you know otherwise.) However, there are plenty of other groups covering other aspects of the business. For example, OVAB has been working on guidelines for audience metrics and measurement that are already proving important to many network owners and advertisers. Likewise, the W3C provides standards for things like SMIL, XML and HTML that many of our underlying technologies use.

What does the future hold?

Aside from continuing down the technology path and building standards that will allow more products to work together, a secondary goal of our group is to actually expand the ecosystem of companies connected to digital signage. Our hope is that by making our interfaces open and standard, we'll start seeing more activity from service providers that might not have had the time or inclination to tackle our market one vendor at a time. For example, think of the news provider who could suddenly provide his news feeds in a way that could be easily injected into a standard play list. Or the embedded media player manufacturer whose products will suddenly work with a content management server from any standards-compliant vendor. Or the social media company who could provide ready-to-use widgets that work on dozens of digital signage platforms.

Of course, the direction that we take will continue to be shaped by the industry at large. If a new gizmo or doodad becomes the next must-have feature, you can be sure it's something that will be discussed in detail during our weekly calls. While I couldn't possibly guess what we'll be working on a few years from now, I'm sure that it will continue in the vein of finding ways to reduce inefficiency and hyperbole in a way that's conducive to fostering industry growth and acceptance.

Are you interested in getting involved with the standards effort? Is there some area that you think would benefit from our attention? If so, leave a comment below.

Or, if you're one of those die-hard naysayers who thinks we'll never accomplish anything (I know who you are), I'd like to hear about that too :)

+1 # Jeremy Gavin 2009-05-21 20:05
Screenfeed would love to see standards regarding content and playlists. I would love to be involved with the standards effort. Please let me know how we can get involved.
+1 # Emerald Marino 2009-05-21 22:13
Bill, great post again, as I am getting more and more involved with this specific issue. The key here is content harmonization, transformation, and distributon across multiple platforms, and having the capability to unify the fragmented landscape of digital destinations so that advertisers can maximize their efficiency when planning a campaign. I actally know of a company that is developing this solution today, but they haven't launched yet and I have signed an NDA agreement with them. I'll tell you right now, this company has a significant piece to this whole puzzle, and they are poised to facilitate opportunity and growth in this industry in a big way. Their technology is absolutely mindblowing and I'm sure you will hear about them soon. I think they will be soft launching their network and advertising portal sometime this summer. I'll keep you posted if I hear anything else. Should be interesting. Thanks for continuing to explore what is arguably the most important discusson regardng digital destination distribution.
0 # Franois Reeves 2009-05-22 08:06
Bill, You are taking on a big task that if successful will greatly benefit the whole industry. We have talked about the need for interoperability and campaign management before. There seems to be a consensus among players for its necessity. So that's a key starting factor for success. RS-232 has been abandoned by a lot of screen manufacturers so I wouldn't put too much efforts on that one. I have looked at a lot of digital signage CMS and schedulers and was amazed by the one file at a time mentality that prevailed in their design. Sure there were batch capacities but programming, scheduling and remote updating involved a lot of manual operations based on single user administration. I think standards are necessary but efforts also have to be deployed in making narrowcasting software more "progammable". My 2 cents. It would be great to include someone from SeeSaw networks or the equivalent--- their input would be helpful in determining the advertising needs and specifications. If I can help with the documentation and presentation, feel free to contact me.
0 # Fabio Vignoli 2009-05-26 20:09
I am the responsible for technology and IP for the 'Retail Solutions Venture' (a corporate Venture Of Philips Lighting). We would like to be involved in the creation/review of the POPAI standards specs for digital signage. As Philips is a big company, there might be other people already involved. If you know anybody we will align internally.
0 # Bill Gerba 2009-05-31 16:45
Jeremy: I appreciate your enthusiasm. You can contact Bill Zurynetz (bill

lostboysconsortium.com) for information about how to become involved in the digital signage standards group at POPAI. Emerald: I've heard more than a few pitches from companies who claim to have solved this very problem, and so far most of them have disappeared quietly without ever gaining much traction. By far the most progress is being made by SeeSaw and Adcentricity here in North America, and BookingDOOH (via Neo Advertising) across Europe. I don't think the glue that connects these and other companies will be something that can be owned by a single corporation, since there's a lot of potential for misuse in that situation. Hence POPAI's role as a (hopefully) fair and impartial standard-backer. Francois: I agree with your take. One of the really interesting things about working with a bunch of my competitors on this task is the amazingly different ways that we have all taken to get essentially the same job done. Scala, Coolsign and WireSpring, for example, have three completely different ways for attaching metadata to content files. Developing a system that meets all of our technical requirements without removing a ton of the flexibility that we've all worked to develop has been a challenge, as you might imagine. Fabio: I believe you've already spoken with Bill Z and Jeff Porter offline. If you're still having trouble getting in touch with the right people, please send me an email.
+1 # Lean Education 2011-01-17 09:27
Digital signage is a form of electronic display that shows information, advertising and other messages. Digital signs such as LCD, LED, plasma displays, or projected images can be found in public and private environments, such as retail stores and corporate buildings.
Refresh comments list
RSS feed for comments to this post
JComments