An Updated Budget for Digital Signage Hardware and Software

Tweet
It's become a tradition here at WireSpring to put together a budget for a "typical" 100-venue digital signage network each year. Our goal is to capture both the upfront capital expenditures as well as the ongoing operating expenses that a network owner would face over a three-year period. With a slowing global economy and tighter access to capital than ever, we felt that this year's update should also include a bit more background on the payroll and other costs that networks of this size typically face, in the hopes that companies thinking about shrinking, expanding, or starting out from scratch will have a better idea of what the "typical" competitor might look like.

Update: Since we write a new pricing article every year, we've created a page that lists all our articles about digital signage budgeting, cost estimates and price guidelines. This is also a handy page to link to if you want to point your friends or clients to our latest pricing data, since we'll be updating the page whenever we add another article in the series.

Where do we get our numbers?

While our previous cost estimates and ecosystem components have closely matched those from other industry analysts (so we don't think we're too far off the mark), the myth of a "typical" network is more strained this year than ever before. More vendors and network owners are choosing to implement screens with new formats and more varied locations, injecting more diversity into the projects. Plus, the idea that there's a standard staffing requirement for any digital signage network is pretty ridiculous. While we and others have proposed a list of key positions that need to be filled when creating a digital signage team, some networks are still very heavy on content production, while others might be composed almost entirely of sales folks. Still, as we looked across a wide array of networks -- representing not just our products but also our competitors' solutions -- we were able to get a reasonable feel for what most companies needed as far as the human resources side of things.

What's the cost of a typical 100-screen digital signage installation?

Enough with the introduction and disclaimers. You want to see the numbers, right? (If you're reading this in an email you'll either need to turn on images or visit /weblog to view the tables on the web.) Well, here they are:


How have things changed since our last pricing study?

Before we get started with the analysis, all of the usual caveats from past years apply. Namely, this is an aggregate budget, so it's not meant to reflect any one company's products. It also doesn't distinguish between traditional software licensing versus software-as-a-service (SaaS) products. Installation assumes a two-man team arriving at a venue that has existing power lines (so no high-voltage work required). That said, the cost of installing a 100-screen network has dropped about 16% in the past year. The biggest savings came from dramatic price reductions on large LCD screens, which now run about $1,000 for a 40" screen with a three-year warranty (which is a good idea in general, and may be a requirement if you're leasing your equipment). Digital signage-specific products like software and player hardware also saw a significant percentage reduction, reflecting increased competition in the market and cost efficiencies in the underlying technology. Installation and management services had much more modest (or nonexistent) reductions, indicating that perhaps these areas are leveling out. Here's how the money is spent on a percentage basis:

To cover these expenses, you would have to allocate about $157 per screen per month, not including content and additional personnel costs. If that sounds like a lot, consider that it's down more than 33% from 2004 (the first year that we started tracking costs) -- even after upgrading to LCD screens from older plasma technology and adding in additional funds for warranties. (Note: to ensure an accurate comparison, we removed the 24/7 tech support line from the 2004 numbers, since this was not included in subsequent years.) As one might expect from a relatively new high-tech industry, the capital costs have been falling for a while: 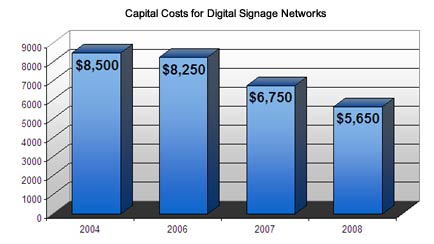 What about personnel costs?

Once you get into content and staffing, things become a little more fuzzy. We took a look at budgeting for digital signage including content production costs last year, and those numbers are still pretty fair. If anything, they may have dropped a bit since the economy is so bad and many production companies are feeling the pinch. This being the first time we've looked at staffing numbers, I can't offer a comparison. As the "average" 100-screen network takes somewhere between 7 and 15 people to run, it's also hard to come up with a baseline for staffing costs. But if we assume that the average salary is $50K, and the average staff size is 10 people, that's another $500,000 in salaries and associated costs every year, for a total of $1.5M for our three-year budget. Doing the math, that adds another $41,666/month in expenses, or $417/screen/month. Added to the $157/month in capital expenses, the "average" screen in a "typical" 100-screen network costs about $574/month. Notice that I'm qualifying all of these numbers, since there's no such thing as typical or average in this wacky industry.

Since most people out there are focused on ad-supported digital signage networks, I'll put all this into perspective. In past articles, we've learned that advertisers in the right markets may be willing to pay the rate of $130-$150 per screen (or venue) per month. That would mean that your network has to place about 4 paid ads on each screen every month to meet the expenses outlined above. Anything on top of that is gravy. I'm not an ad sales guy, so I have no idea how feasible such an expectation is, but I hope this will provide some food for thought (and discussion) for those of you who are.

So, what do you think? Are these estimates in line with your expectations and experiences, or are they totally off? What else needs to be included?

P.S. If you want to see how our estimates have changed over the years, we've created a page that lists all our articles about digital signage budgeting, cost estimates and price guidelines. This is also a handy page to link to if you want to point your friends or clients to our latest pricing data, since we'll be updating the page whenever we add another article in the series.