Tweet
I came across an article about the "digital signage ecosystem" in the June issue of Digital Signage Magazine. Written by iSuppli's Sanju Khatri, it's largely a re-hash of the industry research they've been conducting and presenting in various forms over the past few years. Two things did catch my eye, though, thanks to the nifty graphics used in the article. The first has to do with the "ecosystem" itself -- the collection of parts and pieces, vendors and contractors, and customers and suppliers that must come together for a digital signage project to get deployed. The second is iSuppli's analysis of the cost of deploying and managing a digital signage network. Since these are topics near and dear to my heart, I thought I'd point them out to folks who don't normally read Digital Signage Magazine, and offer up a few new thoughts on each.

What the heck is a "digital signage ecosystem"?

We've written a number of articles about the essential role a project manager or integrator plays in any digital signage installation. Whether it's an internal person or team responsible for overseeing the implementation of the project, or an outside firm hired explicitly for the cause, the project manager may have to communicate with (and foster communications between) any number of vendors, partners and customer endpoints. In iSuppli's mind, such a scenario looks like this:

As it just so happens, I recently wrote an article about project management for Sign Business Magazine, and did up my own chart for the occasion. Here's how mine looks: 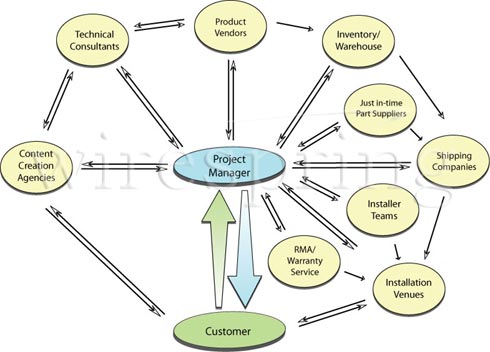 Of course, the two images are capturing different things -- iSuppli's focuses on the parts that go into a digital signage solution, whereas ours focuses on the people that make it work. Where they list a separate bubble for suppliers of different software and hardware components, we just list "product vendors," and then show the relationships that take those products off the shelves and put them to use. I think this is particularly useful when trying to illustrate how complicated a project can get, even in the early stages. My point with all this? Too many companies still think "parts" rather than "people" when approaching digital signage. This can lead them down an expensive and time-consuming path that ends with a marginally successful installation (if the network gets installed at all). The parts are certainly important -- after all, I'm a parts guy myself -- but it takes substantial know-how to put them together and keep them not just working, but working to their fullest potential.

The other part of the article that grabbed my attention is where they talk about the cost of deploying a digital signage network. Since we do a similar article in this blog about once a year, I was eager to see how our latest cost estimate based on actual digital signage projects stacks up against iSuppli's mountain of research. Here are the two charts side-by-side:

Wow, it's a good thing that the number of categories and the names for each one (which we've been using for about four years now, mind you) are exactly the same. Otherwise, a comparison might have been a bit more difficult. The first thing you may notice is that iSuppli's chart is for initial costs only, so the pricing for "content management software" must assume a one-time license fee, and not a pay-as-you-go model like we use. That's fine, because our costs (which are based on Software-as-a-Service, but not necessarily our exact pricing for FireCast) assume three years of service and technical support, so that may be a wash. Also notice that iSuppli omits technical support from their pricing scheme, despite the fact that they list it in their ecosystem diagram. This suggests that they're either bundling some portion of it into the costs for the various software components, or they've left it out because it's not part of the initial project cost. To wit, Khatri notes that:

There are two main components for the ongoing cost -- content creation and technical support. The content cost is the big unknown and probably the biggest factor in (sic) the digital signage network does not work.... Depending on the scale of deployment, around 80 percent of the ongoing cost could be attributed to content creation and the rest (or 20 percent) to ongoing technical support for content and network management.

Without any ongoing cost estimates to start from, I can't speculate what iSuppli thinks it might cost to maintain a network over time. But I can tell you that based on our estimates, perhaps as much as 60% of the content management software fee goes towards technical support or upgrades in some form or fashion.

In any event, our numbers seem close enough to iSuppli's (in percentage terms, at least) to suggest that they're still a good ballpark estimate for those planning to deploy a digital signage network. However, if you're just getting started, I definitely recommend you take a long, hard look at the organizational chart above and try to budget your time and money accordingly. It may seem easy to figure out how much the different parts of your project will cost. But when it comes time to finally turn on your network, you'll find that it's just as important to have the right people on your team.

Have you deployed a digital signage network, or do you have one in the works? What changes would you make to the charts above? Leave a comment and let me know.

+1 # EAF 2008-06-27 08:42
Dear Bill, There's something I miss in the main part of such analisys which is the connection cost. According my own calculations, the cost of deploying and running an ADSL-based network is often the main cost chapter in this kind of projects, even higher than displays or PC's in a two-years-long scenario. What's your feeling about that? Thanks a mill, EAF
+1 # Steven Tung 2008-06-28 04:12
Dear Bill, a very informative article. In todays digital signage system there are two type one is PC based and other is embed card system. The cost of the PC based system software and hardware maybe the same as your figure total of 25%, but with embed one the cost could be lower. Cybersys is using the embed one, do you have some information in regarding embed VS PC based ? thanks
0 # Dave Haar 2008-06-30 15:04
Dear Bill, What a terrific article. It is exactly in line with the education we have been doing for the past 4 or 5 years as well. I want to commend both you and iSupply for pointing out the infrastructure of a digital signage project in terms of both elements and people. As I mentioned - we present the chart slightly differently - but it contains all of the same elements and people. Its is amazing how similar our messages are. We also took a look at cost of ownership over time as it relates to player placement and recently published a white paper on the subject- "Cost Ramifications of Player Placement in Digital Signage Networks". Folks considering deployment of digital signage networks should take a hard look at maintenance and service costs when players are placed 10 feet off the ground at the screen. We obviously promote our CAT5 cable distribution and extension systems and find that they are significantly less expensive to install than other cabling or non-cabling solutions. Keep up the good work. For information on our blog - please visit http://minicom.blogspot.com Thanks. Dave H. - Minicom
0 # Bill Gerba 2008-06-30 15:16
EAF: That's certainly a good point, though I've noticed over the last 2-3 years at least that there has been an increasing trend toward using existing lines whenever possible. Obviously this wouldn't work in an outdoor environment or probably even in shared spaces like mall concourses, but many of the retail, government, education and even health care projects that we've worked on recently have been driven internally (e.g. by the venues), who either have sufficient excess capacity to handle the bandwidth load, or else haven't bothered to tell us that they had to run new lines to support the signs. Steven: I have noticed an increase in the number/types of appliances on the market, but have not heard of many notable projects that actually use them. Consequently, they didn't figure into my estimates, which are largely based on our competitive survey of the market and inputs from people actively working on and/or running existing networks. I'm sure that there would be a way to lower costs using an embedded platform, though it might come at the hidden cost of losing some flexibility or feature that might otherwise have improved the network. Dave: Thanks for the positive feedback. I noted the whitepaper (which was admittedly pretty good) back in April [[http://digitalsignagenews.blogspot.com/2008/04/m orning-press-digital-signage-news-for_23.html|over at Digital Signage News]], and I agree that it often does make a lot of sense to use video over CAT5 to keep the players in a back room. I think our mutual customer, Wal-Mart Mexico, agrees as well :)
0 # Lynn Marentette 2008-07-13 02:16
You make a good point, Bil, that too many companies think "parts" rather than people. I'm still looking for examples of good digital signage systmes for my "usability hall of fame"...
0 # Ray 2008-09-09 16:38
Fascinating reading! I've been developing a digital signage business model during the past few months and am currently at the point of analyzing costs, projecting revenues, raising money etc. Anybody out there with advice?
+1 # Bill Gerba 2008-09-12 17:21
Hi Ray, We've been doing a cost estimate article on this blog every year since 2004. The most recent is our 2007 article (we usually update them around November), which is called: [[http://www.wirespring.com/dynamic_digit al_signage_and_interactive_kiosks_journal/articles /A_new_look_at_the_costs_of_digital_signage_networ ks_and_content-338.html|A new look at the costs of digital signage networks and content]]. Hope that helps, Bill
0 # Ediz Burla 2008-12-01 21:34
Dear Bill, What an impressive article. I like the way you demonstrate the digital signage eco-system. Besides the content creation and the technical support costs, content management services plays an important role on ongoing costs. According to surveys it's stated that around 75% of retailers ask for one single channel operation in stores. But what if you're managing several channels according to the store demographics, targets, stocks, waiting time...etc. We've experienced a dramatic additional work in order to be able to control and manage several channels of a single client. No doubt, this additional work will result an increse on monthly management fees. This may result a big change on your charts. Have you anticipated and calculated such additional mgmt. works on your charts. Rgs. Ediz Burla VP Marketing, TVeez Turkey
0 # Bill Gerba 2008-12-02 15:11
'Hi Ediz, That's a very good point, further complicated by the fact that your competition might be global. Here in the US, an 8-sec animation might cost $5,000 (or much more or much less, depending on what you want). But going through an intermediary and having the work outsourced to a low-wage country like India could potentially reduce the cost quite a bit. My estimates above are generally based on what I've heard from content designers and the firms that have made content for my company's own customers. Obviously your mileage will vary :)
Refresh comments list
RSS feed for comments to this post
JComments