Tweet
Like a lot of people, I tend to look at January 1st not as an arbitrary date, but as the official starting point for doing things I really ought to have done during the past year. One easy place to see this in action is in my use of Twitter. I generally don't ever tweet personal stuff, so virtually everything in my Twitter stream is business related. And since I started using the service in late 2008, my usage patterns have looked something like this: January - lots of tweets every day, multiple conversations; February/March - at least one tweet/day, and perhaps a retweet or reply as well; April - November, steady decline in the frequency of tweets; December: meta-tweets about lack of recent tweets, prognostication about next year. This year, though, I got the feeling that the overall volume of digital signage-related tweets was decreasing, so I turned to my friends at the DailyDOOH for guidance, knowing that they are pretty neurotic about tracking metrics like that. True to form, DailyDOOH's Andrew Neale quickly turned around a spreadsheet full of data to pick apart.

What can the hashtags tell us?

If you're talking exclusively about digital signage-related tweets, then at the very least we've been roughly stagnant for the past half year: 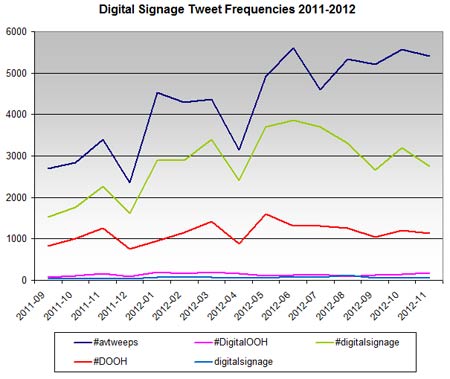 The most important tag to look at is #digitalsignage, which is clearly industry-centric and unlikely to be confused with other terms (unlike, for example, #DOOH, which people sometimes use to evoke a Homer Simpson-esque response to something). After considerable growth between September 2011 and July 2012, we've seen a decline in the latter half of this year. #DigitalOOH (again, likely to be very industry-centric) as well as digitalsignage (without the # sign) and #DOOH have all been flat as well. The one exception to this trend is the AV industry-oriented tag #avtweeps, which has seen nearly 100% growth over the past year, I think largely due to that industry getting organized and more involved with Twitter in 2012.

Are tweets a reasonable proxy for industry activity?

Probably not, but there might be an inverse correlation between the two. According to our Digital Signage Sentiment Index for Q4, the industry has seen modest but steady growth throughout this year. Other proxies, like commercial LCD shipments and AV equipment sales, have similarly crept up over the past 12 months. So if anything, the decrease in industry-related tweets might be correlated with people spending more time doing actual work and less time talking about it on social networks. I know that's certainly what happens in my case: come January 1, I return from an end-of-year break and have plenty of time to chat online while business spins back up. By mid-quarter, things are already busy enough that I have to start dropping nonessential activities, and microblogging can take up more time than you might think.

I don't have any practical advice or actionable insights to offer with this little analysis. It was merely something that piqued my curiosity, and I thought might be interesting to other industry observers. At this point, I'd normally say something like "leave a comment with your own thoughts," but as the graph suggests, you're much too busy for that :)

0 # Marvin Goins 2012-12-12 08:51
I'm never too busy to share an opinion which can perhaps help the industry of digital signage. Tweeter is really getting more popular these days as it is a common place for gossip and opinions, where even celebrities become normal people and level with the average person in society. It has a big influence on just about anything that the world has to offer.
0 # Leland 2012-12-13 22:02
Interesting article .. and @Marvin very true! using [[http://www.acesignsonline.com|custom signs]] can really help personalize your message to adapt to a certain market.. helps ALOT! :)
0 # Allen 2012-12-20 19:26
interesting post!!! as i am looking for the widespread application of led in different-2 industry like having in marketing with [[http://www.ledsignsupply.com/|electronic led signs]]
0 # Mabel Bigham 2012-12-27 12:08
I don't see how tweets can affect the success of digital signages. Maybe I really didn't understand all too well. Hope there is a simple blog which explains all of this.
0 # Cable Phillips 2013-04-22 05:08
It's not a perfect analog to measure popularity, but it's certainly an interesting and convenient one. Somewhat similar to the TIOBE research on the popularity of programming languages. == Cable [[http://www.brightledsigns.co m/|Bright LED Signs]]
Refresh comments list
RSS feed for comments to this post
JComments