It's been several weeks since we posted our latest digital signage sentiment survey, so I suppose it's about time we discuss the results -- and the future of the poll. As a quick refresher, when we looked at last quarter's survey, we were finally able to suss out trends for both the growth of the industry and the overall sentiment of the survey takers. The short version: industry growth is in the high single-digits, though respondents are generally and consistently more optimistic than that. With this quarter's data, we can do more of the same. But is the DS Sentiment Index telling us anything useful? Things that we couldn't already guess? And is there any point in WireSpring trying to keep tabs on it all?

As always, we start with a review of the data. Unfortunately, we had many fewer respondents than normal this quarter -- only 55, as opposed to the 80-100 that we have gotten in the past. While this number is still large enough to produce a statistically significant result, it's just not as satisfying as a bigger number would be. In any event, here are the charts: 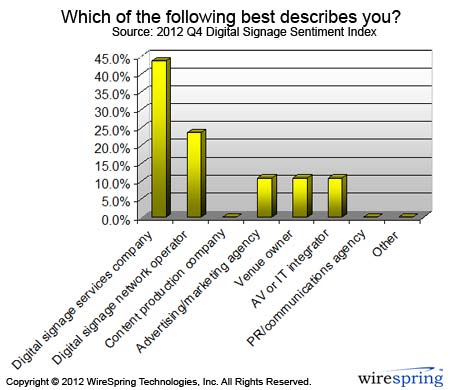 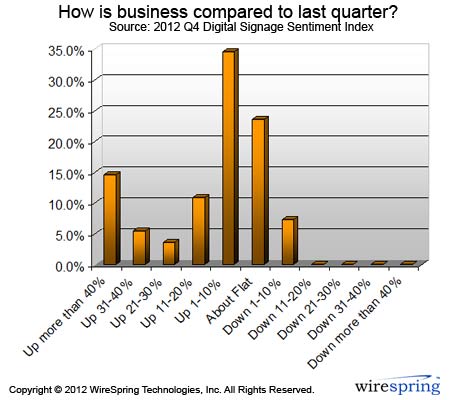 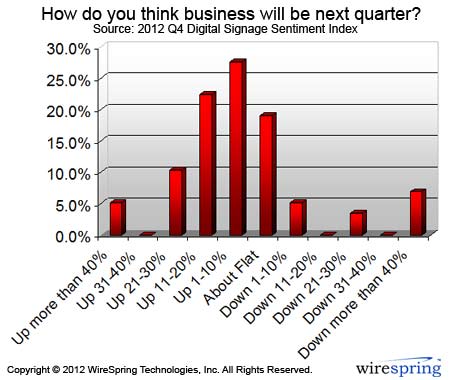 Despite a smaller sample size, the general composition of the respondents was the same: vendor-heavy. Consequently, the results probably represent many of the same people as in times past, despite fewer survey-takers. The trend graph, however, tells a different story:

While respondents felt that business has improved since last quarter, they are a bit less optimistic going into 2013. I'm surprised about this for two reasons: first, people generally get all gung-ho about kicking off a new year, which I would expect to produce more optimistic results than normal. Second, as we mentioned last time around, our survey takers tend to be a pretty optimistic group to begin with, so if they're largely predicting a slowdown, that illustrates an uncommon hint of pessimism.

Let's ignore the future for the time being and focus on the present. Respondents expected modest growth this quarter, and were treated to a nearly 6% increase. While that might not sound like a lot, it represents almost half of the growth for all of 2012. Unfortunately, that does mean that our "actual" growth for the year is in the 12% neighborhood. That's pretty respectable, but it's nowhere near the 24% growth that respondents should have experienced based on their optimistic quarterly survey submissions.

Going into 2013, it does look like the current crop of survey takers are expecting some slowdown in growth (if not a possible contraction). We still don't really have enough data points to gauge the accuracy of such a prediction, but as noted before, past results have generally been optimistic, which may give some cause for concern. For those who read into these kinds of things. From a blog survey. From an industry vendor. Of course, this pessimism may be attributable to respondents' concerns about the fiscal cliff or other macroeconomic issues, rather than anything pertaining to our industry or their own businesses in particular.

Should we keep doing this poll? If not, who should?

While I enjoy ruminating on the progress of the industry, I wonder if we should bother continuing to do these surveys in 2013 and beyond. From a business perspective, this data doesn't give me or my colleagues at WireSpring many useful or actionable insights. And since I don't like to sugar-coat the data, I feel like discussing potentially distressing results like the above might create a self-fulfilling prophecy, especially if it causes some companies to put their digital signage projects on the back burner. For better or worse though, this is still the only survey that I know of that continuously monitors not only the current state of the industry, but also tracks past results to see how honest we're being with ourselves.

Now, if somebody at the Platt Retail Institute could run a regression analysis on their past Digital Signage Index surveys, or if Exponation could do the same with their Quarterly Business Barometers, I could easily give this up. Unfortunately, Platt's data isn't free (unless you're a DSF member), and I haven't gotten a Quarterly Business Barometer survey in a while, so I don't even know if Exponation is doing them anymore.

What do you think? Are these Digital Signage Sentiment Index surveys useful to you? Should we keep running them in 2013 and beyond? Leave a comment and let us know!

+1 # Ed Personius 2012-11-30 20:00
I find the survey results informative and useful--please continue. I think, given the economic conditions, that this report is generally pretty optimistic, both in terms of current market conditions as well as projected view of the future. Thanks for your good work. My best to you Bill! Ed
+1 # steven keith platt 2012-12-01 04:51
Bill, as you know, a regression measures the extent to which two variables are related. Much as such a statistical analysis would be helpful, the problem is we have no other statistically relevant and reliable measure to benchmark our NADSI against? Panel shipments? Software sales? How about DPb ad sales? These either miss much of the market or are subjective. We run it against GDP, which is, I believe, the most reliable benchmark against which to compare. SKP
0 # Susan Musleh 2012-12-01 11:23
Bill, I too find the information you share an important barometer as well. The next generation of problem solvers needs the un-sugared data. I find your articles informative, and your perspective en-lighting. Please continue.
0 # Carlos Bages 2012-12-02 07:10
Bill, I'm really grateful that you provide us with those results. I understand that they are limited to USA, but as US market is leading the DS one, it gives a trend. Thank you very much for this great work. Carlos
0 # Lyle Bunn 2012-12-03 13:21
Full steam ahead Bill.. statistically relevance and a survey structure that can offer insights are both key.. It does mean more when the largest of ad-based networks or flat panel providers provide responses (rather than smaller more narrowly focused industry firms).. so please do offer some perspectives on just "who is saying what".. I applaud your initiative ! Lyle
0 # Marvin Goins 2012-12-12 08:08
I think that it is useful to gain general knowledge from the people who are directly influenced by it. They are the ones that the advertisements are targetted for so they are the ones who best know about this. The surveys will serve as a basis for future plans.
Refresh comments list
RSS feed for comments to this post
JComments