Tracking the Lingo: How Digital Signage Terminology is Evolving

Tweet
I've been going through the results from our last industry poll on what a digital signage network should cost, and I'm planning to publish the results of that study in the near future. In reading the responses, I noticed some interesting differences between the answers given by people who have worked on larger projects, versus those who have predominantly worked on smaller ones. I was obviously expecting to see some differences in terms of what people expected to pay for components, or which services were deemed essential (or not), but even the words used by these people in the course of their open-ended responses differed substantially. This got me thinking about the vocabulary and parlance that I use every day, and how I change it (or don't) depending on who I'm talking to.

Words that need to go away

A few weeks ago, Dave Haynes wrote a great post on his Buzz, Not Buzzwords blog about some common buzzwords and phrases that really ought to be shelved, at least during polite conversation. ("Best of breed", I'm looking at you.) It's one thing for press releases and marketing documents to use ridiculous phrases -- I think we've all come to expect that by now, and with practice we've learned to more or less ignore them. However, I'm still stunned when people tell me about their n-tiered, next-generation solutions in casual conversation (which also tells you about the kind of "casual" conversation I usually find myself taking part in). In addition to minding Dave's excellent list, I will be doing my best to avoid using the words leverage, dynamic and anything that has to do with synergy. I sincerely hope you'll try to avoid them too :) 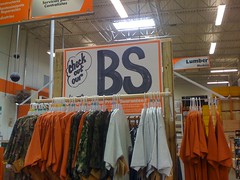 Image credit: Andy on Flickr
Long before I started running surveys and taking polls, it was evident that our industry had something of an identity crisis. One man's digital sign was another's electronic display. Captive audience networks were all the rage, until people started realizing that their audiences weren't really captive (aside from those few prison-focused applications). These days, digital out-of-home, or DOOH, seems to have become the de-facto industry acronym, despite the silly sound. But try using that on anybody unfamiliar with the industry -- including those folks who have done their fair share of smaller digital signage projects -- and you'll be greeted with blank stares, funny looks, or worse. Consequently, I stick almost exclusively to "digital signage" when talking about indoor screens and networks, and "electronic billboards" when talking about the big, side-of-the-road displays. From what I've seen of the open-ended responses of this last survey, it looks like most of you agree with that approach. I do find myself occasionally using the phrase "digital out of home," but only in the context of advertising, since "out of home" has been used commonly in ad circles for quite some time.

Referring to big networks versus small

In addition to the myriad words and phrases that could be said instead of "digital signage," I started to notice that those respondents who typically worked on smaller digital signage projects tended to use different words than those who worked on larger ones. Specifically, the folks from smaller projects more frequently used tech-sounding words like "displays," "screens" and "monitors," while those accustomed to larger projects almost never used such words. This might point to the different mentalities of the companies running each type of project. An AV integrator may have made a successful business out of installing digital screens for messaging in many of the local businesses, churches and schools in his area. But if the projects were heterogeneous and largely self-contained, he probably continued to think of them as technical installations of screens and media players. The function of the screens was ancillary. On the other hand, nobody is going to install a 2,000 screen network unless they have a very clear idea of what those screens will be used for -- and usually that means having some kind of digital signage content strategy. Consequently, large network deployers frequently used terms like "media" and "network" in their descriptions, which were uncommon in the responses from smaller integrators.

So while I'll start talking about more substantive results from the survey in the coming weeks, these preliminary, anecdotal findings have taught me that nothing -- including industry parlance -- is a truly settled matter in this business. Part of that is because as we grow, new people and companies from very different markets are getting involved, bringing with them their own perspectives and vocabularies. Plus, some people really just like to throw around marketing schlock, and apparently there's nothing we can do to stop them. I'm hopeful that somebody will eventually figure out how to prevent these people from synergizing their backward overflow dynamics. Until then, I'm leaving my BS filter on.

The difference in terminology for large and small networks is new and interesting to me. What terms do you use for the kinds/sizes of networks you're most familiar with? Leave a comment below and let us know!

+1 # Hugh Hanes 2009-09-11 00:20
I just call it "Display Signage".
0 # Stephen Randall 2009-09-11 00:48
Another excellent and insightful post! I'm afraid I'm about to add to the debate regarding the DOOH lexicon with the first of a series of White Papers covering mobile and social technologies in DOOH. Mobile and social interactive media is starting to appear on DOOH screens but before the gold rush of anything with the words mobile, social or interactive gets into full swing, brands, advertisers, DOOH network operators and event planners need to understand the many differences between systems that claim to support these new media buzz words. By way of an example, a pet peeve of mine is the annoying habit that some DOOH vendors have of calling their networks "interactive" when what they mean is they are "dynamic". The interaction of programming media does not make a network interactive! Neither, in my humble opinion, can a call to action for text messaging be called an interactive DOOH application - the interactivity happens on the phone, but not on the DOOH network. I'll Tweet when the White Papers will be available. Twitter: stephenrandall
0 # Bill Gerba 2009-09-11 01:34
Hugh: Interesting. That's a term I don't see often. How do you find your clients and prospective clients understand it when you're talking about it? Do they ever propose alternate terminology? Stephen: I understand your plight. Since we originally started out as an interactive kiosk company, I have a very solid idea of what does and doesn't qualify as interactive. Admittedly, the distinction is more fuzzy when you make your way into the digital signage space. So I'm definitely looking forward to your take when you publish your white papers.
0 # Manolo Almagro 2009-09-11 02:17
this post reminded me of that urban myth about eskimos having 100 words for snow... I get "pitched" to at least 3x a week, and I like to play a quiet mental bingo in my head about the terms that the salesperson uses. In support of your post, you can definitely tell how, big or small, or how established or start up a company is by the term they use to explain how their product fits into industry. in the end, resistance is futile, people are always going to use terms that make us cringe. We can only dream that a someday a term relating to digital signage ends up in the Merriam-Webster dictionary, did you know it only took the term Google (verb) 5 years to be adopted by MW as a actual legit word? - don't believe me? Go google it!
0 # Jayne 2009-09-13 17:35
Hi Bill, Just wanted to let you know that the first in Stephen's series of white papers (mentioned above) is now up on the blog and on the locamoda website for free download: http://bit.ly/S0BAl We'll be releasing the final 3 parts as exclusive co-releases with DailyDOOH on Sept.21, 28, and Oct.5. Thanks again for yet another very thoughtful and insightful post-- as always!
0 # Joanne Ladio 2009-10-05 22:15
I've been at this long enough to be grateful for the term "digital signage". In the 90's, it was extremely hard to get anyone to understand what you were talking about. I actually wrote an article called "I want one of those systems that have the monitors all over the place" which is exactly how it was expressed to me more than once. I called them messaging networks or communications networks but there were as many names as there were systems and companies, although it was a very limited market. The first time I heard the phrase "digital signage", I knew things would take off since users would be able to put a label on what they wanted! Now you can say "corporate signage" and "retail signage" and it's even clearer.
Refresh comments list
RSS feed for comments to this post
JComments