Tweet
If you're just joining us, the past few articles on this blog have focused on the challenges involved with testing digital signage content and what we've been trying to do about it. In short, WireSpring designed a simulation method that uses Amazon's Mechanical Turk crowdsourcing platform to test many variables at once and iterate through those tests a large number of times. We used this method to study about half a dozen different variables before presenting our initial findings at the 2011 Digital Signage Expo. Last week, we wrote about the results of tests #1-3, which covered color and contrast, message length, and ambient (environmental) lighting. Today, we're talking about the results of tests #4-6: the effects of screen orientation (portrait or landscape), visual clutter (environmental noise), and screen size on a viewer's ability to notice and recall an on-screen message. 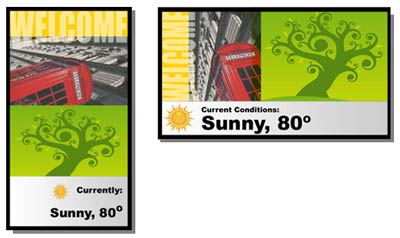 Over the years we've had lots of people ask which orientation -- portrait or landscape -- we'd recommend. Most were of the opinion that a screen mounted vertically (in portrait orientation) was more novel, and would therefore be more eye-catching. But to our knowledge no one had ever actually tested this, so we set up our own experiment. We tailored images of venues featuring portrait or landscape screens to preserve the size of the text on each screen (which I didn't do in this illustration, since it's nothing short of a black art getting images to show up at the right size in our blogging engine). All other variables, like color, contrast and background environment, were kept the same to make sure we were doing a real, apples-to-apples comparison. The results were quite surprising:

We've thought up dozens of hypotheses to explain why a boring, landscape-oriented sign might make a more lasting impression than an arguably more novel portrait-oriented one. For example, maybe viewers spend more time looking at the display instead of the message, looking at the visual elements instead of the text, or even looking at the screen in the environment to try and "make sense" of its perspective. My favorite theory, though, goes back to the notion of the active attention zone, a concept we looked at a few years ago. In short, we only pay attention to a small portion of what we look at -- usually just what's directly in front of us. Because our field of view is so much wider than it is tall, it may be that a horizontally-oriented screen fits more naturally into it, and we're therefore more likely to give it attention. This is hypothetical, of course, but does seem to fit in with some of the prevailing psychological models of visual attention, for what that's worth.

Question #5: How does the amount of signage and other clutter in an environment impact the recognition and recall of messages?

Visual clutter is a matter of major debate in the retail world. Every poster, POP display and retail fixture that's crammed into a store places more demands on shopper attention, and as a result, each such display has to be more compelling, unique, or just plain loud to stand out from the crowd. Major retailers like Walmart have tested different kinds of "clean store" policies, where they essentially police the things that brands put into their stores. We wondered how big of a deal this really was for the digital signage community -- after all, our screens are big, bright, and have movement and even sound (sometimes). Could they be relegated to the attentional dustbin simply by the sheer volume of complex visual objects vying for shopper attention?

We very unscientifically defined "clutter" to mean the percentage of pixels in each test image devoted to showing signage or other complex, attention-grabbing objects. This is a pretty subjective measure, so we worked hard to develop a group of images that could be meaningfully compared to each other. Then we fed the images into Mechanical Turk.

This was perhaps the most interesting -- and yet also the most obvious -- discovery in our analysis, and we definitely hope at some point in the future to corroborate it with real-world research. In essence, we found that the more cluttered the environment, the less attention the content on a screen got, no matter what that content was (within reason, of course). The implications are significant. If you're the best designer in the world and you've developed the most beautiful, amazing, alluring piece of content, people won't even notice it if it's shown on a screen in a cluttered environment. To give you some frame of reference, an image looking straight down a typical grocery store aisle would get about a 50% clutter score based on our technique.

To further test this result, we assembled a second group of images featuring a new kind of clutter -- people's faces. Since many studies have shown how an image of a human face can sap attention away from other elements in a scene (the so-called "vampire effect"), we wanted to see if the same was true in business and retail environments where you would reasonably expect to see people milling around near digital signs.

In this test, we featured images that had no people, one person, two people, or a group of 12 people. (There's no special significance to the number 12; we just wanted a lot more than two.) Once again we had an anomalous result, and amazingly enough, we traced it back to the same high-clutter images that caused the anomaly we uncovered when doing our tests on ambient lighting (as mentioned in last week's article). Once we adjusted for this, we found no significant difference in performance when there were people present near the screen content. In other words, a room full of "stuff" will sap viewer attention and make them less likely to see your screens, but a room full of people won't.

Question #6: All else being equal, does a bigger screen always translate to better message recall?

When we talk about screen size, most often what we're really talking about is the amount of our active attention zone that a screen occupies. After all, a six inch screen held six inches away from your face is going to be a lot harder to ignore than a 100 inch screen 100 feet away. The six inch screen, though much smaller, occupies a greater amount of our field of vision, so we devote more cognitive resources to processing it.

We know from past research that moving shoppers keep a roughly 20 degree field of view in active attention. Everything else is put into the periphery, where our brains don't spend as much time figuring out what's going on. Consequently, when placing digital signs in a venue, we always want to figure out common sight lines and traffic patterns to make sure that the screens are in that active attention sweet spot, for as many people as possible and for as long as possible.

So when we put together our test, we unfortunately didn't really realize how significant of an effect this would be. Consequently, we didn't think about testing the size of an entire screen. We instead focused on how much of a person's visual attention zone is occupied by just the MESSAGE itself (including any visual elements that the message might have contained).

Because of this, the percentages of the active attention zone were pretty small -- most messages only took a percent or less of the viewer's attention for the brief 0.8 seconds that they had to look at each image. The screen "area" occupied 5-8 times the amount of area as the message. Maybe because of this small area of focus, we didn't really see a significant difference between what people caught at 1% and what they caught at 4% or 5%. In the real world, that means if you have to choose between a less expensive 46" screen or a more expensive 50" one, all else being equal, you can probably save some money, go with the slightly smaller screen, and not suffer any ill effects.

Next week, we'll cover the conclusions and caveats, and discuss how you can use these results to improve the performance of your own content.

+1 # Bill Gerba 2011-04-20 13:40
On the subject of active attention I just read [[http://www.sciencedaily.com/releases/2011/04/110 419163211.htm|this article at Science Daily]], which notes that: "Contrary to common beliefs, the brain has a limited processing capacity. It can only effectively process about one per cent of the visual information that it takes in," [a professor in McGill University's Department of Physiology and Canada Research Chair in Visual Neuroscience Julio] Martinez-Trujilo said. "This means that the neurons responsible for perceiving objects and programming actions must constantly compete with one another to access the important information. "What we found when we looked at the behaviour of the neurons in the prefrontal cortex, was that an animal's ability to successfully accomplish a single action in the presence of visual clutter, was dictated by how well these units suppressed distracting information."
+1 # Dan @Digital Signage 2011-06-30 08:28
nice approach for testing the content
0 # hydravid review 2016-03-11 13:07
How can video marketing pack a big punch with restaurant customers.
Video marketing can be verry powerful when used properly.
Taalk to them through a problem, the associated emotions, and then relate how the product resolves each of them.
Refresh comments list
RSS feed for comments to this post
JComments