Selling Digital Signage Players: The Magician and the Technician

Tweet
For the most part, I've noticed that when we're selling kit to a client who's going to install and operate their own digital signage network, they don't really give the media player hardware a second thought. As long as the price is right, it's small enough, and it has a good warranty (and really, just as long as the price is right), it's good enough for them. Then there are the channel partners. Whether they call themselves distributors, resellers or VARs, they all seem to fall into one of two distinct categories: "Magicians" and "Technicians".

Once upon a time, computer skills were a rare commodity. The big, beige cases they came in were like mysterious obelisks, and those who could command them to do things were no less than magicians in the eyes of many. Fast forward to today, when my two year-old is already starting to hunt-and-peck and my tween neighbor's iPhone has a hundred times more CPU power than NASA used to put men on the moon, and it's clear that the technically capable have lost much of their mystique. But for all that, there are still a group of tech professionals -- the Magicians -- who rely on mystique to make a sale. When these folks come to us, they want to know what we can offer that's unique, unusual and decidedly different than what their own competitors are selling. Often, they'll focus on physical characteristics like size, or even demand a player that uses a RISC processor instead of an Intel or AMD, just so they have something that can still conjure a little bit of mystery when they show it off to their clients. The fact that it's much more difficult for a customer to get price comparisons for a unique product probably doesn't hurt either. 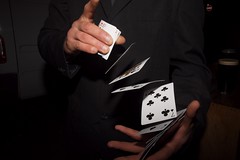 The sworn enemy of the Magician is the Technician. These folks are hell-bent on ROI, and are only interested in the things that will get them the most bang for their buck. In the digital signage media player world, that usually translates to fairly stock PC-like devices running off-the-shelf hardware. Technicians can still be swayed by a fancy form factor or tiny case, but only if it will let them shave a few minutes off an install because the smaller hardware is easier to mount behind a screen. Technicians also seem to really like having some optional components available (for example: more storage, better graphics, adapters for tuning TV signals, etc.), because they can add extra margin to otherwise thin deals.

Technicians rely on good deal flow to make ends meet. Because they're usually selling a bunch of commodity parts tied together to form a system, their margins tend to be lower than those of Magicians. However, because their products are typically easier to explain and thus more straightforward to sell, they make up it by being able to complete more deals in the same amount of time (in theory).

One size rarely fits all

Over the years, we've wracked our brains trying to come up with a product that would appeal to both Technicians and Magicians. At this point, I'm pretty sure it's impossible. We've had good luck selling embedded media players hand-built specifically for us. And we've had good luck selling "media players" with names like HP and Dell stamped into them. We just haven't been able to sell them to the same people. Today, a number of vendors make small form factor PCs specifically for the digital signage market. These systems look like anything but a standard computer, yet still have the right innards to run most off-the-shelf software. While some have found reasonable success in the field, most of those vendors are stuck in the low-volume world. Unfortunately, this causes problems for the Magicians and Technicians alike. The Magicians, often tempted by form factor and the allure of the "black box" that can't be shopped around online, tend to be fickle once they've realized that they're just buying regular (albeit small) PCs. They themselves turn into shoppers, going from vendor to vendor in search of the newest, coolest little box. The Technicians, on the other hand, have a hard time justifying to their clients why a small box from an unknown vendor should command a 30% price premium over an only-slightly-larger box from a big name PC company.

There's still room in the digital signage ecosystem for both the Magician and the Technician, just as there's room for both Macs and PCs in the desktop world. Price erosion driven by intense competition and relatively tepid demand definitely makes it harder to sell a tiny $1,500 media player whose main benefit is that it can do everything a $500 machine can do in 1/3 the space. But there are still clients who -- for whatever reason -- find that pitch appealing. Likewise, Technicians have to move a lot of inventory to make money when the price of systems gets pushed lower and lower. But falling prices bring new opportunities, since mass acceptance of once-esoteric digital signage means they can spend less time explaining, and more time selling. When it comes down to refining your own sales pitch, I suppose it comes down to a simple question: does your ability to close deals more often hinge on having a unique or unusual proposition, or simply a good proposition at a good cost? If it's the former, put on your top hat and tails: you're a Magician. If it's the latter, lace up your work boots, because yours is the Technician's lot.

Will the market be more kind to Technicians or Magicians in the near future? Is there still room for the hardware guys who specialize in low-volume, custom-built systems? Leave a comment and let us know what you think!