Tweet
While sitting on a plane recently, I had the opportunity to crack open a copy of Relevance, a new book by HUB Magazine's Tim Manners. Two hours and about 250 pages later, I realized that for the first time in recent memory I actually enjoyed reading a business book. This was quite gratifying, since the aforementioned plane was still sitting on the tarmac at JFK waiting for an electrical storm to clear. But back to the book: While some new "classics" like Purple Cow and Who Moved My Cheese? share interesting and occasionally novel ideas, on the whole they still feel a bit dry, and maybe even a little condescending. Relevance neatly sidesteps these problems by incorporating little vignettes and pearls of wisdom from dozens of top researchers, retailers and marketers. At the end of each anecdote, Manners steps in to sum up how it relates to the greater topic of relevance.

Anything with the word "actionable" in the title has to be silly business make-believe language, right? Usually, yes. But Relevance does actually deliver commentary and perspective that you can put to work in presentations, seminars, and even blog articles ;) For example, the book's very first chapter leads off with observations from Mike Linton, former CMO of Best Buy and current CMO of eBay. In a sentence, he more or less states that customer profiling is passé, and Best Buy doesn't bother with it. Marketing gurus from Netflix, Starbucks and even Walmart then chime in to agree that yes, demographics aren't nearly as important as they once were in determining in-store marketing strategy. Soon after reading the chapter, I used a two-page clipping to lead a two-hour seminar on customer profiling, tracking, and in-store privacy. People can (and will) argue with me all they want. But it's much harder when behemoths like these are espousing the very same argument.

Less is more -- but it might not be easy

In another segment, Manners talks about how electronics giant Philips decided that the best way to make customers happy with their advertisers was to simply advertise less. They tried to sponsor a "moment of cinema silence" by buying all of the available pre-roll advertising time in movie theaters in Boston and Minneapolis. Unfortunately, that particular plan failed when Screenvision (who runs the cinema ad service) thought they were mocking the concept of in-cinema ads. But continuing to think out of the box,  Philips went on to buy all of the ad time on an episode of 60 Minutes -- only to "donate" every minute back to the show so they could air longer segments. (Presumably, there was a "Sponsored by Philips" bug on the screen at some point.) They also used a similar approach for NBC's Nightly News with Brian Williams, cutting the typical seven minutes of ad time down to just one minute. I've successfully recanted this story a number of times when discussing ideal programming and advertising loop lengths for digital signage networks, and I think it's especially relevant when we're talking about waiting rooms and other long dwell-time areas. 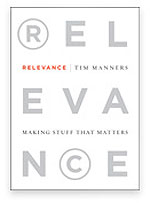 One last example of a useful anecdote comes from the book's chapter on advertising. While Starbucks has been down as of late (what hasn't?), it's hard to argue that they're not one of the most successful restaurant chains in the world. According to former Starbucks CMO Anne Saunders, "it really is about connecting with someone in a more intimate, experiential way that we think will have a longer-lasting ability to build affinity than a thirty-second TV commercial or an ad." Despite the company's recent hardships, I believe this is still relevant to today's media planning discussions. As you might imagine, quotes like these are pretty useful when talking with retailers and brands about the power of marketing at-retail, whether it be with sampling, POP displays or digital signage.

I've only covered three of probably close to 100 vignettes in Relevance, but I could go on at length about the other quotes, stories, facts and figures that I've pulled out of the book in the few short months I've had it. If you're a regular reader of Cool News of the Day or HUB Magazine, you'll probably find much of the material in Relevance familiar. Taking a cue from Seth Godin, Manners vetted most of his material in these two outlets before turning the content into a book. So if you have the time and inclination, you can probably dig up a fair amount of the source material for free, right over the web. But there are still some situations -- like when you're stuck on a plane going nowhere, for example -- when having a good, old-fashioned book in hand is hard to beat.

Has anyone else read Relevance? Have you put its recommendations to use in your own marketing?

+1 # Francois Reeves 2008-10-26 20:01
First, I'd like to thank Bill for providing a very thought provoking arena of debate that I discovered by chance one day. You always serve rich and engaging topics, food for thought. Now to answer, I think that digital signage stands to build on new paradigms. I don't know about negating traditional demographics but I have to respect the power of large organizations and their ability to support acute research. That being said, I believe that communities are the definite gold mine of DS. The more we think along those lines the more we will contribute to the establishing of the boundaries of our new media. I have a lot to say on the subject but this is not the place nor the tribune. Thanks Bill for being so intellectually awake. I will purchase this book because I like the snippets you exposed.
0 # Bill Gerba 2008-10-27 19:44
Hi Francois, Thanks, as always, for the feedback. And I'm sure Tim thanks you for the purchase as well ;) I agree with you - we continue to think that community-based networks -- so-called hyperlocal networks -- are the true sweet spot for DS as well. The challenge is making them profitable on the small scale before putting out massive amounts of capital for a larger rollout.
Refresh comments list
RSS feed for comments to this post
JComments