Content for Digital Signage: Motion and the Infamous Ticker

Tweet
Laura Davis-Taylor was nice enough to let me give a presentation on content optimization strategies at the Digital Signage Expo this year. While it turned into a 60-minute whirlwind of slides and sample clips that left more than one person's eyes glazed over, I actually received quite a few compliments and requests for the PowerPoint deck itself. I don't really like giving out PowerPoints, since a lot of my slides don't make much sense without a narrator. Instead, I came up with what I think is a better approach: I'll be sharing the contents of the presentation in a series of blog articles. Today, I want to start with some tips that our designers and partners have used to make on-screen motion that looks great -- without sacrificing clarity and readability.

A brief review of motion in digital signage spots

For anyone new to this blog, I translated last year's DSE content presentation into blog articles, creating a list of best practices for digital signage content creation. With regard to motion, I pointed out seven things to keep in mind when using motion (moving text or imagery) on your digital signs: Some new tips and tricks for using motion effectively

Image credit: Andrew Larsen
As you can see, most of the tips focused on improving readability. Why is that? Well, you could have the most recognizable and iconic brand imagery in the world (and I'm talking mouse ears or golden arches), but unless your message is actually readable on-screen, your content isn't going to be performing up to its full potential. From a practical standpoint, I'd like to add three more items to the motion checklist: Should you include a ticker? Let's check the research 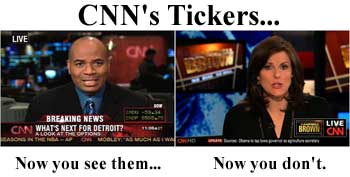 Oh tickers, how misunderstood you are. It's no wonder I get so many questions about using scrolling tickers. They look cool. They add motion and interest to static content on screen. And even though CNN toned down their tickers, they're still in full force at CNBC and other networks. Tickers seem to be quite popular, so they must be effective, right? Well, the truth is that unless you've got content that everyone is already used to looking at on a ticker (such as stock quotes), then a ticker is more or less the worst way to display it on screen. I've done a bit of research on the subject, but thankfully the boffins at Georgia Tech, Virginia Tech, Cornell, IBM and others have done many more in-depth experiments to determine the efficacy of using tickers to disseminate critical messages. This is a surprisingly popular area of research, probably because ticker displays are often used as notification systems that provide emergency/interrupt information to people performing primary tasks. The key takeaways from their studies are as follows: However, a scrolling ticker might make sense in certain situations. For example, dwell zone screens where a viewer will be waiting for more than 3.5-4 minutes (and will thus experience time dilation) are a suitable candidate, since it might actually be better to occupy the viewer's mind with a more challenging mental problem. Similarly, locations where there are no other distractions nearby would be acceptable. However, once you start talking about complex environments with lots of motion, other kinds of displays, and the like, a ticker is going to be an inefficient way of getting your message across. Don't believe me? Then just ask Earl K. Miller, a professor of neuroscience at MIT. As he explained to the New York Times, viewers may think that they can process it all, but they're fooling themselves. "A lot of times, when you think you're multi-tasking, you're just switching your attention between one or two or three things," he said.

Want to see some examples of great (and not so great) content?

There's one day left to vote for your favorite digital signage content over at the 2009 POPAI Digital Signage Viewer's Choice Awards. Even if you don't want to vote (for some reason), there's over a half hour of digital signage content online for you to review. Some of it is truly great. Some of it could probably use a pass or two through some of our best practices. But if you're a designer or creative director -- or even if you work in ad sales -- I suggest you take a look through the reel of content to see how other people have approached the problem of getting their message out on the moving screen.

One other note: the folks at Strategy Institute are giving readers of this blog the opportunity to attend their 4th Annual Content Strategies Summit at a nice discount. The lineup looks pretty good, with Al Witteman from Tracy Locke, Christopher Gray from Saatchi X and Doug Bolin from Razorfish speaking, just to name a few. If you're interested in going, the discount code for our readers is WST10, which will entitle you to a 10% discount on top of the $500 early bird discount (which ends on March 30th). Perhaps I'll see you there!

Moving text and tickers are a hot-button issue in our industry, and something we continue to research. Do the points above match your experience, or even just your "gut feeling"? Leave a comment to let us know!

0 # Jeremy Gavin 2009-03-19 21:39
Well put. I'm certain our industry embraced tickers, not because it will cause users to glance at the screen but because it was extremely simple to add to software and very easy for users to implement. Moving breaking news via RSS is easy and should be done - but I'd much rather see a large headline and a paragraph of the story or a headline and a large photo when viewing a screen.
+1 # Nikita 2009-03-22 18:05
Its a helpful topic. u may find some more over [[http://www.advertisingb2b.com|Advertising and Marketing Suppliers]] Regards Nikita
0 # bruce 2009-03-23 02:56
I like what CNN did, they evolved. The all news network and many others gave rise to the scrolling ticker in the days following 9/11 and it was good, at the time. Now CNN has introdued the "flipper" which is viewed as simpler and easier to read since it presents static text one item at a time rather than a continuous crawl. Digital signage should evlolve as well.
0 # Bill Gerba 2009-03-24 14:37
I definitely agree - a scrolling ticker gives the **impression** of lots of information coming across. I've never done a formal study, but I'd bet that people would say they "felt" more informed when watching a screen with video ticker rather than video alone, even if they didn't absorb any more info from the ticker (and potentially even less since their attention would be divided). But with data firmly in hand, and tech at the ready to deliver smooth, customizable fades, blasts and other means of moving text on and off the screen, it's time to move on to formats that are proven to work better (and look nicer, in my opinion).
Refresh comments list
RSS feed for comments to this post
JComments