Tweet
This past week brought two more stories of consolidation (and potential growth, I guess?) in the digital signage industry: RMG Networks completed their long-planned acquisition of Symon Communications, and Care Media Holdings (operators of KidCARE TV, PetCARE TV and Women's HealthCARE TV) bought content production company Saddle Ranch Digital as CEO Phil Cohen took the reins of yet another network. While both deals are interesting for their own reasons, I think that in terms of strategic value, one has a far better chance of success than the other. And rather than wait to discuss these transactions in the context of a larger M&A roundup (see our 2008-2010 M&A list and our 2011 M&A list), I'd like to dive a little deeper into these deals while the ink is still fresh.

RMG was formed when IdeaCast (previously owned by probably the most profitable DOOH company ever, National CineMedia) merged with Danoo (which was funded by VC mega-firm Kleiner Perkins Caufield & Byers). The company quickly streamlined their operations, focusing on a suite of reasonably competitive digital signage products and services, and (more importantly, for now) the operation of several large though heterogeneous DOOH networks. 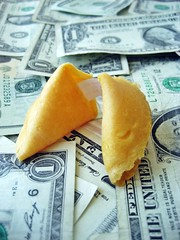 Image credit: Images Money on Flickr
A few months ago, it came to light that RMG would "go public" by completing a merger with an already-public but not actively operating shell company (if you've heard the term "shell merger" before, that's what it means). While the more public and popular means for launching on the NASDAQ or another public exchange is to do an initial public offering, shell mergers let you bypass some of the costly mechanics while still achieving basically the same end result: the ability to raise money on the public market, and the ability to provide shareholder liquidity. Both of these are important for RMG, since their CEO Garry McGuire already indicated that RMG expects to achieve 100% growth through acquisitions (which takes cash or reasonably liquid stock), and also because VC firms like Kleiner Perkins really like to get their money back, as do management teams that get paid reams of stock while a company is still private.

Of course, going public has its challenges, perhaps the most important of which is that fickle investors can tank your share price if they don't like what you're doing. A low share price makes it harder to raise money or provide liquidity for existing investors, which of course defeats the purpose of going public in the first place. To that end, RMG announced a while back that they would be buying Symon Communications, a pretty successful (and by our industry's sad metrics, large) player in the digital signage software field. Symon brings a steady cash flow that will let RMG smooth things out as they continue to expand. This week, the newly combined company announced the merger was complete, and the company is trading at about $15/share as of this writing.

Meanwhile, in what was probably a much smaller deal, CARE Media Holdings, a DOOH network operator, announced that they'd be acquiring Saddle Ranch Digital and also taking a controlling interest in AMHN. Saddle Ranch has provided content for CARE's networks for a while now, but was rumored to have few other profit-generating customers. CARE CEO Phil Cohen, being a content guy himself, probably picked up the company (or its staff and assets, most of which he was already using anyway) on the cheap. He then turned right around and made himself CEO of AMHN, which if I had to guess, will be able to make use of some of the same content creation services.

The CARE-Saddle Ranch deal is a classic example of vertical integration, where a company can gain efficiencies by taking a critical function that was previously outsourced and bring it in-house. In this case it's unclear whether CARE intends to continue selling Saddle services to new customers or whether they'll just continue to service existing ones. But my guess is that between the CARE and AMHN networks (Phil Cohen's new digs), there were enough potential savings by bringing the creative talent home to make that a non-issue. Likewise, by taking the reins of another set of DOOH networks, Cohen stands to gain more efficiencies, even if he never formally brings them under the CARE Media umbrella. As we've learned from past WireSpring pricing and staffing surveys, DOOH networks actually scale up pretty well from a workforce perspective. So while it can be an expensive proposition to start a new network, growing it -- even significantly -- doesn't tend to require a linear increase in staffing expenditures.

On the other hand, while RMG can certainly grow through acquisitions, that strategy doesn't necessarily lead to the growth and sales numbers that shareholders in a new public company expect to see. To wit: picking up Symon made good business sense from a cash flow perspective, but it has little strategic value since RMG already has (and sells) a software platform. They'll now either have to do double the work on software maintenance, or do a rip-and-replace of one of the two platforms. And either way, digital signage software sales are not going to be enough to keep them in the public limelight. It's also unclear how successful their current DOOH strategy has been, or whether they'll be able to gain the necessary traction with agencies and advertisers. The market has been rough on media companies lately, and agencies have not been kind to the DOOH sector (or outdoor in general), so I don't envy RMG management for having to juggle the task of growing their small (by NASDAQ standards) business into a large and stable company, while still meeting quarterly targets well enough to keep shareholders happy.

RMG's approach probably has greater pure upside potential in terms of the raw number of dollars that might ultimately be generated, but from my perspective it's also much, much riskier and failure-prone. On the flip side, CARE's buy-and-integrate approach certainly doesn't work in every situation, but I think that given the unique dynamics of their current portfolio of networks, and the way our industry functions (and is wholly reliant on great content), CARE has chosen a safer path without sacrificing the upside potential.
JComments