Tweet
About 18 months ago, just as the true scope of the economic crisis was becoming known, many in our industry wondered how a global downturn would impact the adoption, acceptance and growth of digital signage and related technologies. Many predicted a near-catastrophic decrease in demand. Others (and oddly, most of the "research" companies) renewed their expectations for hyperbolic, high double-digit growth. I think most of us expected a decrease in demand that might slow growth, but couldn't possibly stop it entirely. But one thing seemed certain: any sudden change in the economy would probably signal a new wave of mergers and acquisitions that would bring some much-needed consolidation to our industry ecosystem. Eighteen months later, has that prediction come true? Let's take a look at the data.

To merge, or not to merge?

Before we get into who's been doing the buying, selling and folding, I'd like to pause for a brief history lesson. Back in the dot.com heyday of the late 1990s, companies with no customers, products and revenues to speak of were merging left, right and center out of fear. At least, that's what it looked like to the casual observer. Many dot.com execs believed that passing up an opportunity for growth through acquisitions would lead to certain death by asphyxiation, as they'd be squashed between newly-merged megacompetitors and a drove of upstart startups plotting from their dorm rooms. But as the bubble peaked in early 2000 and the recession of 2001 took hold, we witnessed a new kind of tech-driven M&A strategy: the roll-up. A roll-up is simply when an acquirer (who might be a cash-rich company, a holding company, or an institutional investor) buys up a bunch of competitors in a market with the goal of achieving economies of scale. In other words, they keep all of the acquired companies' revenue sources (i.e. customers) while reducing operating expenses. Unfortunately, a lot of these deals turned out badly, as overeager M&A firms suddenly discovered just why so many companies had no products, customers or revenues to speak of in the first place. 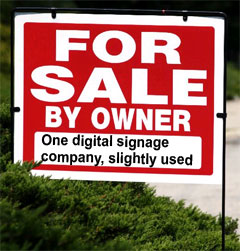 Fast forward to today. While the digital signage industry is nowhere near as large or overinflated as the dot.com guys were a decade ago, we do face many of the same problems as our tech brethren did. At present, we have a large pool of vendors serving a fairly small pool of clients. Because of this, many try to "create" demand by hyping the industry and making impossible claims. Despite the existence of four not-for-profit groups that serve our industry, we still have significant problems with basic items like terminology, cost/benefit analysis and technical standards. Meanwhile, many of the A-list networks in the space routinely have revenue problems, punctuated by layoffs and new rounds of investment just to keep the lights on. On both the vendor and network side, far too many companies are too reliant on equity investments to stay afloat, let alone thrive. Heck, some of the biggest names in our industry have found themselves scrambling for cash in the past year or so.

What sort of mergers, acquisitions and bankruptcies have we seen lately?

In a quick and totally non-exhaustive search, I came up with a list of 41 merger, acquisition and/or bankruptcy events that have taken place since August 2008, which is roughly when the true effects of the global recession became noticeable. (Special thanks to Adrian Cotterill for his help -- this research would have been a lot harder without the DailyDOOH archives.) I know there are others beyond what I've included in the list, because I left out several deals in China, Japan and Taiwan that I'm aware of, and that's just for starters. Regardless, I think we can all agree that 40-or-so deals in an 18-20 month time frame is pretty significant in an industry where a six-figure customer contract is still considered "huge." So without further commotion, here's my list of acquisitions, mergers and bankruptcies that have taken place since August 2008, presented in alphabetical order: For many, being on this list isn't exactly a good thing. In fact, more than half of the companies listed were acquired out of necessity, or simply went out of business. Yes, there were a few bright spots. Zoom Media & Marketing, for example, has been clearly and aggressively pursuing growth through acquisitions. Others, like National CineMedia, used their strong balance sheets to make forays into strategically valuable markets on the cheap. But most, sadly, were either reorganized, acquired, or simply imploded due to insufficient cash reserves, poor planning, skittish financial backers, or some combination of the three.

Whereas the roll-up strategy was pretty ineffective after the dot.com implosion, it could do somewhat better in the DOOH marketplace. The most obvious case would be when network owners (like Zoom Media) expand by acquiring venues and screen real estate for far less than the cost of buildout. But even tech vendors stand to gain. Netkey, for example, had been strong in the interactive kiosk market for over a decade, but had very little presence in digital signage. An inexpensive purchase of Webpavement, who was rumored to be foundering at the time, solved that problem. More importantly, it gave them a more complete slate of offerings, which ultimately contributed to them getting acquired by NCR.

Where will the next batch of M&A activity come from?

The deals listed above, along with the others I've missed, have brought some much-needed consolidation to our space. But I don't think we're done yet. I expect the frequency of deals to decline a bit in the coming months, but I believe we'll still hear about a few big surprises before the year is out. Stratacache is still sitting on most if not all of its $25M strategic investment fund. Navori has been making noise about expanding (through acquisitions) into the US market. And, as Adrian likes to remind us of frequently, PRN is going to be bought by someone, and that someone is suddenly going to inherit one of the largest DOOH meta-networks on Earth.

Lower costs, better acceptance, and a re-centering of expectations will drive more money into digital signage in the next 18-24 months. Combined with the re-emergence of venture capital and private equity funds -- who had all but disappeared from my radar up until about a month ago -- the revitalization of the global economy should bring with it a new wave of organic and transactional growth in the digital signage market.

Did I leave out any notable transactions from the list? If you know of any that I missed, please leave a comment below. With your help, we can turn this page into the most comprehensive M&A list for the industry.