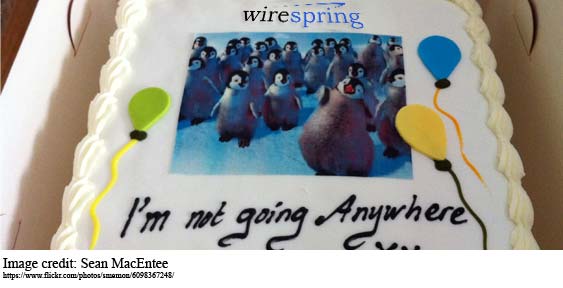 Back in 2004, before the word "blogging" had been added to the Meriam-Webster dictionary, I decided that I needed to exercise my right brain. Years of reading over source code and marking down spreadsheets left me with the distinct feeling that I was no longer able to write cogent, English sentences. And considering that I graduated with a degree in cultural anthropology (of all things), that was more or less the one skill that I knew I took with me when I left college. So, I started this blog as a place to not only dump some of the information I gathered while researching the digital signage industry, but to also practice articulating my thoughts -- you know, in case anyone ever asked.

Fast forward a decade or so and astonishingly enough, my company (WireSpring) is still going, and going well at that. but that, unfortunately, means I usually don't have much time to blog anymore. From one perspective hat's ok, because plenty of other people in the industry took up the task -- and have done a much better job of it. Still, after taking all of 2014 off to actually get some work done I feel a bit sad that I didn't quite make it to the 10-year mark. I also noticed a definite decline in my ability to write on a deadline. So I've decided to try my hand at this blogging thing again. I don't think it's practical to shoot for one article per week like we did in years past. Nor do I think we'll be bringing back some of our more labor-intensive article series either (Articles about the Cost of Digital Signage -- I'm looking at you). But recently there has been a lot of actual innovation in the "Internet of Things" arena, including some pretty unique new technologies and business models floating about in the digital signage space, all of which has left me with plenty of blog fodder (in fact, I've set up a sister blog called M2M Insider to take a look at the application of devices that are not digital signs because there are so many).

In the mean time I've started jotting down some thoughts on upcoming articles for the digital signage industry, starting with some kind of recap of the M&A activity since 2012 (the last time we wrote 2011-2012 Digital signage M&A activity), rehashing some past research on digital screen placement and viewer attention using new data, and maybe talking about/demoing some of the more interesting tech that we're working on right now.

I'm also considering a new tagline for the blog. In the running are:

Digital Signage Insider: A blog so good it took 11 years to write 10 year's worth of posts!

Digital Signage Insider: It used to be relevant *and* funny!

and my personal favorite

Digital Signage Insider: Keeping Bill busy through *all* of his 20s and 30s!

I'm not attached to any of them yet, though, so if you have a suggestion, I'm all ears.

0 # neuroxium side 2015-06-26 16:26
Heya i'm for the first time here. I found this board and I find It truly useful & it helped
me out a lot. I hope to give something back and aid others
like you helped me.
Refresh comments list
RSS feed for comments to this post
JComments