Intro from Bill: I had a chance to grab dinner with Michael Arnett after the close of the Digital Signage Expo last month. For those of you who don't know him, Michael has been around this industry for a long time, starting as the digital signage sales manager for Matrox -- back when they were highly focused on the digital signage market. Like two old curmudgeons sitting on a park bench, we spent a good two hours trading stories about ridiculous projects, unrealistic customers and impossible technologies. You know the sort. Heck, if you've spent more than a few minutes in the digital signage industry, then you probably already have plenty of similar stories of your own.

It was this sort of shared schadenfreude that ultimately compelled Michael to write this article. Well, that, and the opportunity to plug his new consulting gig, no doubt. But I think what follows will resonate with plenty of people who have ever spent time in our industry. Without further ado, I'll pass the microphone over to Michael: 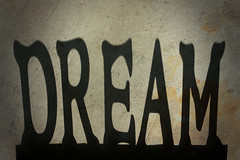 Image credit: gfpeck on Flickr
If you've dealt with customers in the digital signage space as a supplier/vendor/solutions provider, chances are you've come across them. They're excited. They think big. They live large. They love talking about ROI. They're your next big meal ticket, they say, and they're counting on you to take them into the stratosphere.

"They" are the dreamers, the ones who are just as likely to invest in get-rich-quick infomercial packages as they are to conjure up self-funded, self-sustaining, high-volume digital signage networks without thinking things through. And despite more knowledge, more education, and more competition than ever before, they still loom, hoping to land a big money fish without a rod.

Some are easy to spot from a mile away. Others are wearing sunglasses, hiding somewhat in disguise under their chosen entrepreneurial hat of the day.

Nevertheless, they usually begin with an e-mail describing some big opportunity that needs immediate attention. The email quickly graduates to a phone call (or calls), where we start to see some of the telltale signs -- high volume rollouts. Rushed timeframes, usually in the next 6 months. No visibility with decision makers. No relevant experience. Ad-funded, without advertisers lined up or even made aware. Content as an afterthought. Funding ambiguous at best. Locations non-existent, but on radar through forthcoming sales pitches and expansion plans. Lead with price and the rest doesn't matter. Support to come from partners who haven't been contacted yet. And so on.

It's easy to know when to say no and simply move on when it's obvious that any of your time invested will yield a giant goose egg as your revenue.

But it's not always plain as day. Sometimes there's some merit to what you might think is a dreamer's Hail Mary approach, usually through a personal connection, inside information or indirect business parallel. To help weed them out from the realists -- on the most basic level, those who have numbers, timeframes and a story that make sense -- consider exploring: It's never a good idea to turn away business prospects, so respectful diligence through the usual sales qualification questions is always a must. It goes without saying, however, that it's always a good idea to protect your company's valuable time and resources. To that end, I've put together a little digital signage project reality checklist (PDF download) to help companies evaluate new prospects.

Over dinner with a successful industry executive at DSE, we were swapping stories about how, rare as it may be, a couple of the larger deals we've seen stemmed from small business folks outside digital signage who were simply in the know, at the right place, and right time. Just as it is in the real world, people know people, and DS is "know" different.

Michael Arnett is an independent consultant focusing on sales and business development within the digital signage space. His company, Aurora Dynamic, is based in Montreal. (Aurora Dynamic is not affiliated with WireSpring.)

0 # Anthony Walker 2012-04-05 19:15
Bill - good solid information, I hope you don't mind if I tweet it out. Thanks.
0 # Bill Gerba 2012-04-05 20:51
Hi Anthony, Please do. And stay tuned for more insights and commentary from Michael Arnett. I think he still has a few bones to pick...
-1 # Steve Gladden 2012-04-05 22:35
Ditto on almost every statement - but with regard to the large format touch screen market. Telltale signs are similar, minus the ad revenue wish list. How to know when an interactive deal is unlikely: 1. Content is scheduled to be the company's website 2. Requests multi-touch, but isn't really sure why or how the multiple points of touch will be leveraged 3. Continually asks for clarification on the "touch screen software," but isn't referring to an application, but rather the "software" that makes the touch screen go (99.9% of touch technologies in LFD are HID/USB compliant). 4. Assumes the technology is resistive or capacitive (you know, the technology from the 70's and 80's) 5. Gets sticker shocked when the word thousands leaves your lips. Yes, i once had a "big lead" for an 82" touch monitor, and he couldn't understand why it was more than $2500 6. Refers to the display (no matter how many times you correct him) as TV's. Thanks for the article Bill and Michael. Good stuff as always. I am going to repurpose that sales checklist for our sales team, if you don't miond. And i'll likely Tweet too!! Ciao, -Steve
+1 # Bill Gerba 2012-04-09 16:09
Hi steve, Thanks for the comparative info :) In fact I'm sure there are hundreds of industries that parallel ours with regard to having too many dreamers, but I guess that's a consequence of being in a 'hot' space, right?
Refresh comments list
RSS feed for comments to this post
JComments