Last week's article on the DOOH Advertising Paradox generated some interesting comments, so I'd like to continue with the ad sales topic and look at some of the techniques that we've seen people use over the years. Ad sales continues to be a major challenge for many DOOH networks, even as they reach so-called critical mass (e.g. 100 or 1,000 screens, or a presence in the top 20 DMA's, or some other threshold that media buyers dictate). Taken as a whole, the growing number of screens in the DOOH marketplace may even be contributing to the problem: supply is increasing more quickly than demand. Today, I'll be covering a few strategies that our clients and industry colleagues have used to bolster their sales.

There was a bit of confusion over the convenience store example I used last week. As Dave Haynes succinctly wrote in a comment:

Where I stumble a little is on the screen placement and viewers thing. Why would screens at 15 feet up be three times as noticeable as screens at five feet? (And do people really put them THAT high??? If so, that's loopy). The OVAB guidelines (if you take two or three weeks and read them) talk about presence and notice, and I would probably argue 10,000 may be in the presence of the screens way up high, but only three in 10 people would notice them... if that. 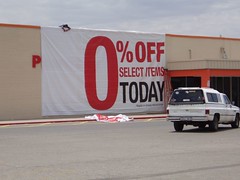 Image credit: Cosmic Kitty
As I responded to him, the example of having screens placed at 15 feet, 10 feet or 5 feet above the ground was merely an illustration, and was not really meant to indicate what people are or aren't doing in the field these days. With that said, I've definitely seen screens hung at least 14 feet above the ground, so I don't think it's too far off the mark. Likewise, the "hit counts" for each of those screens were really just my own guesses, using numbers that would make my example math easy. However, suppose that the hypothetical C-store had 15,000 visitors/month, which is a bit low, but still a fair guess. At that low level of traffic (500 potential viewers/day), if 2/3 of visitors had an opportunity to see your screen, that would yield about 10,000 potential viewers/month. That's probably in the right ballpark for most above-the-counter screens. So while my guesses on traffic and percentages of people who had the "opportunity to see" were definitely not statistically rigorous, I don't think they were too far off the mark. And in reality, the point of the argument was to show the relationship (which in the real world is almost certainly non-proportional and non-linear) between screen placements and opportunities to see. If you're trying to sell to any medium- to large-sized advertiser, this data is by far the most valuable component in a classical CPM measurement, which itself is by far the most popular measurement metric in use.

Hopefully this clears up any remaining confusion surrounding last week's article. Now, with that out of the way, let's talk ad sales strategy. In general, your business is going to require you to sell into one of two groups: advertisers who handle their placements directly, and those who go through some kind of broker or planning agency. The tips below are mostly aimed at the first group, since planning agencies in particular seem to work with their own set of rules, and those rules seem to change... constantly. (If you're interested in learning how agencies approach DOOH campaigns, check out our article on getting advertising agencies to understand digital out-of-home, which we published earlier this year.)

First and foremost, stop thinking about local and regional ad sales as an also-ran. The companies closest to your screens can be your greatest allies and revenue sources. On the downside, it means you need to handle sales at a local level, which often translates into more time-consuming sales activities. While I don't think there's any way to avoid that (especially when you're first getting off the ground), you don't necessarily have to handle it all by yourself. There are still plenty of miniature ad sales teams working on a local level (think local newspapers, coupon booklet printers, church bulletin writers, real estate magazine publishers, and so on). While they're not about to give you something for nothing, there is an opportunity to make a deal with these people, since you have something unique to add to their sales package (namely, your unusual viewing format and screen real estate).

You don't have to stick to "real world" advertising partners, either. Look around and I'm sure you'll find at least a few locally-focused websites that depend on ad revenue as well. Your best bet here is to stay away from big, national sites with local portals (e.g. CitySearch or Superpages) since they're not going to talk to you unless you already have a very large footprint in a number of their most important DMAs. However, for every CitySearch there are likely a dozen smaller sites that focus specifically on your city or region. These guys are going to be more amenable to talking with you, again because you have something unique that may allow them to wring a few more ad dollars out of their advertisers (and might even help them win some new sales). Of course, this is all predicated on your ability to...

People who buy print ads are used to buying print ads. Same goes for those who buy web ads. But you're selling DOOH ads, which are a different beast entirely, with their own unique set of advantages and disadvantages. The downside, of course, is that you have a lot of explaining to do at each and every new client or prospect meeting, since nobody is familiar with your unique format, duration, venues, etc. The upside, though, is that the kind of ads that you're selling are clearly different from any others the prospect is already buying. If you articulate DOOH's strengths properly, it's a hard argument to counter. The key is to start out by making your screens complement, and not compete with, your prospect's other forms of advertising. This ties right back into Tip #1 above about finding partners. By creating a unique media mix (say, combining a quarter page print ad with a 10-sec DOOH tower spot, or a full-page print ad with a 15-second full screen spot), you and your partner now have something unique to offer to the marketplace. By diverting a bit of your revenue to your print partner, he gets a little incremental uptick, as well as a new carrot to dangle in front of potential advertisers. You, of course, get a quicker introduction to a number of companies who are already comfortable with the idea of local advertising, which theoretically should translate to a wider and faster sales funnel.

Of course, any reliance on small, local businesses means that you're inevitably going to run into a situation where your new client has no content prepared for your screens. This isn't uncommon in the print world or the online world either, so I recommend you handle it in much the same way: offer an affordable (or free) low-end content creation service bundled into the ad sale itself. Newspapers and websites often have some basic templates and copy writing services available, and if the client wants anything above and beyond that, they pay some additional fee. The goal here is to essentially remove one more barrier to the sale. The low-end content creation offer acts as a loss-leader and sale enabler, while higher-end creation services (which you can offer yourself or outsource) should be cost-neutral at worst, and quite profitable at best.

While content creation isn't trivial -- far from it -- I've found that most small DOOH networks always have a person or two on staff who are doing content and marketing work anyway. Thus, the additional load from new advertisers (who aren't going to be coming in droves no matter how hard you sell) is more than offset by the said advertiser's revenue. A small library of templates can be built ahead of time, and by using our proven tips and best practices for creating digital signage content, even a modest amount of creative work can translate into a spot that will perform well and have your advertisers coming back for more.

Well, this article is already quite a bit longer than I anticipated, and I'm only halfway through what I wanted to cover. Instead of plowing ahead, let's break for today and pick up next week with some tips for improving direct ad sales, and a brief discussion of the ad/network aggregator landscape.

To everyone in the US, have a happy Thanksgiving and safe travels. To everyone outside of the US, I strongly recommend you lobby your governments to create a national holiday devoted to eating. I'm telling you... it's pretty hard to beat :)

Have you tried out a particularly unique, creative or just downright strange approach to selling ads on your DOOH network? Leave a comment below and tell us about it!

0 # Mike Mehlmann 2009-11-26 16:18
Do you know any companies that are doing a good job selling hyper local advertising?
0 # Bill Gerba 2009-12-11 19:00
Hi Mike, As far as networks go, supposedly Danoo (nee RMG Networks) is doing a respectable job, though I don't have any numbers to back that up. Ripple TV (nee Targetcast) was also supposedly fairly successful, but recently they've been struggling a bit, so I guess not quite successful enough. There are a number of smaller networks that I'm familiar with that do a good job of it, as does Captivate, who has a combination of national and local (though not-quite hyperlocal, unless you count venue) news and ads. Sadly, I don't know of any agencies that specialize in this kind of service, though I bet there's room in the marketplace for some.
+1 # Jeff Montanye 2010-07-08 11:12
We just launched a new website which is a directory of small digital sign businesses. We are looking to get everybody to list their signs in one big directory. If anybody is interested feel free to visit.
Refresh comments list
RSS feed for comments to this post
JComments