The DOOH Advertising Paradox: Better Spots Are Harder to Sell

Tweet
I received a trio of comments and another trio of emails over the past few days that converged on two topics: pricing/buying/selling ad space, and picking the appropriate size and number of screens for a given venue. In fact, people ask me about both of these things quite frequently. While my in-person answers generally take into account the unique situations of my questioners, I thought it might be useful to lay out some of the basic arguments and logic that I use to make my recommendations. 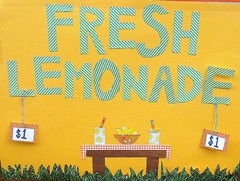 What do you think would be the best use of digital signage within a small store such as a convenience store, supported by advertising? From an advertiser's point of view, is option 1 or 2 better in your view?

Option 1: A number of smaller (13"-15") screens at shelf-mount or endcap at just around eye level

This one is pretty straightforward. Except in some very specific scenarios, shoppers simply will not look up. We've studied so, so many networks where screens were dropped from the ceiling (and let's face it, that's how most of them have been done up to this point), and the uniformity of our findings has been pretty remarkable. As we noted in our article on Digital Signage Screen Placement: Modeling Consumer Behavior, people like to look down on their purchases: we pick things up, hold them in our hands, and generally look down at them while doing so. Additionally, in our article about Digital Signage Screen Placement: Angle, Height and Text Size, we found that putting screens high up can increase the raw amount of time that the screen would be visible to the average shopper. However, it actually decreases the amount of time that the screen will lie in the shopper's zone of attention.


So here's my short answer. From an efficacy standpoint, you'll almost certainly see better results with the smaller screens on the endcaps and/or on the shelves, if your host venue will let you put the displays there. That's prime sales space for them, so the typical retailer is loathe to give it up for screens. But you might get lucky, or you might be able to reach some kind of compromise. The second part of your question, though, is which approach advertisers will prefer. That brings up another set of considerations.


The best-performing DOOH ad placements may be harder to sell

How do you price and sell ad space on a digital signage network? This is, hands down, the #1 question I get asked, which is ridiculous considering that I've never sold an ad in my entire life. However, having worked in advertising for a while, and having been party to a number of transactions over the years, I've carried away a number of observations that leave me scratching my head whenever anybody asks why their ads aren't selling, or what they could do to improve sales.

What do I mean? Well, let me give you an example using the convenience store scenario that Lisa asked about. I'm 99% positive that a number of smaller endcap or eye-level screens will perform better (i.e. relay more information to a greater number of shoppers) than a few screens placed high above eye-level. We simply have too much data indicating that. However, depending on who your advertisers are and how they like to buy spots, the performance advantage might not actually matter (initially, at least). That's because big advertisers are still likely to use a very broad metric like CPM when making their purchases. Since you can probably make the case that having big screens up high will result in a much higher number of viewers, that translates to a much lower CPM if the cost-per-spot remains the same. So, it may seem like a better deal to your CPM-happy advertisers. As a hypothetical example, say that you, the network owner, wanted to charge $100 for an ad. You might find yourself running into a problem like this:


Basically, the entire digital out-of-home industry has a big problem: the best performing ad placements are usually harder to sell, because the raw number of viewers is low and the CPM is high. But on the flip side, if nobody watches the ads on the poorly-placed screens, nobody will act on them, so the advertisers will eventually pull the spots anyway for being ineffective. Because most media planners (the guys in charge of big, name-brand media buys) aren't generally able to "follow" a shopper from ad view to eventual sale, they can't know if a spot on a digital signage network is worth a higher CPM unless they try it out -- or somehow glean data from other advertisers who might have tried it out before them. Consequently, many networks rely on smaller advertisers to fuel the bulk of their sales. These guys are not only more accessible than a Coke or a Nike, but often they're better able to track their media investments (because there are fewer spots to keep tabs on).

So as the owner of a DOOH advertising network, your choice of screen placement may have a direct impact on your ability to price and sell your ads. However, relying on a placement that yields a lower CPM can be detrimental in the long run, especially if the screen is placed in such a way that the ads you do sell won't be effective. If you have the luxury of placing screens at various heights, you might be able to convince your advertiser to run some split tests to prove that some screens actually work better than others. But let's face it: that's probably not going to happen.

There's a lot more to this story, so next week I'll share some of the do's and don'ts that many of our clients have employed to get themselves in front of a larger number of advertisers, bring better advertisers on board, and work cooperatively -- not competitively -- with other networks that were facing many of the same problems as they were.

Have a question about screen placement or ad performance? Leave a comment and let's discuss it!