As one of just a handful of people who can claim to have worked in the digital signage industry since 1991, I suppose I could be called 'old school.' In fact, the term 'digital signage' didn't even exist when I helped build and program the Blockbuster TV network in their 900 locations at the time. But as the store count grew (at a rate of 1.5 openings per day back then), it became face-slappingly obvious how powerful a medium this new thing was. Fast-forward 18 years, though, and while there has been plenty of progress in our industry, there are still far too many companies attempting to launch networks blindly -- when they should instead be drawing on the huge body of experience that we now have at our disposal. One of my biggest gripes comes while I'm wearing my creative agency hat, since I continue to see network owners skip some vital steps of the content creation process. This leads to bad results and in turn, a negative view of our industry.

I have witnessed so many networks, particularly the in-store variety, skip any discussion of a content strategy. It's one of those things that gets mentioned often at seminars, but is rarely explained in detail. Consequently, few networks really understand the process of building an effective content strategy. Granted it can be a somewhat complicated process, but the experience pays a huge dividend. It basically starts with getting a clear understanding of the network's objectives, their integrated marketing communications plans, and the physical limits of the network itself (audio or video driven, passive or interactive, where it is merchandised, dwell time, etc). 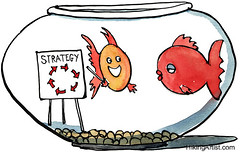 Image credit: HikingArtist.com
The early phase of a content strategy session feels a lot like reverse-brainstorming. This is the time to toss out questions rather than ideas, and as in a creative brainstorming session where there are no "bad ideas," at this stage of the content strategy no question is out of bounds. It's the time to figure out where there might still be lingering doubts or uncertainties about the content program, and begin shaping the content to match the client's marketing plans.

A second area in the content process that is often overlooked is the creative development stage. I have recently been part of two RFPs/Creative Briefs (reluctantly) where the parties believed the next step after delivering the RFP or Creative Brief was the execution, i.e. a finished video or animation, ready for in-store viewing. However, skipping the creative development stage (including the presentation of concepts, storyboarding, developing treatments, writing outlines, creating animatics, and so on) is akin to making a movie without a script. Heck, even reality shows have scripts these days, so it always amazes me when clients want to skip this all-important series of steps. There is a saying in the film business that a bad movie can be produced from a good script, but a good movie can never be made from a bad one. Now imagine the movie made with no script and you have an idea of where we are going by sidestepping the creative development phase.

I understand that all clients want their projects to come in ahead of schedule and under budget, but I doubt any of them would agree to those terms if it meant that the final product was poorly thought-out and executed. What would be the point of that? Yet many still seem surprised when creative agencies bill for their hours during the development stage -- even though this step can take as much time and effort as final production. Moreover, spending enough time at this stage will likely save the client money in the long run by bringing down production and execution costs, yielding content that performs better, and preventing the need to reinvent the wheel when everyone is wondering why the network is not performing as promised.

There are a lot of tangential benefits of these creative pitches too. In my experience, it has led to better creative that's functional, but more in keeping with the client's own desires than something we might put together without the development process. It involves the client on a deeper level, as sometimes they are not quite sure what they really want in their network at the brief or RFP stage. Consider someone who buys a plot of land and wants to put a house on it. It certainly is easier to visualize the house after it's built, but by that time it's too late to make major changes. That's why houses aren't built without architectural drawings and blueprints. Likewise, it's much easier to satisfy the client if they've had a chance to make their suggestions and voice their concerns before the production phase. Not every idea needs to be storyboarded and presented, especially as the network grows and matures. But in the early stages of a digital signage network's deployment, or when the client decides that the overall content strategy must change, it is indeed vital.

Don't Forget to Roll with the Punches

Our content strategy at Blockbuster did change over the years, so it's important for agencies to constantly review their strategies with their clients. For instance, when Blockbuster's business model moved to a revenue-sharing deal with the studios (vs. outright purchase of the movies), our content strategy changed too, since our higher-margin products turned out to be the paid-for and dust-collecting catalog titles. This in turn led to different creative. That all changed again when Blockbuster started selling advertising and developing more marketing partnerships. By 1996, so many internal departments were involved in the input process that the network was seen as a critically important, enterprise-wide program, used by marketing, buying, training, corporate communications, and even HR.

So in this time of 'hope and change', I hope that we can move forward as an industry, and that more of us will stress the importance of a sound (yet flexible) content strategy and creative process. As I noted at the beginning, I came into the in-store TV world backwards, with no true strategy and no creative plan. But that changed quickly after I took a few trips to Blockbuster stores around the country, and was finally able to visualize how our in-store program would interact with the environment. Starting with that seed of understanding, we then developed a content strategy based on Blockbuster's business model and marketing initiatives. Each concept that we deemed appropriate got a full treatment and outlines with the goal of maximizing its presence in the store. By the time we started conducting research on the program's effects, we were pleased to find that it was responsible for increasing rentals and sales by 8% (which was the main objective identified in our Content Strategy). Within a few years, we were able to fine-tune our content strategy and creative process to yield a program that would boost that number to more than 15% on average.

Want to learn more about Gary's techniques for creating in-store media programs that really work? Be sure to catch his talk on the "Basics in Content Strategy, Process and Design for Out-of-Home Networks" at the Digital Signage Expo in Las Vegas. His presentation is scheduled for February 26 at 3 pm.

+1 # Neal Geiger 2009-02-12 23:06
Thank you for the informative article on digital signage. I have only recently installed a low end system into one of our corporate stores and found very little strategy to guide my creative. A Sport Clips environment is unique because of the captive audience we hold while a client gets a haircut. Eventually, I combined several sources into a simple strategy mixing sales, entertainment and education as simple sides pass across the screen. So far this is working great but I am always seeking new information to get the most from the technology. Neal Geiger Creative Director Sport Clips Marketing
+1 # Tom Kelly 2009-02-14 12:35
Indeed a good idea, a strong message strategy addressing to refined target audience that to in captive environment can work wonders. Tom, wwwdotindovancedotcom
0 # Michael Torano 2009-02-20 03:34
Fantastic information; interaction with the environment and the audience while creating clear objectives for the network are pillars in any network strategy. These fundamentals are the foundation for content, creative, installation, deployment, hardware/software, connectivity, audio/visual (I could go on and on). you've touched some critical points here with relevant history and enviable experience. Many networks (particularly ad-driven networks) struggling to stay alive have yet to answer the simple question of "why am I here?", much less "what should I look like?" Michael Torano http://www.linkedin.com/in/michaeltorano
0 # Bill Gerba 2009-03-02 22:10
Neil, Tom, and Michael: Thanks for the feedback. Neal, per your comment, while the context of the venue is important, the number of installations really isn't. Except, of course, that you might be able to spend more money on a clip that's going to run across 100 screens than you could for 1. But even the amount of money spent on your clip is no guarantee that it's going to perform well. That's why an overall content strategy is SO important.
0 # Morty Manno 2010-04-29 19:59
I currently provide content for digital signage. I have a client and close friend who wants to place digital signage on his city buses and wants to give me the contract. Where do I get started? I have to overcome a quick learning curve.
0 # business signs 2010-05-04 17:20
You're so right. Many businesses are narrow-sighted, shooting straight for the final result. In my experience, once you're given the chance to explain that a good development plan will benefit them in the long run, they will usually slow down.
Refresh comments list
RSS feed for comments to this post
JComments