Would Consolidation in the DOOH Industry Drive More Business?

Tweet
Last week's article on Digital Signage Mergers, Acquisitions and Bankruptcies generated a lot of commentary, some of which either corrected or clarified the observations I made in the post. Richard Lebovitz from Digital Signage Expo also yielded further insights on the quantity and quality of business in the industry, as he passed along this quarter's DSE Business Barometer report. Our analysis last week, the subsequent reader commentary, and DSE's quarterly report agree on some things, but show stark differences in opinion when it comes to others.

In defense of "Bankrupt"

After publishing last week's article I took some flak for simply writing that a company "goes bankrupt" or "went bankrupt", instead of explaining the type of bankruptcy, primary cause, and current status of each company in that category. For example, as Matthias at 42 Media noted in a comment, they're still conducting business. So is Muzak, as Digital Signage Universe's Lionel Tepper noted. But the number of companies "going bankrupt" is an important thing to track, regardless of whether that means liquidating assets or filing for creditor protection. That's because -- aside from a tiny minority of cases where it's actually a valid strategic option -- bankruptcy is more or less an action of last resort. So while one company going bankrupt in a small industry might indicate troubles inside the company, lots of companies taking similar action points to serious health issues with the industry as a whole. And again, as a number of commenters pointed out, my list was extremely non-exhaustive. There were easily another 100 or more small network failures in the past 18 months that were too small for me to uncover. 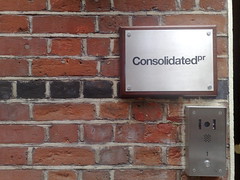 Image credit: whatleydude
Once again, "going bankrupt" does not necessarily mean "going out of business forever." But it almost certainly does mean "taking evasive maneuvers because of extreme financial hardship," and that's what I was most interested in looking at.

In search of a forecast

I've complained about the fragmentation of the market a number of times in the past, and while the 40-odd deals noted in last week's post go a little way toward addressing the problem, it's nowhere near solved yet. Interestingly, the issue of industry consolidation was a common one in this quarter's DSE Business Barometer too, with one respondent astutely observing that "there is a lot of confusion and misrepresentation in the marketplace created by various rep agreements and aggregators. As a result, there is early evidence of mistrust in this vertical." Likewise, consolidation was cited as one of the ongoing industry "growing pains" keeping us from getting out of our own way. But on the balance, the people who responded to the latest DSE survey seem optimistic about the future, with the vast majority indicating that revenue levels and ad spend levels would remain the same or increase next quarter. Granted, respondents to this survey made similarly rosy guesses in the past four quarterly surveys as well. But if the data is to be believed, many companies are experiencing sales growth.

Whether that growth will continue through 2010 is anyone's guess. But it seems that short of another financial apocalypse, the industry should at the very least resume the 7-10% growth rate forecast by many analysts in 2008. To the best of my estimates (and in the face of more optimistic projections I made early last year), 2009 probably saw about 0% growth. Aggressive purchasing by small- and mid-size networks offset losses due to attrition and closure, but couldn't make up for the number of large (500+) venue installations that simply stalled out. Since there's little sign of slowdown on the low-end, if even a few of these larger networks resume their projects (in conjunction with the already-healthy number of large projects being floated right now), 2010 should mark a return to "normalcy." (And I use that word very loosely when describing our industry.)

Whether consolidation would actually help create new digital signage/DOOH business is another matter of debate. It seems unlikely that employees of a failed software venture would go on to start a network that might purchase technology from other, more successful companies. However, the consolidation (through merger) and dissemination (through dissolution or layoffs) of industry "experts" is surely going to drive new projects. These people will take their knowledge of digital signage business opportunities with them to future jobs and companies, and some percentage of them will successfully plant the seeds of future networks, whether they know it or not. On the flip side, as natural market segmentation and growth via organic and transactional means continues, expertise will "clump" in certain companies and segments -- which should be a competitive advantage that lets the "haves" further distance themselves from the "have-nots." And all the while, the march of progress will tirelessly continue, lowering the cost of technology and bringing more tech-friendly millenials into the job market.

Cobbling together the industry

I'm on the fence as to how far this industry can go without some kind of major, transformative event. Ten years ago, I would have expected to see a mature, multi-billion-dollar behemoth toiling along like a well-oiled machine by now. What we have instead reminds me of that 1980s board game Mousetrap, where you have to Rube-Goldberg together a contraption that barely gets the job done, only to learn that your little sibling ate some of the plastic parts, and you can't find all the marbles.

That's us. We've lost our marbles.

While knocking on wood, I'll say it: our industry appear to be out of the danger zone. But I'll be carefully tracking the ongoing M&A in our space to try and objectively measure and monitor our health (and I know I won't be the only one doing so). We're still one big game-changer away from becoming the mature and respected industry that we should have been. Who's going to make it happen? Will it be one of the Fortune 500s who have stumbled into our space? One of the old stalwart tech or network companies? Or will it be a startup who sees the connections that everyone else overlooked, and can't understand how we've missed the forest for the trees this whole time? Leave a comment and let me know what you think.