Why Do So Many Digital Signage Projects Fail? A Fresh Look

Which things made a difference last time?

In short, after reviewing thousands of leads and asking those companies what became of their projects (regardless of whether we wound up working with the folks or not), we found that there were really only 5 major areas separating those companies that succeeded from those who did not. They were:

In 2007 we said, "the big winners in our data set either had a very unique spin on a particular revenue model, or virtually flawless execution on a "standard" model. While I wish I could say we're at the point where we can hear an idea and give you a thumbs up or thumbs down based on how good it "sounds," just having a solid model isn't good enough." A 2012 review affirms that having a solid business model, preferably complete with written plan, is still essential. This is probably because, as we've seen, the typical DOOH network needs to plan for and fund a certain amount of front-loaded scale in order to tip the break-even equation in its favor. 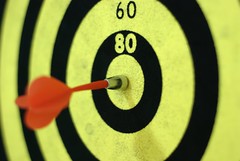 Image credit: Eran Sandler on Flickr
As noted in 2007, I'm still not really satisfied with the phrase "understand your goals," since what we're trying to capture from the data here includes media consumption measurement, sales goals, growth goals, follow-on funding goals, and a whole host of other measurement-related things that, while inexorably tied to one another, require complex, interdisciplinary teamwork, careful planning, and fastidious, ongoing oversight. Suffice it to say that companies that don't set meaningful goals at every step of their growth seem to have a very hard time accomplishing anything, regardless of whether they're a three man startup installing a 20 screen pilot, or a Fortune 500 company working on a much larger project.

Back in 2007, we began by saying that, "if this list were in order of importance, this item would almost certainly be #1". Interestingly, the digital signage ecosystem has evolved quite a bit in the past 5 years, to the point where this might not be the case anymore. Indeed, there are true, bona fide experts available to handle so much of your project now -- from content strategy to finance to network management -- that it might actually make more sense to keep your core group small and outsource everything else. However, there are still a fair number of companies who seem to ignore their core competencies and try to do all the wrong things in-house. As we observed in 2007:

We've had IT firms that want to sell ads. Agencies that want to install networks. Content production studios that want to do infrastructure management. And all the while they think that they can handle it all, and partnering/outsourcing is for wimps. At least, that's what I'd have to guess when looking at (a) the number of companies that were handling at least one part of a project that was clearly outside of their operational expertise, and (b) the percentage of those companies that never got a project off the ground or failed within nine months.

Back in early 2007, we noticed that more of our conversations actually began to feature customers/prospects/interested parties, "articulating (to some extent) what they thought their problems were likely to be, and how to mitigate them. It could be that we simply didn't take such good notes prior to that point, but my wholly-unscientific feeling is that enough people "got it" now to avoid common planning, budgeting and deployment problems." In 2012, I'm less sure, and I'll say this again when we talk about #5 below. I expect this is partly because things that appear obvious to those of us who have spent far too much time in the digital signage industry are in fact not apparent to those new to the industry, and partly because some people never learn.

5. Learn from past mistakes

In 2007, we were pleased and surprised to find that folks in the industry had started talking to each other, and it became fashionable to cite industry references when talking about why they will succeed when others have failed. And for a while, I was optimistic that the mistakes of the past might not be repeated quite so frequently. Unfortunately, with another 5 years of perspective, I no longer think this is the case. In fact, if you just take a look at our M&A lists for 2008-2010 and 2011, it's clear that there are quite a few failed or mediocre exits to go along with the more successful ones. And while that in and of itself isn't surprising (many more companies fail than succeed in a typical industry), when you take a look at the reasons for many of these failures, you'll see that indeed the management teams frequently repeated the same old mistakes of the past.

All that said, there are clearly plenty of other reasons why a network or project might succeed or fail. A key stakeholder might leave. Motivations and goals might change mid-way through the project. Prosperous networks might even be overtaken by upstart competitors promising better deals. But while understanding the above list isn't enough to guarantee you'll succeed, it is definitely necessary if you want to avoid failure.

Have digital signage companies gotten more savvy during the last 5 years, or are we all still spinning our wheels? Leave a comment and let us know.

+1 # Gary Halpin 2012-05-03 19:57
I really love #3, as that was a huge pet peeve of mine for years. It has slowed down, but I still see technology companies trying to push their magical boxes into every environment, when in fact, each network is unique and the technology should be the last thing to be decided when launching a network. I'd like to add that in addition to having a solid business model (and understanding the goals, i.e. objectives), you must also be extremely flexible and be able to change and adapt these. We certainly have with our latest network, and if we didn't change (based on market responses), we wouldn't be still running and growing it. And not sure if I should say we are proud to have learned from past mistakes, but we certainly have. Mistakes aren't taught in business school, but they are a fact of life (not just in the DS world), so better know how to learn from them. Thanks Bill!
0 # Bill Gerba 2012-05-09 17:29
Hi Gary, Since your only two options are make mistakes and learn from them or make mistakes and don't learn from them (since honestly, who doesn't make mistakes?) it's far better to be in the former group than the latter :)
0 # John Morgan 2012-05-10 00:45
The #1 reason I've seen digital signage projects fail is a lack of content strategy and updating. Companies find the concept of digital signage "cool" but then fail to plan for the sheer amount of content that has to be developed or re-purposed on a regular basis. The job of creating content falls to a mid-level employee who's real job is something else. Then the digital signage system falls to #74 on their list of priorities. After a while, people stop looking at the screens because they no longer contain relevant content. That's why we started RevelTV, the world's first full-service digital signage agency. We handle all of the back-end graphic design and scheduling services for our clients so they can focus on messaging strategy.
0 # Bill Gerba 2012-06-04 18:10
Hi John, You know, I'm a bit ashamed to realize there are no content-related items in this list. Clearly poor content has hurt (and possibly even killed) NUMEROUS networks, whether ad funded or not. Of course, there are SO MANY potential content-related problems that they probably deserve a whole list just to themselves :)
0 # Jeff Black 2012-08-21 18:01
I also agree with #3. There are so many companies that think they can just jump in to the game and take care of things professionally. They don't understand how complex it is.
0 # Josh Smith 2014-03-21 16:23
Seriously, I am very impress with this information and agree with your opinion. I will share this post with another.
Refresh comments list
RSS feed for comments to this post
JComments