Tweet
Hang screens. Connect screens to Internet. Sell screen time to interested parties. It all sounds so easy, right? Yet while we've all heard a thousand variations on this theme, time and the free market have rendered 99% of them dead and gone. Now if we were in a normal industry, that kind of failure rate might make us step back and re-examine the overall feasibility of the screen time model. But instead, it seems as if the number of people trying out new (and often wacky) sales and business models has been accelerating, fueled by the remnants of failed digital signage companies. From time to time, I think I'm getting caught up in the movement too. Whereas at one point I'd pick out many of these freakishly outlandish sales pitches and dismiss them out-of-hand, these days I find myself thinking "Gee, I haven't heard that one before. Maybe that means it could work..."

I'm not so far gone as to immediately think of those off-the-wall ideas as surefire hits. After all, the digital signage game -- fundamentally at least -- isn't different than any other line of business. Thus, we should expect all of the standard business rules to apply. So, for example, we can expect that less than half of new businesses will last five years. (30 years of US Census data tells us that story with pretty good accuracy.) Of the remaining half, a good number will be liquidated (which doesn't technically count as failure according to the government), and still others will shift directions entirely without closing down the business. (For example, changing from a digital signage company to a bed and breakfast.... Don't laugh. You know it has happened.) 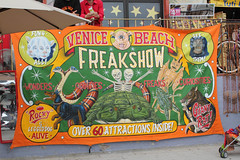 Image credit: Joe Abbruscato
But in addition to all the typical new business caveats, I definitely get the feeling that there's another layer of trouble heaped on top of DOOH firms. For example, lots of companies that try some variant of the screen time model literally can't prove their worth. With no solid ROI numbers to stand on and still no accepted means of measurement, everyone looks at them skeptically. Additionally, many companies think that just because it's easy to scale the technology, it will be equally straightforward to scale their business -- something they'll need to master in order to achieve profitability. Meanwhile, back in the real world, front-loaded costs, perpetually changing financing options and spotty deal flow combine with logistical issues, install-time difficulties and other mundane but important challenges to make scaling organically harder than almost everyone realizes.

An anonymous commenter left an incredible comment describing the rise and fall of Reactrix on a recent blog article about how to sell your digital signage company. Reactrix had a very different model, different technology, different... well, pretty much everything. In addition to building out their own technology platform, developing their own physical infrastructure for each venue and designing brand-new, totally custom content for each advertiser wanting to try the system, they also had to convince prospects of the feasibility and desirability of all that new stuff.

Many less ambitious DOOH companies have run into trouble, too. In fact, "I'll put your ad on this screen if you pay me X" is such a tough sell for so many that we've seen and heard about hundreds of variant models that try to make it easier to pry the money out of prospective advertisers' tight grips. Some have involved co-marketing funds. Others relied on government programs to make the purchase a tax write-off (or close to it). And still others used barter arrangements, in-kind transactions and other non-cash incentives to make screen time buys seem as manageable as possible to potential buyers.

There are a couple of problems with these techniques, though. First, there's no guarantee they're going to work. The difficulty of explaining your compensation model might be enough to drive prospective buyers away before they have a chance to make an informed decision. Or, your model might be so far outside of what the client is used to doing from a business and accounting point of view that they'd just as soon not be bothered. This is especially true for networks that plan on securing national or regional advertising through media planning agencies. And second, unless you're already very familiar with the ins and outs of your model, there's a very good chance that your too-good-to-be-true, guaranteed sales generating business approach will promise too much, ultimately not leaving you enough to actually run your business on.

Using the unusual to your advantage

In order to close digital signage deals, it's important to be creative -- and essential to be flexible. A while back, I might have discouraged new networks from starting out with nonstandard business terms. But these days, I honestly believe that the oddball deals are doing more good than harm, gaining wins and concessions that probably would not have happened under traditional terms. One thing that worries me, though, is that I still haven't seen a surefire execution strategy. We've seen multiple incarnations of even the strangest business models, and just like anything else, sometimes they succeed and sometimes they fail. I suppose that can be chalked up to all the usual business execution challenges and market forces. But it'd sure be nice to know that there was some plan -- when properly executed -- that produced consistent results.

Have you heard about any bizarre sales strategies? Can these unusual approaches succeed in the long run? Leave a comment below and let us know what you think.

0 # Ed Personius 2010-07-21 05:04
Bill, Another way of stating your comments on some companies' advertising strategies, might be that While they may be Digital Signage companies, they are nonetheless NOT advertising companies. Advertising is a tougher business than many realize, and the advertising industry itself is in a fearful, reluctant and skeptical mood. That's why it's hard to get people to spend X to be on your screens. For our part, we have tried some slightly different approaches (bizarre, you may say,) that seem to be of interest to people, yet we are by no means a "hit". But we do feel more confident of proving ROI. As Direct Response advertisers, we have made it a practice of creating trackable, more provable profit results. We think this is the key to selling and keeping advertisers.
0 # digital signage software 2010-09-27 18:36
Great article. Gives a very useful insight.
Refresh comments list
RSS feed for comments to this post
JComments