Tweet
Happy New Year, all. Though the holiday season may have come to an end, the digital signage prognostication season is in full swing right now, with predictions for the coming year and top 10 lists dominating our news outlets and blogs. I decided to get out of the prediction business a number of years ago, since apart from not wanting to give away my business plans, I'm just no good at guessing what the future holds. Thankfully (or not), there are plenty of other people out there who are more than happy to fill endless web pages with lists of all the new, game-changing, paradigm-shifting events that they expect to see in the coming months. To my eye, some of these predictions look really good. But some... don't. Let's investigate three of these supposed digital signage trends in more detail. 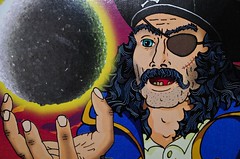 Image credit: Valerie Everett
Gary Kayye is a highly-respected AV industry guru, and a genuine, honest, straight-shooter to boot. While he only touches on digital signage stuff occasionally, I tend to agree with most of his assessments as they relate to the AV industry. So I was pretty surprised to see that one of his predicted game-changers was none other than NEC's VUKUNET, which is essentially a network aggregation service in the vein of SeeSaw Networks. To somebody unfamiliar with SeeSaw, Adcentricity, BookingDOOH, rVue, or any of the myriad other booking and aggregation services out there, something like VUKUNET might sound pretty interesting. But considering that aggregators with bona fide media people running them and dedicated exclusively to ad sales on DOOH networks are struggling, I can't possibly fathom how an electronics company that caters to IT and AV groups can make such a service work. Even more so if NEC really plans to target AV dealers. Remember, if you've never sold ads before, there's a very high likelihood that your ad-funded network will fail. I'm talking about a 96% failure rate, based on a sample size of over 600 companies. That's a pretty clear trend, if you ask me. I know a lot of AV folks haven't heard this statistic, and might not want to believe it even if they have. But it's the sad truth, and will probably be the thing that prevents VUKUNET from achieving any serious penetration into the ad market -- perhaps even killing it before the end of 2010. I certainly have no vested interest in this being the case -- we sell through the AV channel, and if VUKUNET was successful it'd probably help our sales. But unless the folks at NEC have some serious tricks up their sleeve when it comes to ad sales, they face a significant uphill struggle with their new service.

I disagree with a couple of the predictions made by industry veteran Keith Kelsen. But rather than pick apart his whole list (or focus on something too easy like the notion of 2010 as a "tipping point" year), I want to call attention to Keith's very first prediction -- that content strategies and discussions will "dominate the launch of new networks and the re-thinking of older networks." Oh, how I wish that would be true. There's no excuse for the poor content still running on so many networks today -- especially when there are so many digital signage content resources and repositories available. However, despite great conceptual gains, poor economic conditions have limited the adoption of new (and frequently labor-intensive) best practices this past year. While many people predict that 2010 will be better, the proof is in the proverbial pudding. Consequently, the focus this year will be the same as it has been in past years -- making money any way possible. Advertising networks will continue to sign up with multiple ad sales services (despite Ken Goldberg's excellent analysis of why that might be a bad idea), experimenting with different formats that allow them to sell inventory that advertisers might actually be willing to buy. Meanwhile, the vast majority of non-advertising-oriented display networks -- whether they be for corporate communications, trade promotion or other kinds of general messaging -- are run by people or groups that have many responsibilities, not just managing their digital signs. While that's certainly fine, these people are pressed for time and tend to be budget conscious, and most of them won't have the time or money to get trained or outsource production to digital signage experts. Consequently, I expect 2010 to be another year of slow, gradual evolution, not revolution, towards better content on digital signs.

Matt Schmitt has just started posting Reflect Systems' top 10 predictions for 2010, but I'm already afraid that they're going to be far too optimistic about business conditions and the general state of readiness of retailers, brands and agencies. Will these groups pay more attention to digital signage than they have in past years? Yes, I think they pretty much have to. But that's mostly because they paid very little attention in the past -- so they can only improve! Now, many people who know me will readily call me a pessimist (I think I'm a realist, but I also know that's the classic pessimist's defense). But if you take a broad view of the business climate -- not just our little niche, but everybody that feeds into us -- there just isn't a lot of justification for the kind of massive spending that would make us top-of-mind for agencies, retailers and brands. Our part of the media mix is still too small to be interesting to most agencies, buyers and planners. It will take more than a year to change this. So once again, I expect a gradual evolution of their acceptance and understanding of us.

If you've made it through this article and all the pages it links to, and you still want to read more predictions, I highly recommend the list that Barnaby Page put together at SCREENS.tv. His points are concise, demonstrate a strong understanding of the global market, and, in my opinion, reflect reality. Of course, the folks I mentioned today aren't the only smart people in the industry, so I'd love to hear what our readers think.

Do you have any predictions about what we'll see in the digital signage market during 2010? Leave a comment and let us know.

+1 # Rik Willard 2010-01-08 00:10
The predictions are dubious only when applied to DS in the most strict sense. There will be See Saw competition and that will become attractive to DS networks as revenues must diversify and grow to keep our sector vibrant. DS will be measured largely through on-premise, mobile and value-added home engagement. Hence, content will be extremely important. You can read more at rule7mediallc.wordpress.com.
+1 # manolo almagro 2010-01-08 07:18
bill- as usual, your insights are "spot on" especially the dubious predictions of 2 and 3. In both cases, each prediction is a little too self-serving. As for you being a pessimist vs. realist? well - I've always know you to be more of a curmudgeon. (joke) :)
+1 # Pat Hellberg 2010-01-08 18:40
Bill Congrats on another great article. It is a curious phenomenon that, simply based on the arbitrary progression of the calendar, we get sucked into believing "game-changing, paradigm-shifting events" are just around the digital signage corner. It's a new year! Things are gonna change! Why? Cause I just read that things are gonna change in several "top ten/predictions" blog posts and they can't all be wrong, can they? Put me in your "pessimist/realist" camp since I don't believe that market conditions are dramatically different in early January as compared to late December. Thus, the predictions and lists seem artificial and forced. Nonetheless, here are my predictions for '10...the same predictions I made in '09, '08, '07 and so on. You get the picture. I don't think the basic fundamentals for audience/consumer engagement have changed. And they probably won't change in the forseeable future. 1. Digital signage network operators will be able to buy reach. But they won't be able to buy engagement. If they don't fill their displays & monitors (and their customers' mobile devices) with compelling content, the number of aggregated eyeballs won't mean a thing. 2. Technology decisions can't be made in isolation. If they are, they will be doomed to fail. (This is a straight lift from some very smart person's blog. Maybe it was yours, Bill.) We've all witnessed cutting-edge tech that falls flat because it fails to deliver value to the audience. Unless it is relevant to the audience, tech for tech's sake will be worthless. 3. Without a clear-cut mission, goal, raison d' etre, a digital signage network will not succeed. Long before the switch is flipped, there must be established criteria to measure the network's degree of success. Without that criteria, you and your network are toast. Again, great article, Bill. All the best to everyone in 2010.
0 # darin 2010-01-14 16:44
What are your thoughts on the affect of 3D displays (non glasses) and 2D to 3D converters on the DS market?
0 # Bill Gerba 2010-01-20 15:30
Pat: I think #2 is just going to happen forever. Will there be more deployments that feature inter-departmental cooperation? Sure. But at many shops, IT folks will continue to control "their" projects in a bubble forever. I'd also love to see your #1 come true, but supply isn't the problem here, demand is, imo. #3 is certainly spot-on. Darin: I don't think anything with glasses is going to significantly impact the digital signage market for sure, and so far I haven't seen any compelling and useful (and affordable) 3d digital displays that would work *without* them. The glasses-less displays I've seen all suffer from significant problems like poor brightness and contrast and limited viewing angles. If the vendors can work out these problems while lowering the price to maybe 25-30% more than a conventional screen, I'm sure we'll see significant adoption by the industry. Otherwise, probably not.
Refresh comments list
RSS feed for comments to this post
JComments