Tweet
Many people seem to think that if they simply stick a digital sign somewhere in a store, it will get noticed. While not as common as "Build it and they will come" syndrome (major symptoms: spending $$$ to deploy a digital sign network only to discover that your complete lack of ad sales experience has doomed you to an early death and substantial debt) the "It's digital, of course they'll see it" complex can be equally fatal to a digital signage project. As I mentioned in a recent post, I've seen screens placed behind giant concrete pillars, hung from ceilings in dark, un-trafficked corners, and even positioned to face bright, exterior windows (no, they weren't super-bright outdoor LCDs, either). While our previous article on angle, height and text size offers a few tips about optimal placement in terms of visibility, today we're going to talk about the types of messages that are most effective at different locations in a retail environment. And to do so, I'd like to highlight a few tips from the experts at TNS Sorensen.

While researching screen placement, I came across a presentation by TNS Sorensen (PDF format) that explains some of the peculiar things that go on inside the typical retail environment. (The presentation is a few years old but still quite relevant.) For instance, did you know that in a typical supermarket, the right side slightly outsells the left side simply because people tend to come in, turn to the right, and then make a counter-clockwise circle (hence the right side always get shopped, while the left side might get short-circuited)? For that matter, did you know that counter-clockwise shoppers on average spend about $2 more than clockwise shoppers? While such minutiae might seem irrelevant to your digital signage plans, they're actually quite important. For example, while we've all seen instances of screens evenly distributed around the racetrack, this is arguably not the best approach. Perhaps putting more screens on the right side -- where we know the audience will be larger and fresher -- will be favorable. Or maybe better utilization on the left side, where the average shopper will be approaching the end of her trip, might help encourage a few last-minute purchases. While I can't predict which approach would perform better in any given retail situation, I do know that evenly distributing the screens in the name of aesthetics or feng shui or whatever is probably not optimal.

Tips for Staying Relevant to Your Retail Audience 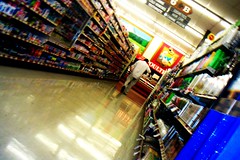 Image credit: Drew Herron
The whole key to digital signage is relevance. Our job is to put the right information in front of the right person (or people) at the right place and time. It's no small feat, to be sure, but when done properly digital signage offers a messaging platform that few other media can match. However, even if you've developed content that gets you 90% of the way to connecting with your core audience, here are a few tips that can help to put you over the top: The Right Message at the Right Place and Time

Even your content will come across differently depending on where it's played back in the store. And while that goes for obvious things like showing contextually relevant content (think cold medicine spots and health bulletins in the pharmacy section), it's also true for more subtle variations based on shopper habits. For example, Sorensen found that the beginning of a shopping trip tends to favor newer and less familiar items. While I haven't tested it out myself, that might also mean that advertisements for newer products might perform better closer to the entrance, rather than near the checkout aisle, for example. Likewise, front-facing end caps will favor recognized brands (where shoppers can make a quick selection, and don't need to spend much time thinking about it). Thus, the content on those endcap screens should focus on quick blasts of features and benefits, instead of comparisons with other brands or products. The reverse is true for rear-facing endcaps: these, Sorensen found, are more suitable for less familiar brands, probably because shoppers tend to move a bit slower in the back of the store, and can thus take some extra time to consider these new products.

It's unfortunate that even great research by the likes of TNS Sorensen and others needs to carry a caveat that your mileage may vary. No two stores are alike, and no two shoppers are alike. That makes coming up with any kind of generalizations like the ones above very, very hard. Moreover, once researchers do come up with some broad and useful guidelines, the practicality of acting on them has to be weighed against how "typical" your venue and your shoppers are. Get too far away from the average, and suddenly the guidelines might not work out for you. They could even make things worse. But if the tips above teach us one thing, it's that people do think and act differently in different parts of a store, and during different phases of their shopping trips. While the one-size-fits-all content approach employed by many retail TV networks is certainly economical, research like this increasingly suggests that it's far from the best thing to do with your screens.

Have you used shopper behavior data to decide where to place your screens, e.g. putting more screens on the right side of the store instead of the left? Did you get any pushback from venue owners or advertisers who wanted everything to be equally spaced?

0 # Emerald 2009-04-28 18:14
This goes back to the notion of efficiency. Content is getting thrown all over the place inefficiently because networks are so fragmented. The right message at the right time in front of the right person means having a solution that targets audiences more efficiently across mutiple platforms. What the industry needs is a network unifier, an advanced technology aggregator, a company that ca take mutiple digital networks with unique distribution capabilities, and harmonize them like a symphony. This way, advertisers can distribute their content across multiple platforms without having to worry about changing their ads over a hundred times to fit network specifications. As soon as this problem is solved, advertisers will start pounding down the door because they will be able to plan and buy media more efficiently.
0 # Bill Gerba 2009-04-29 17:47
Hi Emerald, I don't buy that argument 100%. A lot of networks, particularly smaller ones in the 10-99 range, are run by small companies that for better or worse aren't doing anything else -- they're focusing all of their efforts on that network. So they have nothing to be "fragmented" by, and what's more, they often do the content creation to actually build the spots that are going to play on their screens. So while ad aggregation and combined distribution is certainly a useful goal, I don't think it's the reason behind so much of the mediocrity out there with regard to screen placement and content set up.
0 # Ediz Burla 2009-04-30 21:40
Hi Bill, I hope life is treating you well. No doubt screen placement plays an important rolel to enhance effectiveness. I agree that shoppers tend to move slower even to stand and consider at some points. Figuring out such areas is the key point of a successfull implementation. Most retailers expect the screens equally distributed, in most cases I found it unreasonable. I've experiences mainly in Electronic retailer shops such as Teknosa (largest retailer in Turkey-over 200 shops,) Mediamarkt...etc. The entrance level of the store may not be a good hit. Depending on the shape of the store, screens which are placed in the middle of the store at the right angle seems more viewable. Shoppers tend to be aware of such screens frequently compare to to the side installations. In addition, depending on the size/shape of the store such placements give shoopers extra time to consider and to follow up the informative contents. Rgs. Ediz Burla
Refresh comments list
RSS feed for comments to this post
JComments