Tweet
As many others (myself included) have noted in the past, you can tell when someone is really busy by the frequency of their blog posts and social media updates. Last year I tried to buck that trend, forcing myself to produce about one blog post per week for the whole year regardless of how otherwise occupied I was. This year I seem to be unintentionally going in the opposite direction, but that's OK, since when I do find time to write, I've amassed a whole bunch of things to talk about. That said, here are three topics I wanted to revisit that should be of interest to those working in the digital signage industry or a related field.

On the subject of DOOH pricing, CPM, etc.

My last post was over a month ago, but it was an important one, discussing the results of our most recent survey on DOOH advertising pricing. After publishing that article, I got a number of calls and emails from operators of what I'd consider to be fairly large DOOH advertising networks. All of them wanted a more detailed analysis of the numbers, and an opinion on whether they were reliable. However, none of them contributed to the results by filling out the survey in the first place. All seemed a bit... irritated on the phone (it's harder to pick out that nuance in an email). One possible explanation might be that our data suggests that some DOOH advertisers are overpaying for their current placements, which could theoretically drive actual pricing done. But if that were the case, I'd be expecting more holiday cards from big brands thanking us for helping them lower their ad spend. 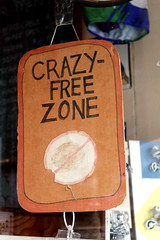 Image credit: Quinn Dombrowski on Flickr
Also, while the average (mean) price for DOOH ads sold on a CPM/Viewers basis fell 36% (from about $12 in 2011 to $7.65 in 2012), I don't think "the bottom has dropped out of the DOOH market" (partially because there wasn't much of a market to drop out of in the first place). However, I do think that many operators have lowered their expectations about what their screen time is worth, and I believe that this is actually driving growth in the industry by opening up the medium to a much larger body of potential advertisers. And the fact that both capital and operating costs for setting up and managing a DOOH network continue to fall doesn't hurt much, either.

Not one but two VC-backed startups called in recently to chat about their plans to launch the next world-dominating, advertising-funded digital signage project. Neither management team included any experienced ad sales people. One of them didn't even know what media buyers and planners were. But despite that, they both mentioned Coke, Pepsi, Apple and Nike as potential advertisers. Yikes. I've been saying this about once a year since around 2006, but not having ad sales experience is the #1 reason why DOOH advertising networks fail. Maybe it's time for yet another refresher article on the subject :)

Likewise, I had a build-vs-buy conversation with a pretty business-savvy group recently. Way back in 2010, I figured the market was mature and established enough to put this kind of inane discussion to bed, but I was wrong. And I see that Ken Goldberg was lucky enough to have a similar discussion (and blog about it) just recently. All I have to say is this: if you're thinking of writing your own software from scratch, you should probably pick a less saturated market.

In the digital signage world, the more things change, the more they stay the same. On the downside, that means that there are still loads of crazy people in our industry. But on the upside, it also means that costs continue to fall, and our approaches for identifying and moving past all of the crazy people remain relevant. And once we put the crazies aside, we find that the opportunities are bigger, more varied, and span a much larger swath of vertical markets than before.
JComments