Is it too late to still say Happy New Year? I've been on a blogging/social media hiatus since December, so it might be a faux pas, but I'll do it anyway. Fortunately, this first post of the new year for me should be a good one, as it's finally time to discuss the results of our most recent survey on DOOH ad pricing. I know these results proved quite popular last year, so hopefully this followup will garner the same response and thoughtful analysis. While we had fewer results to work with than last time (with just over 100 responses), I think the data still speaks to the top-line trends in the industry.

The 5 things you want to know

How about a pretty graph?

I'll have more charts for you in an upcoming article, but for now, here's a look at how the responses stacked up in terms of CPM/Viewers pricing: 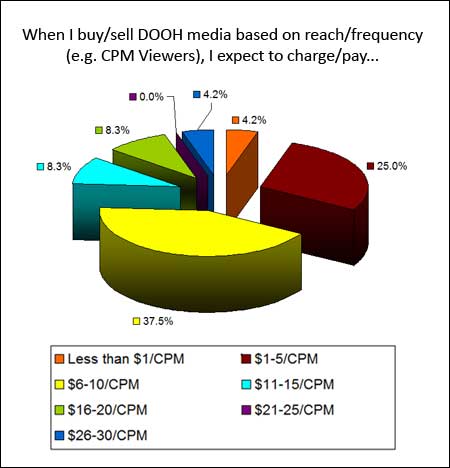 When writing up analyses for these kinds of surveys, I always include a section on caveats, and this time is no exception. For starters, while last year's survey produced over 175 responses, this year's only garnered 102, and many of those were incomplete (largely due to the inclusion of the a'la carte pricing question mentioned above). While that's still a pretty big number, with these kinds of surveys more responses do tend to produce better data.

Second, this blog skews pretty heavily towards hardware/software/service providers, integrators and the like. So almost 40% of the responses came from industry vendors, who may or may not have a clue about DOOH advertising pricing (though of course our screener questions ask about this). Fortunately, 26% of responses came from network operators, and those directly involved with ad purchases and sales accounted for another 24%, so I don't expect the numbers to be entirely off-base. (I'll try to provide a better breakdown of responses by job function in a future article.)

Finally, even though a reasonable number of respondents did identify themselves as media buyers/sellers, a quick perusal of their email addresses (for those who left them) produced a list of agencies and networks that I haven't heard much about, and several of the big names were noticeably absent. This could simply be because they chose to remain anonymous, but that wasn't the case with last year's results.

Despite these caveats, my initial analysis of the data and comparison with last year's results gives me enough confidence to at least present the top-line findings. I think there are some interesting results that will pop out of the questions about the media mix and who exactly is doing the buying and selling (and who wants to be) as well, but those will have to wait for another article.

A quick note about the DSE show

Like many of you, I'll be at DSE in Las Vegas next week, giving a talk on best practices for digital signage content creation. Feel free to drop me a line if you'd like to meet up.

Thank you very much for your posts which are always awesome. They actually allowed me to understand better the Digital Signage world and even start a French Blog myself.