Mobilizing the Base: Getting People to Ask About Digital Signage

Tweet
As an industry, we've gotten pretty good at explaining what digital signage is. We can talk about what it does, how it's used and who uses it in layman's terms. We're comfortable working with people from just about any type of business that you can think of. And we've created a large and generally pretty good ecosystem of conferences, trade shows and industry events to give each other support and welcome newcomers to our space. For all that, though, I don't think we do a very good job of educating people outside our industry. And if we want to grow in the coming years (especially in this lackluster economic environment), that has to change.

Digital signs are everywhere. As it turns out, that's a mixed blessing. On the one hand, it has been a long time (relatively speaking) since I've had trouble helping someone understand what we do. On the other hand, much of the "easy" expansion into just about every significant vertical market is done, which means that finding additional growth requires going deeper, developing new killer applications, and getting in touch with people who either haven't thought about digital signage for their business, or who don't understand the potential benefits of it yet. The former demands meaningful analyses of all the different markets and the development of end-to-end applications with clear ROI potential that can be easily explained to current market members. The latter requires the equivalent of mass-market B2B advertising -- something that isn't a slam dunk even for blue chip companies like IBM and Oracle. Either way, as an industry we're probably approaching an inflection point where the effort required to reach the audience of current non-users is significantly greater than what was required to reach them in the past.

The answer to a question that nobody asked 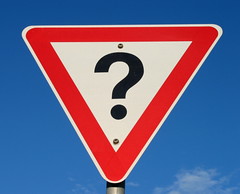 Image credit: Colin Kinner on Flickr
Digital signs are everywhere (see above). However, in many cases they're still practically invisible. We don't notice them at retail stores, we hardly make them out in crowded bars and clubs, and we ignore them in "captive" spaces like waiting rooms in favor of mobile devices and old-fashioned magazines. A lot of these problems could be solved with spectacular content, but let's be honest: even a team of world-class designers can't create spectacular content 100% of the time. And most of us don't have access to world-class designers in the first place. This makes pitching potential customers a challenge: virtually everyone has seen digital signs by now, but if they don't remember what the screens were doing, they clearly weren't engaged. And if they weren't engaged, what does that say about the ability of digital signs to memorably impart messages to viewers? And if you can't memorably impart new information, what's the point of using them in the first place? (Sure, there are some entertainment scenarios, but still...)

So in a very real sense, we could turn out to be victims of our own success, with the early mediocre installations taking mindshare and poisoning future deals with their average-ness. We saw this very thing happen with interactive kiosks in the early 2000s, and it was years before you could bring up a kiosk project to a CEO without him calling security to have you dragged out (or worse).

Crossing over into the mainstream

Is there a solution? Unfortunately, I don't think there's a single magic bullet that solves this problem. But for starters, when pitching a new client it's essential that you use only the best examples to showcase what the client might be able to do. I like to keep photos of top-shelf installations and short reels of the best content on hand and organized by the type of application. Are you thinking about a DOOH advertising network? Then check out these amazing, well-placed screens running this highly-focused advertising content. Doing an employee-facing safety or training network? Take a look at this tight, 2-minute loop of clips. Saying "well, you could do this or that is no longer sufficient. Strong arguments have to be made early and backed up with data, either hard (e.g. "this improved sales of our widget by 30%", or "on-floor accidents decreased 25%") or soft (the aforementioned pretty pictures of great installations and effective content).

As for "educating the base", I've seen a handful of magazine ads from big LCD screen vendors who are trying to push digital signage. But that's not going to cut it. More likely, educating the base will continue to be a grassroots effort, largely carried on by the thousands of pro AV and IT consultants who serve smaller clients. Without these feet on the street, I just can't think of any practical way to reach so many businesses and individuals in so many diverse markets (logistically and geographically). For the most part, these guys are opportunistic and will happily work on any digital signage project they happen to come across, but additional education and incentives would probably make them more effective industry missionaries. InfoComm (and to a lesser extent, CEDIA) have finally started making digital signage a more pronounced part of their focus, but more could certainly be done.

Maybe this is the new low hanging fruit...

Where will future growth come from? Creating brand-new networks or expanding on existing ones? And who will do the lion's share of buying? Big companies or mom-and-pops? Leave a comment and let us know!

0 # Gary Halpin 2011-10-22 18:24
Nice article Bill. We have come a very long way, and we should be somewhat proud of that. Remember 1997 when it just started to take off? I do feel at this point, that education is on a case-by-case basis, which is fine, because every network is so unique, I think it has to be, especially when it comes to retail/in-store networks. But it's not just the client who should be educated, it's the creatives and account execs at ad agencies. While the media department has been pitched frequently, bringing the idea to the creative side (along with account) is vital. They suddenly have something new, something out-of-the-box, something to add to the 360 to pitch their clients. It's worked for us.
0 # Bill Gerba 2011-10-27 13:50
I agree. I don't see any mass-market advertising campaigns for DOOH, though there'd be a certain irony to that :)
Refresh comments list
RSS feed for comments to this post
JComments