Tweet
Mike Smith, our VP of Sales, recently spent some time at a trade show for AV dealers and VARs. Thinking he might learn a thing or two about the channel, he attended a number of the vendor-sponsored panels and presentations. While he was well-prepared to sit through some thinly-veiled sales pitches -- as those panels all too often are -- he was definitely not expecting some of the patently incorrect claims and remarks that the presenters made. I'd like to take a minute to dissect the two most egregious ones, which pertain to the technology and business models that are used in kiosk and digital signage deployments.

The kiosk app myth: "A kiosk is the same as a digital sign"

This claim was made, not surprisingly, by someone who sells kiosks and kiosk equipment. And at a certain level, I can't blame him. Over two decades, the "K" word has become associated with boxy podiums running crash-prone software and kludgy user interfaces that frequently hinder rather than help the end user. I'm sure it's not a stretch to say there have been more botched kiosk projects than successful ones. And while that may be true for digital signage projects as well, there's enough positive spin associated with digital signage to stifle the typical worries about cost, complexity and ROI. Consequently, we find our little industry's ugly older sister trying to glom on to some of our... um... appeal. 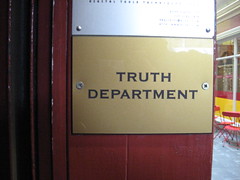 Image credit: Andrew King on Flickr
Granted, there are also plenty of similarities between digital signage systems and interactive kiosks. Much of the hardware and software is the same. The systems are placed into similar kinds of venues. And they're frequently used to achieve the same kind of objectives. Heck, years ago I myself was noting the beginning of a convergence between the two types of devices. But we're not there yet. There are still a few key differences that make equating a digital sign with a kiosk disingenuous at best. Let's start by considering typical applications and use cases. For many people -- and especially for the majority of AV dealers who might sell, install or maintain a small digital signage network for a client -- the digital signage "application" is nothing more than the display of content on the screen. There may be extra complexities like scheduling, dayparting and the like. But the vast majority of the time, a digital sign will only require use of the basic features of any out-of-the-box digital signage package. The majority of kiosk projects, on the other hand, require either application customization or software development, which in turn requires a lot more planning and technical know-how. Also, kiosks are by definition transactional. I don't necessarily mean that they take money for products, but rather, the user gives something (time, effort, or money) and gets something back in return. This has significant implications for everything from placement to maintenance to figuring out a return on investment.

Bottom line: unless you know that your kiosk project can use an off-the-shelf application that you've worked with before, the typical kiosk will have a longer lead time and be more difficult to deploy than the typical digital sign. There may be exceptions, but I'd consider this the rule.

On the heels of the guy pitching kiosks as digital signs was a reputable screen vendor proclaiming the myriad benefits of selling digital signage solutions, not the least of which (according to him) was the ability of the AV dealer to make some extra money by selling ads onto the screens he's installing. After all, why get paid just once for installation when you can build up a recurring revenue stream, too? Well, I can give you a bunch of reasons why not. In fact, I did that just a few months ago when I looked at why people are so enamored with ad-driven digital signage networks. But suffice it to say, 99.999% of AV dealers are never going to be able to sell a single ad. It's just that simple. And unless these AV dealers want to dramatically change their existing business models and hire a professional sales staff, they will never make money with digital signage advertising.

In fact, when NEC originally came out with VUKUNET and touted the creation of a secondary revenue stream as one of their main drivers for picking up resellers, many in the community pointed out how ridiculous that was, and most of us wondered if NEC was being intentionally misleading. However, I just saw LG announce a similar SaaS-based product yesterday, making many of the same claims. Thus, I have to wonder if these big screen makers simply don't get it.

Overall, it seems like our industry is finally getting its act together. While there's still plenty of hype out there, we've witnessed a lot of real news, big wins and major business and technical advances that give me the impression of a more mature, responsible marketplace. But clearly our work is not done yet. Whether intentional or not, the careless rhetoric above probably confused or misled a lot of people at this one small show. And there are many other shows just like it, serving a community of thousands of potential VARs and resellers, all of whom might now be indoctrinated with an incorrect set of beliefs. Our industry's nonprofit organizations should probably start thinking about this sooner rather than later. We're on the precipice of a massive wave of adoption, and except for industry insiders (who are presumably already somewhat educated), nobody knows that folks like POPAI, DSA and DSF even exist. That needs to change if we're going to have any hope of arming people with the right information before they dive head first into digital signage.

Have you heard any other myths about kiosk applications or digital signage business models? Where did these misconceptions arise from? Leave a comment and let us know.

0 # Tim Burke 2010-10-01 18:13
Good article and I agree whole heartedly. This is why all of the industry associations must do a better job with the educational aspects of their missions as well as do a better job driving awareness of themselves. We've been building kiosk applications and doing integrations since 2004 and customers today more than ever underestimate the time to build the challenges of a deployment and the efforts needed to maintain and monitor kiosks in the field. We have to educate everyone we talk to and that is a challenge.
0 # butch Bowling 2010-10-04 13:52
Please remove this address from any and all of your address list please!!! Thanks Butch
0 # Steve Gladden 2010-10-04 16:57
Bill, if i had the option of titling my responses it would be "Thrown for a Serious Loop." As much of your writing as i read, i have never been more thoroughly confused than i am right now. But it is sincere confusion, not condescending "WTF" confusion. 1. there's enough positive spin associated with digital signage to stifle the typical worries about cost, complexity and ROI. Please point me in the direction where i can find some of this - it would come in handy. 2.a small digital signage network for a client -- the digital signage "application" is nothing more than the display of content on the screen. Isn't that perception a bad thing, that over isolates the use of "digital signage?" 3. But suffice it to say, 99.999% of AV dealers are never going to be able to sell a single ad. It's just that simple. And unless these AV dealers want to dramatically change their existing business models and hire a professional sales staff, they will never make money with digital signage advertising. Now i am just confused because its a statement like this that made me feel you and I were on the same page :) Can we talk some time offline Bill? I really do want to understand more about DS vs. IDS vs. Kiosk Thanks
Refresh comments list
RSS feed for comments to this post
JComments