Why Are We So Enamored with Ad-Driven Digital Signage Networks?

Tweet
Earlier this week I participated in a conference call with a writer who is fairly new to our industry. He posed a simple question: "why is the digital signage industry so enamored with advertising?" My immediate answer was, "beats the hell out of me." But that was somewhat unsatisfactory, so I made a little list of potential reasons why everybody from one-man startups to Fortune 500 companies feel they simply must get into the digital signage advertising business, one way or another. After writing down just a few items, it suddenly became abundantly clear why there's so much hype in our industry, especially compared to the amount of actual business being done.

Advertising is where the money is (or could be, at least)

This one's the low-hanging fruit. A number of national advertisers have ad budgets that exceed the GDPs some small countries. And for each of the past five years (even including the last two really ugly ones), the total ad spend inside the United States has been over a quarter trillion dollars. Stop and think about that for a second, and you can start to understand the allure of going after advertising dollars. 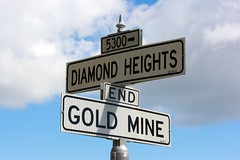 Image credit: Marcin Wichary
Of course, when you get down to the nitty-gritty, only a tiny fraction of ad dollars are being put into any kind of digital out-of-home right now, and advertisers, brand marketers and media planners don't seem to be in too much of a hurry to change that. Oh, and you have to be able to actually sell ad time to reap any of the rewards. So, all of those AV VARs out there who are hocking "free" products that promise a lifetime of easy (and perpetually recurring) ad revenue are going to be sorely disappointed.

Advertising entices people with the lure of the unknown

This argument starts out with clichéd axiom #1: The grass is always greener on the other side of the fence. And for many people who have spent their careers working in technology or sales, digital signage seems to be exactly on the other side of the fence that they've found themselves up against. It's reasonably familiar, yet just slightly different and more exotic than what they're used to. That exoticness, I posit, gives many of these people enough imaginary license to ignore harsh realities like "I've been terrible at selling everything in the past, so why would this be any different?" Instead, they just presume that everything will work itself out later.

Needless to say, it doesn't usually turn out that way. So we end up with clichéd axiom #2: hindsight is always 20/20.

As I made my way down the list (I have another half dozen or so reasons in addition to the two biggest ones above), I decided to put my vendor hat back on and figure out why so many digital signage hardware and software companies contribute to the fantasy of an advertising-driven paradise. The answer there is simple: a lot of leads come in already believing that it's within reach. As vendors, we either try to educate them (which turns many of them away), or we humor them and take their money. And as long as the products that each of us sell actually deliver on the features and functionality that the customer is looking for, it's hard to fault the vendor if the customer's half-baked advertising sales plan goes awry.

While I'd love to say that every digital signage vendor always operates with the best interests of their potential customers in mind, from the amount of noise in the industry press channel it's quite clear which approach most companies take. For example, there are innumerable examples of vendors issuing press releases "on behalf of their clients". In the typical scenario, the vendor is announcing the deployment of a 500-location advertising network when only the first few sites are in place (if that), and the rest of the deployment is contingent upon hitting performance goals -- a rather important detail that you'll rarely see mentioned in a press release. This type of boasting does nothing for the client, but it does make it look like there are many more big, successful networks in operation than there really are. Which is why every Friday (it seems), I get four or five calls from venture capitalists in various stages of due diligence, asking why my curmudgeonly blog posts go against everything they've read on every other site on the Internet (with the usual exceptions of Adrian's, Dave's and Ken's blogs).

What role will advertising play in the future of our industry?

Ultimately, while people like Steve Gurley have come out with reports suggesting that digital signage advertising will likely never take off in a truly spectacular fashion, I believe that ad-driven networks will continue to play an important role in the industry's growth. I do think it's a little disingenuous to cite advertising as being the key to the industry's long-term success, though. And I would like vendors to stop spreading half-truths about how easy it is to monetize screen time just to score a few easy wins. That kind of misinformation leads a lot of people down the wrong path, causing a lot of waste and inefficiency in the process.

Of course, if you have a solid sales model and a means of actually closing deals with potential advertisers -- and you're not dependent on impossibly unrealistic goals like securing ten national advertisers during your 30-day pilot project -- running a successful advertising-driven digital signage network is not out of the question. But for the vast majority of people who undertake the task, it is a lot harder than they originally expected.

Who's to blame for all the hype surrounding advertising networks? Is this even really a problem? Leave a comment and let us know what you think.