Tweet
One week and about a hundred survey responses later, it looks like last quarter's optimistic predictions haven't come to pass. Despite early indications that Q2 2012 was going to be a strong one for the industry, the results of our most recent quarterly survey suggest flat growth, although respondents continue to show optimism about the future. Is that optimism warranted, or is it just an attempt by industry vendors (who make up nearly half of the respondent base) to create a self-fulfilling prophecy? Let's take a look at the numbers.

What happened in Q2, and what do people expect for Q3?

As always, we'll start with the charts: 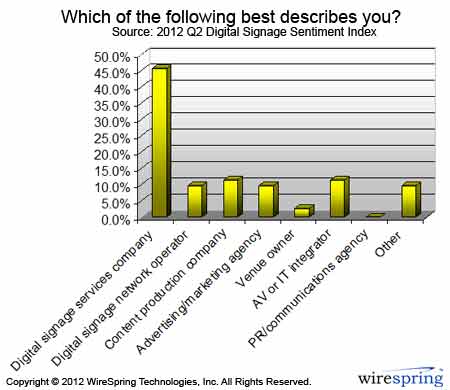 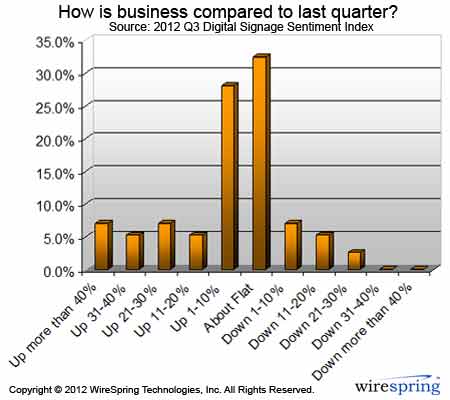 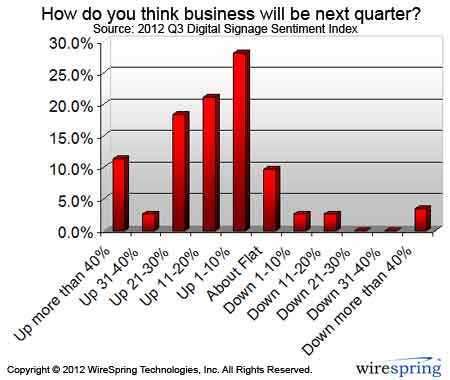 From the first chart, you can see that our respondent base is vendor-heavy, though network owner/operators, integrators, content firms and agencies all make a respectable showing. The real change compared to the Digital Signage Sentiment Index for Q2 comes in the second chart, where it's obvious that things were "about flat" for many, many more people than before -- and certainly more than expected it in last quarter's survey. Additionally, any growth that did occur was mostly in the single-digit range (despite last quarter's expectations of a 21.6% improvement over our baseline number). Still, when all is said and done, respondents reported an average net growth of just over 7%. While that's not stellar, it's still pretty decent -- to put it in perspective, a company's revenues would double in about 2.5 years if it experienced 7% growth every quarter. Last but not least, respondents are still excited about future opportunities if the third chart is to be believed. On average, they're aiming for 13.1% growth next quarter, which compares favorably to the 10.6% they hoped to grow this quarter.

By and large, this data makes sense to me. The summer months have traditionally been slower for us -- enterprise deals grind to a halt as busy execs take their vacations, and smaller deals slip by a few days or weeks here and there as business owners deal with other priorities. Consequently, I expect next quarter to be busier than this quarter, and it seems my counterparts at other companies agree.

Last quarter, we introduced a new chart to illustrate what would happen if future growth predictions came true compared to what actually happened. As you can see, after factoring in this quarter's revised expectations the gap between dreams and realities has started to widen a bit:

We're still looking at a (slightly) upward trend, althought it's clear that many have been hoping to achieve more than is realistically possible on a quarter-to-quarter basis. While it'd be really nice if this changed in the near future, my crystal ball is way too fuzzy to say that it will (or won't) for sure. In the past, we've remarked that the digital signage industry has tracked macroeconomic trends fairly closely. But as we gain additional insight, it's clear that this isn't entirely true. All I can say for sure is that the industry is growing right now, and if past results are anything to go by, it will probably grow a bit more (hopefully in the range of 5-10%) next quarter. If that's the case, we're still pretty healthy, since it would put the industry on track for cumulative growth of 19% or more during 2012.

+1 # Gary Halpin 2012-08-02 14:15
Hey Bill, I'm not sure if it's a summer slowdown (although you may see this trend every year, not sure), but rather companies realizing our recovery is a fake one. Unfortunately, the economic situation doesn't look good, and not just for the US, but for the entire world, thanks to a fake, fiat-based currency that dominates the planet. We believe we are in a few niche verticals that will do better than others, but 20% growth is probably out of the question. As a Cubs fan, I'm used to saying, 'just wait till next year.'
+1 # Bill Gerba 2012-08-02 14:24
Ah, Gary, glad I can always count on you for the balanced, unbiased Libertarian viewpoint :) Seriously, though, how many digital signage-related blog posts get to start out a comment thread with a discussion of fiat currency? I agree with you, though, 20% growth seems nearly impossible, though there are some sectors that are outright prospering right now. Maybe they'll buoy the rest?
0 # jelly andrews 2012-10-16 03:43
Interesting! This is such a great post. Thanks for sharing this one.
0 # Candy Smith 2013-03-11 08:02
Thanks a lot for sharing such interesting information. It is really nice to know these data. Impressive!
Refresh comments list
RSS feed for comments to this post
JComments