Tweet
Last week, we asked for your help assessing the health of the digital signage industry. A few days and about a hundred survey responses later, it appears we have at least a small reason to celebrate: industry suppliers and participants indicate that the industry has grown a bit, and some (very) preliminary data shows that the estimates and forecasts supplied by last quarter's survey takers might actually turn out to be pretty accurate. If you recall, in the Digital Signage Sentiment Index for Q1, just over half of respondents felt that Q1 2012 would be stronger than Q4 2011. About 30% expected modest growth of 1-20%, though about 11% expected to see growth of 40% or more. When asked to prognosticate about this quarter (Q2 2012), 75% expected additional growth, with 10% predicting growth in excess of 40%. Let's take a look at the latest numbers and see how things stack up.

So, how was Q1, and how are people feeling about Q2 and beyond?

To begin with, here are the charts for this quarter's Digital Signage Sentiment Index: 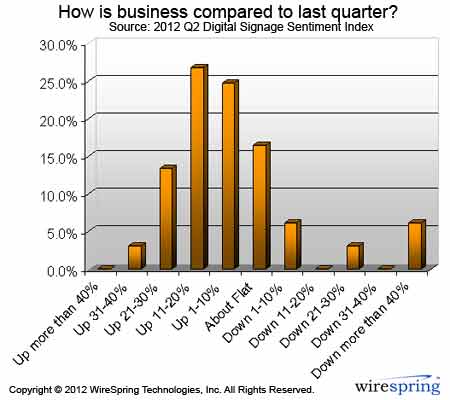 As you can see, just as before the majority of respondents are digital signage service providers, with a mix of network owner/operators, agencies, venue owners and others making up the rest. From there, the results change a bit. Whereas most respondents last quarter felt that business was "about flat", this quarter more of them suggested things were picking up, with about 27% saying it's up 11-20%, and another 25% or so saying it's up 1-10%. Last quarter's respondents were more unevenly optimistic about the future, though: a bunch (about 10%) thought they'd see a 40% increase in the coming months, which kind of offset the less optimistic folks who expected smaller gains and even (gasp) some declines. This time around, expectations were more evenly distributed. While there's still plenty of optimism, it's now more universal and also more conservative: 30% expect to see growth of 1-10% in the coming months, and another 27% expect growth of 11-20%. Rounding things out, about 11% expect growth of 21-30%, about 8% expect growth of 31-40%, and just 3% expect growth of 41% or more. For all that, though, the average growth forecast for next quarter is almost exactly the same as it was last quarter -- almost exactly 10%.

One of the interesting things about a survey like this is that we can start to put together solid trend data in a fairly short amount of time. Consider the chart below: right now it doesn't have a whole lot of data, but what's there is encouraging:

Actual performance numbers are already sticking pretty close to forecast numbers, and as time goes forward, that will hopefully continue. But even if it doesn't, plotting the actual versus estimated numbers should help to keep us honest. At some point, we can probably even combine this data with our meta-analysis of digital signage market statistics from some of the major research firms to see if our informal study agrees or disagrees with what the big boys say.

Last but not least, a few caveats

No analysis that I turn out would be complete without its own list of faults and shortcomings, and this one is no exception. Most notably, we got fewer results for this survey than our last one -- only 97 in total. While this should still be large enough to yield some statistically significant results, it highlights a couple of problems we've encountered, some significant and some less so. First off, after publishing the survey last week, I tweeted the wrong link, so a whole bunch of people got sent to a completely unrelated page. Second, I expect we're starting to see a bit of survey fatigue: we've been doing a lot of surveys lately, and I think people are just getting tired of them, since we tend to hit the same pool of potential survey takers over and over and over. Finally, and perhaps most importantly, we're probably starting to see the beginnings of an adverse selection problem with our Digital Signage Sentiment Index. People want to say things are good because they fear negativity might deter future clients. Consequently, those who might have something bad to say probably prefer to say nothing at all, even anonymously, so we're just left with the industry boosters.

Despite these problems, I think this quarter's results already start to demonstrate the usefulness of this type of simple, periodic industry survey. That said, I'd love to hear any feedback you might have for improving these results or tracking other important industry metrics. As always, leave a comment or send me an email to share your thoughts.
JComments