Tweet
Big networks of screens in heterogeneous venues spread out across the country are not the future of digital signage. In fact, they're not even the present. And they were never the past. There, I said it. If this sounds like a rant, that's because it is. In the past six months or so, a number of big (or potentially big) networks have gone on money-raising, company-buying binges with the aim of putting screens in virtually every kind of venue you can think of. The end game, they claim, is getting a bigger piece of the advertising pie than digital out-of-home media has ever commanded. But I'm just not convinced that "more" equals "better," and I'm certain that while big digital OOH networks get the lion's share of press in trade mags and mainstream industry coverage, they command a small and shrinking percentage of the pie in terms of the percentage of out-of-home screens dedicated to the cause.

I know advertising is cool and all. It's the reason that most websites don't have to charge for their content and I can still watch 30 Rock on NBC for free, so don't think I don't appreciate that. But advertising some random product across a hodge-podge of unrelated places is probably the thing digital signage is least good at doing.

The struggle between relevance and reach 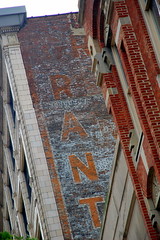 Image credit: Steve Snodgrass on Flickr
I didn't used to think this way. Just a few years ago, when it seemed like PRN was announcing the addition of a new grocery chain or big-box retailer every week, the model made sense to me. Their aim was (and still is, I think) to deliver contextually-relevant advertising information to viewers at or near the actual point of sale, which seems like it ought to work. But with the birth of aggregators and agglomerated networks like RMG, the pitch to advertisers has been reach and frequency, not relevance. From a business perspective, I understand why they did this -- media buyers and planners understand reach and frequency. But relevance is still a new concept to them, and if there was ever a group resistant to change, it'd be the buyers and planners.

However, once you start dealing in the currency of reach, you wind up sacrificing context, at least to some extent. And context is really the thing that makes our medium unique. There are still plenty of networks and meta-networks that let you find and focus only on contextually relevant screens. But the big network players know that you can't have your cake and eat it too. So they're forced to be very selective about who they pitch with "reach" and who they pitch with "relevance."

Thankfully, even if agglomerated DOOH networks grow tenfold over the next decade, they'll pale in comparison to the other applications we'll find digital signs being used in. In fact, I'd bet good money that everything except big, heterogeneous DOOH networks will make significant gains in the coming years. Why? Despite the challenges of running a smaller digital signage network, the small DOOH networks -- plus non-DOOH networks of various sizes -- have a better chance of delivering real, substantive value to the end user than big DOOH networks do. Consider these examples: For years, people have been saying "Follow the money... where ad dollars go, so will DOOH," and I believed them. It's hard to ignore the multi-hundred-billion dollar spend-fest that is the US ad market, and all of those arguments about just needing to secure a mere percent or two to ensure success made perfect sense to me. And in fact, the coffer doors might still open for some of the top-tier networks who have made it their mission to spread homogeneous advertising content across the country in yet another way. But a quick look at the offerings of the top handful of product vendors indicates a shift in market perspective. While there are still plenty of ad management platforms and tools to help with the automation of advertising displays out there, the vast majority of innovations lately have focused on making digital signage simpler, cheaper and more accessible to mere mortals. So I'm still going to follow the money... only this time, I'm following it away from Madison Avenue.

What will the prevailing trend over the next decade be? The consolidation of small networks into larger ones, or the proliferation of tightly-focused micro-networks? Leave a comment below and let us know!

+1 # Gary Halpin 2011-01-06 21:15
Great post Bill. I couldn't agree with you more, and we have tried very hard to avoid the strategy you write about. We have always been about relevance and our latest network has proven some of your points. We are catering to the individual locations, helping them not only increase sales but also create a better shopping experience for their customers. And the vendors whose products line their shelves also like the relevance, i.e. the highly targeted viewer.
-1 # Peter Ingram 2011-01-06 21:32
ITMm with you, Bill. Classic example of a failing change-management effort. Digital signage providers sought to change the content and metrics of marketing, but the reality is that the media buyers (among others) are going to resist that to the bitter end. And they hold the budgets in their grasp. On the merchandising side, itTMs proven unrealistic for network operators to count on trade dollars in any sustainable sort of way. The merchandisers are reluctant to engage in initiatives that are new and unfamiliar to them. Matter of fact, itTMs a common trait in all people to resist change. Thanks for the very honest, open commentary. Not many in the DOOH space are willing to acknowledge the white elephant. Bully for you! HowTMre things?
-1 # Martin Lessard 2011-01-06 22:20
Right on the money again Bill. non-advertising money that is :) As it is true for google and other players who enjoy great successes with online keywords advertising, context and relevancy are the future for any profitable digital signage venture. Not only is it sought after by advertisers, but more and more by brand managers looking for better returns on their markering dollars and profitable revenues. Connecting digital signage to the CRM platform in order to deliver messaging in a contextual basis to the right audience will also become key.
-1 # Waymor 2011-01-07 09:16
I designed a DOOH network of touchthrough window terminals placed inside window facing high pedestrian trafic sidewalks. The network consided of 20 terminals located within a few blocks in the downtown area of major cities within the Province of BC. The network would eventually spred out to smaller nearby communities in batches of 20 terminals each. The content is derived from the info providers own website. Theses terminals have all the necessary links and touch buttons to navigate through the seleted web sites. Flash ads are intersperced to provide messages of interest to the local community. It would be supported by charging the info provider a monthly fee to run their websites on the network with charges applying to each group of 20 terminals. The network provider is reponsible for all aspects of the network including software and hardware. An inhouse telephone marketing group, headed by an experienced marketing manager, is responsible for soliciting the Ino Providers. Some pages will by necessity be created inhouse ie the flash ads and add on pages to an IP's web site. Unfortunately the cost of implementation exceeds 2.5 million dollars for which I produced a complete business plan including all the finacial variables. What do you think of this Bill.
+1 # Bill Gerba 2011-01-07 14:27
Waymor: Per our 2010 [[http://www.wirespring.com/dynamic_digital_signag e_and_interactive_kiosks_journal/articles/The_2010 _Digital_Signage_Pricing_Study__Costs_Have_Fallen_ 14_-785.html|digital signage pricing article]], including some base number for content and personnel costs it takes about $497/month to install and operate a sign (based on a 3-year amortization). Multiplying that by your initial number of 20, I only come up with a figure of around $350K. Even allowing for an extra layer of "management", I can't imagine you'd more than double that figure to about $700K. What on earth are you preparing to spend 4X that amount on?
-1 # ace 2011-02-10 20:00
Good job guys i really like the digital signage, this is great unlike the others..thanks for posting.
Refresh comments list
RSS feed for comments to this post
JComments