Tweet
About a month ago, we asked our readers to tell us who their favorite AV or IT equipment distributor is. If you've been involved with any large-scale IT rollout, chances are that you've run into challenges sourcing equipment from these logistics and warehousing behemoths. And while none of them are perfect, some are certainly better than others. We collected almost exactly 100 responses to our survey, and were expecting to see a broad range of responses in a normal bell-curve distribution. In other words, we were NOT expecting to see one company capturing such a large percentage of the votes. 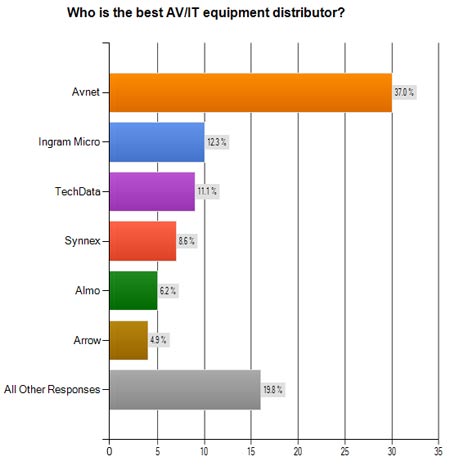 I don't know if Avnet was actively asking their customers to fill out the survey or if people have just had uniformly great experiences with them, but if there was a "winner" of this poll, it was them. (As a brief note, I don't think WireSpring has ever worked with Avnet, so this isn't an advertisement -- and your mileage may vary.) Avnet had literally triple the number of votes of their next-closest rival, Ingram Micro, and nearly double the votes of the bottom half of the companies combined.

Long story short, when choosing an IT or AV equipment distributor in the future, don't necessarily ask yourself who got the most votes in this poll. But you might want to ponder why distributor XYZ barely got any votes at all. I think that's a lot more telling.

While we're on the topic of surveys, we're eager to get your feedback on the industry's performance this quarter. Since our analysis of the Digital Signage Sentiment Index for Q3 2012, the Platt Retail Institute released their own findings, indicating that their indexes reached the lowest levels since they began tracking the data in late 2009. As we noted last time, while many of our survey respondents reported a flat Q2, the average growth during that period was actually a very respectable 7%, and the outlook for Q3 was a positively rosy 13.1%. How did things really turn out? You tell us: take our 3-question, 30-second Q4 survey, and we'll post the tabulated results right here next week.

You know the drill...take the survey!

As always, it's our hope that your honest answers to our quick, 3-question survey will give a genuine perspective on how the digital signage market is really behaving. And of course, if the good karma of helping out fellow industry folks isn't enough, we always publish the results, including simple regressions against past data, for free right here on the blog.

Help us find out if any of the first three quarters' predictions came to pass. At only 3 questions long, this survey is super-quick to complete, and will continue to serve as a free and open barometer for the industry -- as well as a source of historical data.

If you're reading this article in a web browser, the survey should appear below. If you don't see it, simply click this link to take the survey.


What has the Digital Signage Sentiment Index taught us so far?

The main point of our quick-but-frequent polling is to figure out whether the digital signage industry at large is a good predictor of its own growth. We continually ask you, the reader, to tell us how your business is actually doing right now, and how you think it will do in the future. As we collect these data points over time, we can get a picture of whether or not we're optimistic, pessimistic, or realistic as a whole:

Perhaps the most interesting thing we've learned this year is that while our respondents keep predicting that double-digit growth is right around the corner, the reality is more modest, with periods of low single-digit growth being the norm for the digital signage sector. I'm curious to see if that trend continues to be reflected in the latest quarter's responses, and I look forward to sharing the survey results here on the blog next week.

+1 # Miranda Cocks 2012-11-16 10:20
I guess it still needs time to have a significant increase in sales worldwide. There are still countries who are not adopting to this type of information awareness or advertising scheme especially third world countries. But it is definitely going somewhere.
0 # Sean Langdon 2012-11-29 17:20
Thanks, Bill! And no, as far as I know, we didn't try to skew anything. Love, Sean
Refresh comments list
RSS feed for comments to this post
JComments