Analyzing the Historic M&A Deals in Digital Signage and DOOH

Tweet
It's a little early to start writing about the mergers and acquisitions that have happened in the digital signage and DOOH space for 2012, since there are still a couple of months left in the year. However, I recently had the opportunity to speak on this topic at the Strategy Institute's Digital Signage Investor Conference, and it would be a shame to just let the data I gathered sit around and gather dust. So today, I'd like to take a look back at some past deals, talk about why companies in our space have so much trouble making a successful exit, and consider some strategies to bolster the odds when it comes time to sell.

Back in 2005, we were stunned when Thomson (now Technicolor) bought PRN for $285M. At the time, it was the largest deal our industry had seen, and over 7 years later I think that still might be the case. In 2006, it was equally amazing to see tiny digital signage software company Wireless Ronin go public on the NASDAQ exchange and soon have its shares trading at $10, giving the company a $70M valuation on gross sales of just a few million dollars.

I mention these deals not necessarily because they were the biggest or the best, but because they represented a time when digital signage was thought of as a strategic benefit for forward-looking companies. For me, a strategic deal is a deal in which the newly-merged entity is in some way greater than the sum of its original parts. From the buyer's perspective, this is good since it opens up new markets, exposes them to new opportunities, and otherwise allows them to grow in a way they previously could not. From the seller's perspective, this is good since they are able to get top-dollar for their firm -- or what I call a "strategic valuation" -- calculated based on the strategic value of the asset, not simply some multiple of sales or earnings.

We've written two articles in the past that simply attempted to list out all of the relevant deals in our space. At first glance, the transactions on our 2008-2010 M&A list and our 2011 M&A list look impressive. For example, from 2008-2010 there were roughly 42 high profile deals in our space, but in 2011 alone there were 33 and as of October there were already 32 in 2012. From a pure numbers perspective, that seems like a lot. However, upon taking a deeper look, many of these deals were done by unhealthy companies who had little option but to do something -- anything -- or go out of business. In fact, when we recategorized the deals by type, we found that most fell into one of three categories: strategic deal (as defined above), asset sale (where the company is no longer operating, but has IP or hard assets that another firm purchases), and restructuring (includes private equity raises, recapitalization and bankruptcy restructuring). Separating the deals out into these categories gives a better picture of what the deal flow in our industry has really looked like: 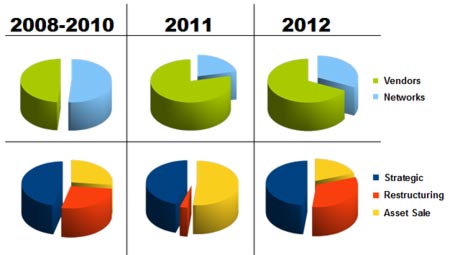 While some acquirers have tried to think strategically over the last 5 years, most have been merely opportunistic, tucking in small companies who have fallen on hard times, or purchasing the assets of the many who couldn't quite make it. PE firms have continued to invest funds, but the money has primarily gone to existing portfolio companies. The net result is that very few deals in our space create entities that are greater than the sum of their parts.

Taken from another perspective, it seems likely that many vendors, who generally can't just "scale up" to boost profits, started to peter out in the second half of last decade. With commoditization and a vicious race-to-the-bottom in play, many of the 600+ started looking for a way out, many of them much too late. Companies that are so far gone as to look for mergers or acquisitions of necessity don't do well at the bargaining table, but they might be the lucky ones. A cursory look around the industry suggests that there will be more to come, and with interested buyers already having made their acquisitions, this will probably translate to more simple wind-downs and bankruptcies.

What can be done?

At this point in the market cycle, DOOH network owners and digital signage vendors are unfortunately left with big, scary choices if they still want to achieve a successful exit at a maximal valuation. For DOOH network owners, we feel that the biggest chance for success comes from building scale early on, and as quickly and continuously as can be practically maintained. In other words, if there's cheap money out there, use it to build front-loaded scale. For digital signage vendors and ecosystem players, the quest to find a strategic buyer will likely only be fruitful if you identify a growth niche where your technology plays and focus 100% of your efforts on it (unless you really think you have sufficient resources to pursue a dual-path, I suppose). For all parties, we recommend that you of course keep primary business objectives front-of-mind, but don't lose sight of what potential acquirers might be interested in.

I hate making predictions, because they always end up being wrong to some extent or another. But I know people love reading them, so here are 5 that I think are reasonable for the near-term: What do you think about these predictions? Do you have any predictions of your own that you'd like to share? Leave a comment and let us know.

+1 # Gail Chiasson 2012-10-25 17:19
Thoroughly enjoyed your talk at the Investor Conference and glad to get today's copy. It'll be a great reference document. A keeper.
0 # Marshal Ely 2012-11-02 13:24
Although it is true that digital signages are expensive at the beginning but it will pay off sooner or later. It will even become more cost-effective in the long run due to its easy and changeable programs and presentations.
0 # jelly andrews 2012-11-16 00:56
Great posting! This is interesting. I agree with your prediction that there will be more consolidation. Smaller companies will realize the benefits of combining their company with others. It would be easier to secure good management in large companies.
0 # Candy Smith 2013-03-28 09:23
Great posting! This is really informative. I am glad you shared something like this. Thanks for sharing.
Refresh comments list
RSS feed for comments to this post
JComments