A Fresh Recipe for a Supermarket Digital Signage Network

Tweet
A while back, a colleague asked me to vet a business plan for an ad-funded digital signage network to be installed in a major US grocery chain. It had all of the "must haves" for such a network, including a good-sized pilot, plenty of screens in desirable DMAs, and a nod to social networking with some quasi-interactive content. In short, it looked like just about every other big-box or grocery chain network out there. That got me thinking: there have been lots of failures in the grocery space. LOTS. And there's currently a ton of mediocrity. But I have a hard time pointing towards anybody who has truly succeeded in making a great digital signage network for grocers. So when speaking with my colleague about past issues and my concerns about the plan, I laid out an alternate, best-case scenario that I thought would offer the greatest chance for long-term success. We've done these thought experiments with a number of customers over the years, in dozens of different industries. So if you find this sort of analysis useful (or at least entertaining), perhaps I'll make this type of article a regular feature on the blog.

If I were starting a supermarket digital signage network, here's how I'd do it 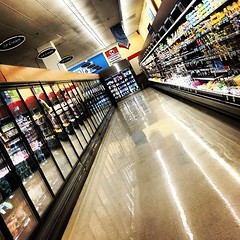 Image credit: danielle_blue on Flickr
To begin with, grocery and big-box networks fall into one of two general categories. The first group is internally-funded networks, where the venue owner owns and operates the signage network outright, such as experience, branding and private label networks and private label merchandising networks. The second group is externally-funded networks that are monetized by advertising revenue, where a dedicated company owns (in whole or in part) and operates the network, even though it is physically located in another company's venues. There are numerous examples of both types of these networks, but for the purposes of this exercise I'm going to assume the latter case, since they seem to be more popular with the folks I talk to. In these scenarios, we know that getting venue buy-in is absolutely critical. Thus, the first things that I'd do prior to developing a new network would be to: I, the network owner, would then: Why this approach makes sense

By starting out focusing on just one area of the store, and by using the private-label products that the grocer controls all of the data for (including their profitability), I'd stand the best chance of getting information about performance early enough to make changes (since I certainly wouldn't find the most efficient mix of content on the first try). Also, by starting with private label products (which are much higher margin than name brand products), I'd stand a better chance of enticing the grocer to expand the pilot if the results are good. And finally, since the pilot is deployed in such a small number of stores, I know I would have a very hard time attracting third-party advertisers -- and it would be like pulling teeth trying to get any information back from them (or the grocer) about results. The grocer would have no such concerns in our hypothetical pilot scenario: they're not going to care about DMAs if it's their pilot, since they use their own internal groupings. And because they have skin in the game (in the form of partly or fully capitalizing the cost of equipment), there's a much greater chance that they'll contribute the necessary resources to make the pilot -- and any subsequent expansion -- a success.

Finally, if the results do look good, you can choose how you'd want to expand, either by outfitting the same specific area in the rest of their locations, or by adding more screens to the other areas of the pilot stores and doing a second pilot phase.

For what it's worth, if you or someone you know is planning a grocery or big-box project at the pilot stage, I'd be happy to give you a great deal on software and media players in exchange for getting access to the resulting performance data and being able to write about it here on the blog. (After all, my last article about a grocery store pilot was more than 7 years ago!) I love my research, you know, and seeing how a properly-run supermarket pilot progresses would help me prove (or disprove) a number of theories that I've been pushing around.

-1 # Jim Lukens 2013-04-04 19:25
We work exclusively with supermarkets and provide digital signage services - primarily content. I've been in the supermarket business for 40 years and have seen many, many vendor funded programs fall apart in supermarkets. We clearly understand the value of having Unilver, Proctor & Gamble, Kraft Foods, etc. funding networks but what our experience is that grocers want to sell more high margin foods...... and provide information to help differentiate their store/format from others in the marketplace. It's not about how much money a grocer can leverage from vendors to sell more of their products in a store. It's all about enhancing the customer experience with helpful information, appealing content (to make them hungry as they shop), and to connect with customers around food events (holidays). We worked with a very high volume grocer several years ago on a pilot to demonstrate actual sales lift, margin lift and customer satisfaction level improvements and the data shows that hungry people buy more high margin foods. Sales lift in the 100% range for digital vs. static signage stores when comparing test stores with control stores.
-1 # Stephen Ghigliotty 2013-04-05 12:41
Provide the brands the ability to run full screen content...or even better, have the network set up that way by default. Far too many DS networks slice and dice the screen into too many active regions...reducing ad awareness and retention.
-1 # Nick Trendov 2013-04-05 14:00
Bridge to a mobile phone or tablet and allow the visitors to self-declare so that Ads and Content aligns to their top-of-mind 'success outcome'or current Persona. Fast easy and can be started with txt, QR codes or UPC codes immediately until the shelf screens are deployed.
+1 # Bill Gerba 2013-04-11 19:43
Jim: Some of the best POP campaigns of any sort -- static or digital -- that I've seen have been for private label products. When the store has real skin in the game -- not just in the form of cash, but also brand cache (see what I did there) -- they work harder to make the program a success. Combined with the higher margins that these products generally offer, I still think they're the "low-hanging fruit" for anybody interested in starting a new in-store digital network for supermarkets. Stephen: Agreed! Nick: I've seen plenty of examples of these on both print and digital applications, but never any data about performance. Any ideas?
Refresh comments list
RSS feed for comments to this post
JComments