3 Reasons Why Mobile Marketing Will NOT Replace Digital Signage

Tweet
Mobile marketing might be the only industry surrounded by more hype than our own right now, and that's really saying something. The mobile marketing folks have conferences, launch parties and industry associations that make the digital signage bandwagon look cautious and reserved by comparison. Yet when it comes to showing real, meaningful results and genuine conclusions, they're in the same boat as we are. Thus, I was extremely amused to come across a recent blog post that humbly declared "digital signage is dead." The killer? Mobile marketing.

Well, I'll be the first to admit that some areas of digital signage are pretty sickly these days, but really... dead? Of course, I'd be willing to be swayed by a sound argument, but there I found the blogger's argument to be somewhat lacking:

...[With mobile marketing] all that is necessary is to explore and invest in methods to deliver a message or a useful tool with pertinent content to the device. There is no commitment to hardware screens and player solutions with a shelf life, that has been put off onto the end viewer who now owns the system, and carries it with them wherever they go. That alone is a deal breaker for traditional methods of narrowcasting that have been, in recent years, re-packaged as "Digital Signage". 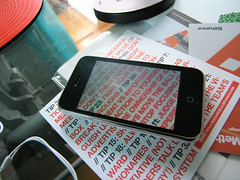 Image credit: John Manoogian III
To be frank, a scenario where the iPhone and other handheld devices eliminate the need for digital signage seems very unlikely, and I'll give you three reasons why: Digital signage and mobile marketing are natural allies

People love their cell phones and are becoming more dependent on them every day. In time, more cell phone users will be willing to accept mobile marketing. It'll happen a little bit this year, a little bit next year, and in seven or eight years, the available audience will be pretty big. In the meantime, mobile marketing will focus on those niche audiences that have a natural propensity for buying the latest gadgets and giving out all sorts of personal information in exchange for a chance to win a pair of Kelly Clarkson tickets. Billboards, posters and digital signs will continue to use "easy" mobile marketing like SMS text messaging to engage viewers and measure audience interaction.

One thing is clear, though: as long as most people either don't want ads on their mobile phone (or are unable to receive them), that medium simply can't displace well-run digital signage networks. Likewise, as long as there are brands who need a guarantee that their messages will appear at a certain place and time, there will be a need for a media channel that the venue can control. Digital signage and mobile marketing are natural allies when considered in the context of multi-channel marketing campaigns, but there's simply no way that one can do the job of the other.

What do you think? Is digital signage on the verge of being replaced by another medium? Or, will emerging media actually make digital signs more important and effective?

+1 # Ray Lind 2009-02-18 07:03
This is an interesting subject, that has ramifications far beyond what I beleive is taking place in our present time. Consider, that all forms of digital technoloy, obviously, are effecting all of society simultaneously, at least to some degree. What those effects ultimately end up being is anyone's guess. I have to acknowledge that the content in all of these applications... mobile, t.v., radio, internet, DOOH, word of mouth, must by defintion, communicate! What is being communicated and how it is being communicated, video, audio, graphicaly, contectually and all of the "art" involved in this process gets "recognized" in different ways by various segments of socities at various times, mostly dependent on your age, economic station, social status, philosophy, political outlook, etc. at the time, you are being "communicated to". What are you interested in at any given moment is more the question? Digital signage, along with mobile communication, along with all forms of communication will always matter, one way or another. How to create... (here we go), more defining, engaging, interesting, captivating, sensational important and relevant content is what really counts.
0 # June Hagman 2009-02-18 13:15
I agree, Bill, that one doesn't kill the other. In fact, we're about to use mobile to enhance our digital signs. Our hotel signage will give the guest a number to text for a special offer, directions, enter sweepstakes, etc. We'll even have a video commercial on how to use text messaging - something that print can't do very well. We'll demo how to use texting, because there are a lot of folks who don't text yet. Mobile isn't going to kill our network, it's going to serve it!
0 # Bill Gerba 2009-02-18 15:24
I do think that digital signage operators recognize the value of using a mobile call to action (e.g. text "value" to #55555 for a coupon!") both as a way to increase engagement and measure audience participation. As Ray notes above, it's becoming impossible to merely interact with one medium without being affected by another. Right now that plays against us when we can't coordinate everyone's efforts. In the future, though, it should improve things for both the marketer and the consumer since there will be less message competition and more cooperation (hopefully).
0 # Jay Patel 2009-02-18 18:26
Bill, Being in mobile trenches I DO AGREE that mobile is not going to kill (so violent) DS, TV, print or radio. In fact, mobile is pull media and need all of these channels in order to 'thrive'. Mobile needs these vehicles for exposure and will have a symbiotic relationship with other media for foreseeable future. See http://www.mobilemarketer.com/cms/opinion/columns/2656.html FYI, usage on iPhone http://maverix.typepad.com/brandingunbound/2008/10/comscore-releases-first-study-on-iphones-not-so-wealthy-demographics.html I'm a human!
0 # David Weinfeld 2009-02-18 21:22
I struggle to accept how someone could even write..."mobile marketing will kill digital signage." It's not even a vaild argument. Given that each format offers a different communication and user engagement model, it's illogical to say that one's growth would lead to the other's downfall. Did the emergence of television destroy radio? No, because they are alternate content/advertising platforms which can be used apart, or in tandem, to shape a range of marketing messages. Mobile marketing companies such as Locamoda, Bluefire Digital, MegaPhone, and Snaptell, utilize the mobile channel in tandem with other media platforms to achieve the greatest level of user engagement and spread targeted advertising messages. In leveraging the new media triad of the Web, mobile, and digital out-of-home, marketers increase the effectiveness and measurability of their campaigns.
0 # Bill Gerba 2009-02-18 22:42
Hi Jay, I had seen that Comscore report. Two things: first, while the lower-income segment is growing fastest, the higher-income segment is still the largest by a good margin. Second, my guess at why the lower-income area is seeing the most growth: younger people are buying them. Had they asked for **household** income I'd bet they would have skewed back up to the top. But for the Millenial just graduating from college and getting their first job (and probably still living at home), an iPhone isn't an affordable luxury, it's a necessity.
0 # Mobile Monopoly Review 2010-08-11 21:22
Another thing about mobile marketing's cons is that the audience that can be reached via apps and smartphones is limited. Not everyone is using a smartphone - marketers should consider this factor too.
0 # Clinton Gallagher @virtualCableTV 2012-09-21 00:36
Here we are more than three years later and mobile mania is well underway but has yet to "replace" digital signage. Digital signage has been to a certain extent "displaced" on certain types of premises such as bars and restaurant where connected TV is more appropriate. Furthermore, we've seen a "second screen" emerge enabling the mobile phones and tablets interact with the connected TV sets. In due time connected TV in our homes and within our commercial establishments will continue to serve as the preferred paradigm. This is of course as I have forecast since 2009 when the article above was written back in the day when I was scoffed at by "real" digital signage providers.
0 # Bill Gerba 2012-09-21 13:38
Hi Clinton, I think the bottom line remains: if the venue wants complete control over the screen, mobile simply can't replace signage. When the venue owns the medium, they control the message. When the viewer owns the medium, they don't. That's not to say there aren't plenty of opportunities for the two to work together. It's more that one simply cannot replace the other.
Refresh comments list
RSS feed for comments to this post
JComments