We've seen some really strange kiosks and vending machines over the years. When you're writing software for self-service kiosks and digital signage, it goes with the territory. So we asked our team to come up with a list of crazy vending concepts, and threw them into a hat with real systems from around the world. See if you can figure out which ones are real and which ones are fake:


1. "Medical" Marijuana
Something tells us this is from California. 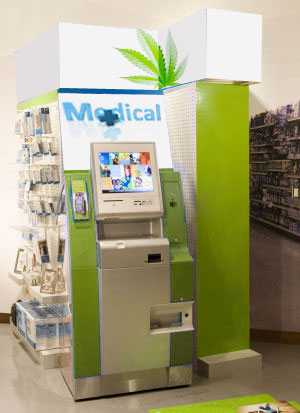 2. Balloon Animals
This is probably a huge hit in theme parks. We don't want to be around when the local clown union hears about it, though. 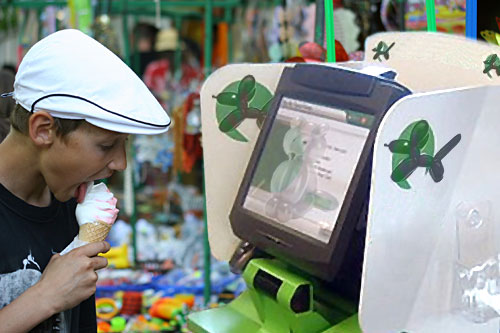 3. Flight Insurance
Too bad you can't get insurance for airline delays. 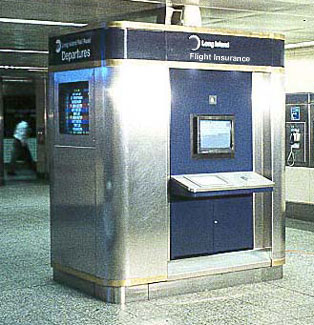 4. Breathalyzers
If you can't find your wallet to buy one, you definitely shouldn't be driving. 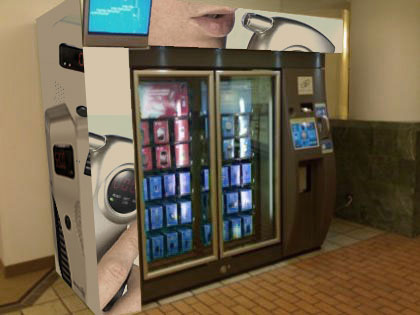 5. Sports Betting
Because blowing all your money on drinks isn't enough. 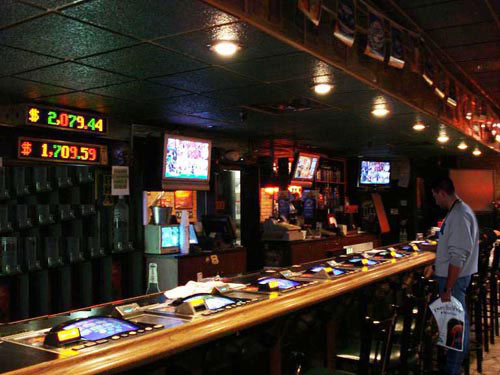 6. Umbrellas
You have to wonder if the prices are higher when it's actually raining. 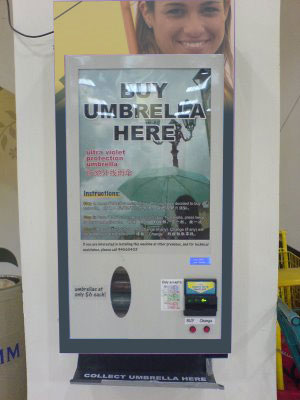 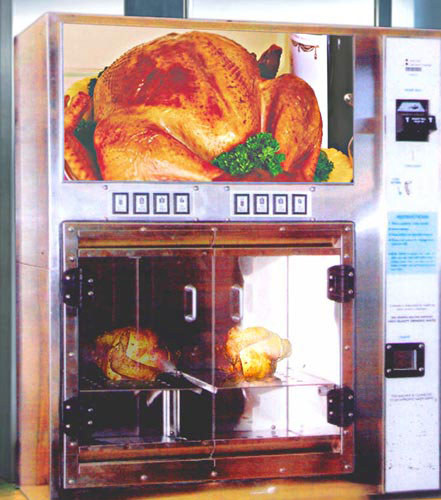 8. Batteries
Every office building and apartment complex should have one of these. 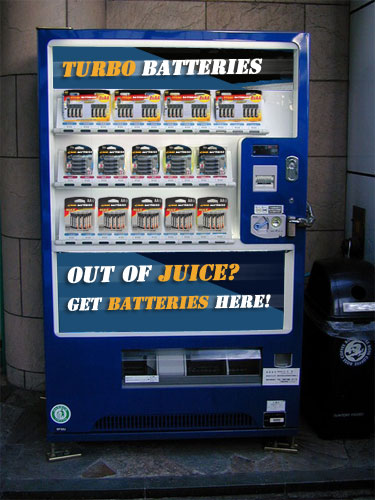 9. Fresh Lobsters
$1 is pretty cheap for a lobster. Maybe it's imitation. 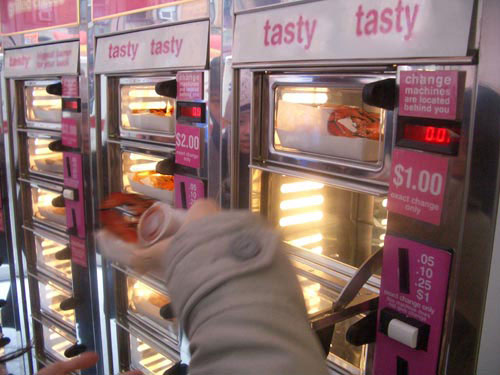 10. Toilet Paper
This is just plain wrong, unless you get a certain amount free -- or maybe it's subsidized with ads. 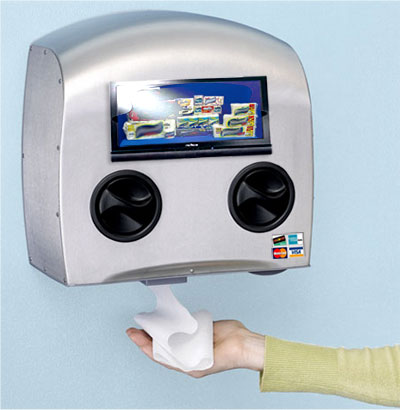 11. Life Coach
Self-improvement is a big industry, so why not provide motivational guidance on demand? 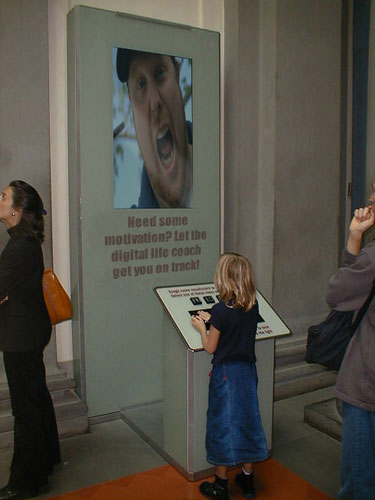 12. Church Confession
Just hope it's not being recorded and broadcast on the Internet. 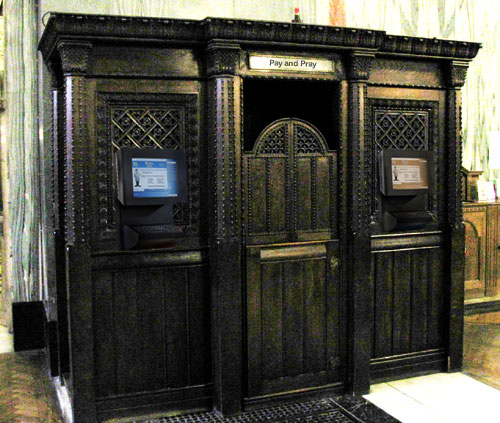 13. Office Supplies
Did someone clean out the supply cabinet without telling you? Now you can get pens and paper right in the lobby. 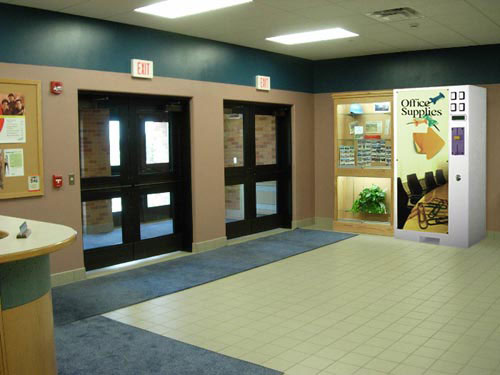 14. Pee-to-Play
The idea is that you aim your...um...stream to steer the car and win prizes. 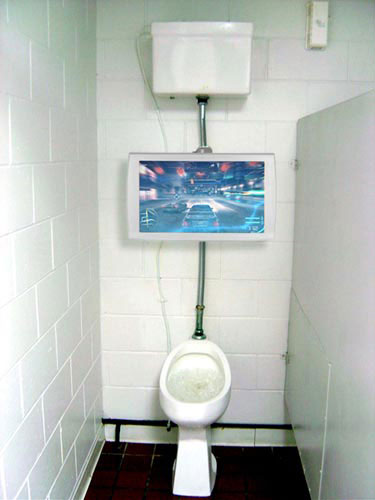 15. Tombstone Greetings
You can either record a message before your death, or have the video company make a greatest hits montage from your home movies. Creepy. 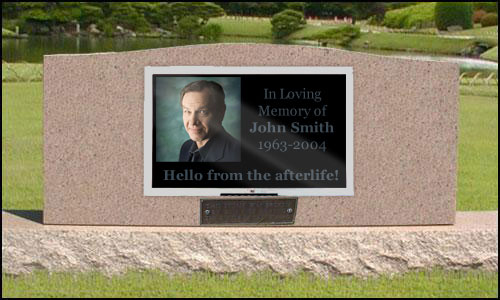 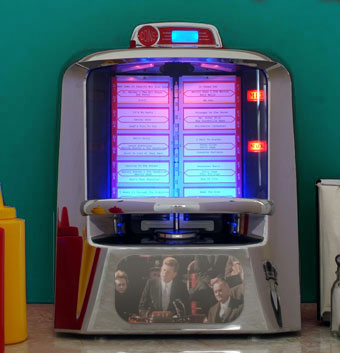 17. Dry Ice
They say this is for keeping food cold, but I'm sure there's a more popular usage that involves something illegal. 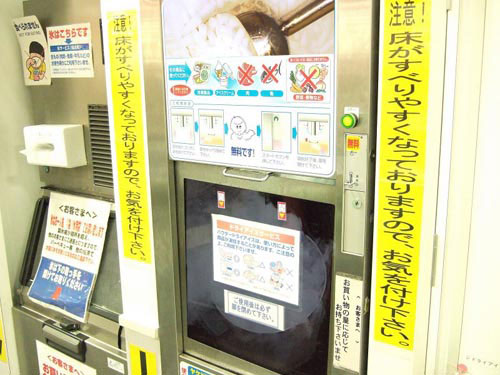 18. Wine Tasting
Sick of waiting for the product sampling guy to make his rounds? Now you can try new wines on your own schedule. 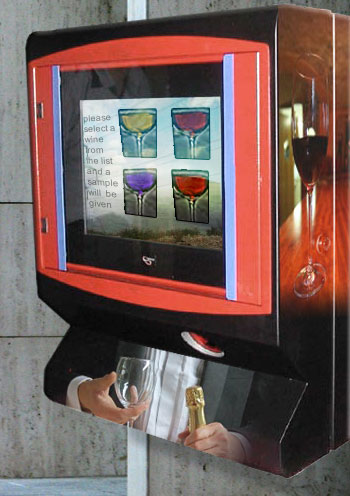 19. Hot Pizza
They claim the pizza isn't frozen, so it's more like a really fast take-out place in a box. 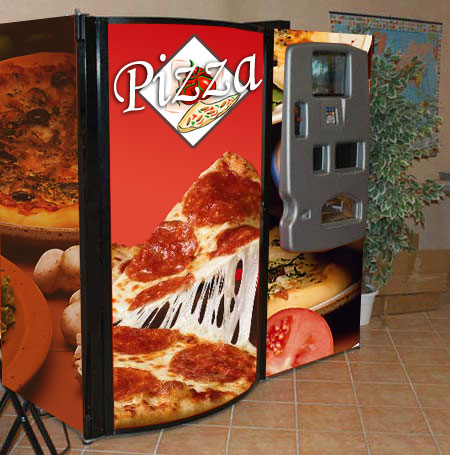 20. Light Bulbs
Maybe they even have those 60-watt soft white bulbs that nobody carries. 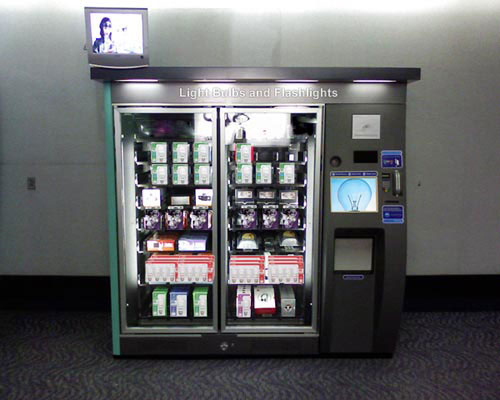 21. Church Tithing
Of course God accepts all major credit cards -- it's amazing it took Him so long. 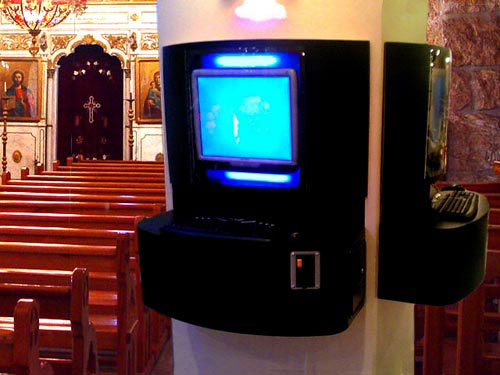 22. Quiet Time
Gotta love the simplicity: a soundproof booth that you pay for by the minute. 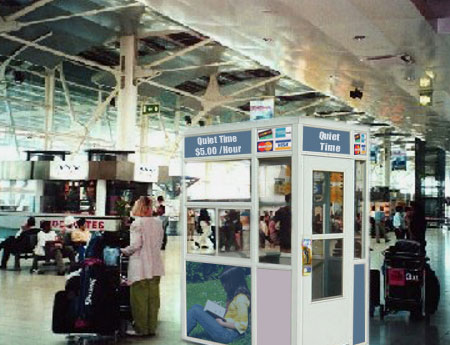 23. Pet Insects
Let's assume that kids like to buy live insects. So, how does the machine keep them alive until they're sold? 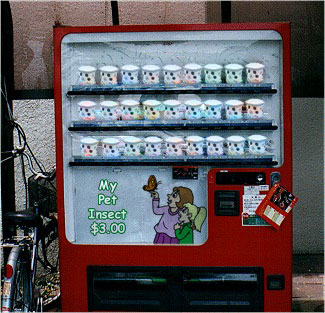 24. Kites
Kite sales? The better approach would be kite rentals. (Side note: getting hit in the head with a kite hurts. A lot. Don't ever try it.) 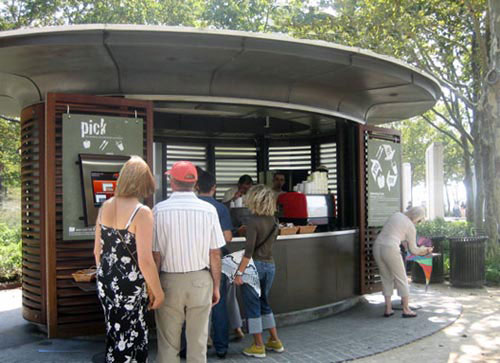 25. Hallucination
Step into the chamber, and it immerses you in otherworldly sights and sounds. 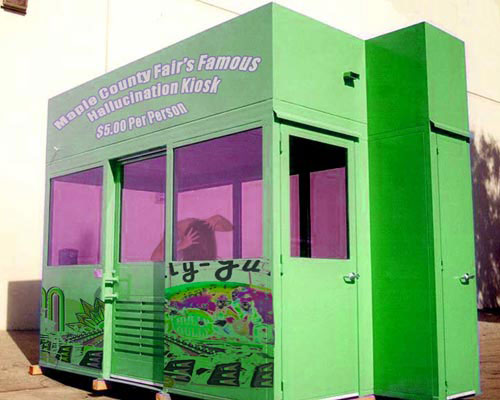 26. Armageddon Prep Kits
Everything you need for the impending zombie apocalypse. 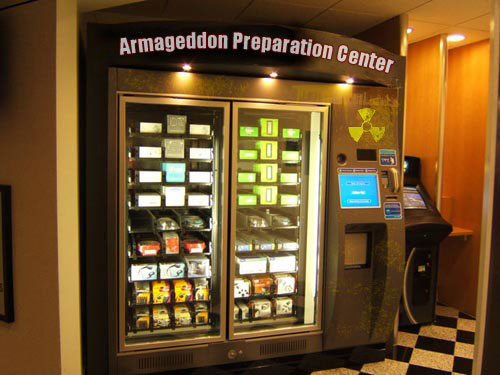 
Which of the real ones is the most surprising? Should somebody start making a few of the fake ones? Which vending machine would you like to have near your house?

+2 # nicole 2008-08-19 21:13
they should have a pantyhose vending machine, there are so many choices its always impossible to find what you want. just have it ask you a bunch of questions then it spits out the ones you picked.
0 # Jeremy Zaretzky 2008-08-19 23:11
Nicole, That's a good idea: pantyhose come in pretty small packages, so you could fit a lot of them into a self-service kiosk. Maybe the manufacturer could make a special version of the machine for the Japanese market, which would sell used pantyhose at a premium price. Actually, they banned the sale of used undergarments there a while back, despite surprisingly high demand for such things :) -Jeremy
-1 # Nyte 2008-08-20 13:11
Actually, the toilet paper thing makes more sense then at first glance. It's in Japan...a lot of toilets are equipped with bidets which get you clean without the need for paper...it's just us westerners that need to waste trees to feel comfortable after using the toilet... That said...I would be shelling out my 100 yen, I'm sure of that.
0 # Jeremy Zaretzky 2008-08-20 13:41
Hi Nyte. Thanks for the info -- the bidet-vs-toilet-paper thing makes sense. While we're on the topic of bathroom commerce, I've heard some funny stories about pay-per-use toilets in Europe. Maybe those would be a good fit for a kiosk payment system as well. Jeremy
0 # cattline 2008-08-21 08:10
#3, the flight insurance thing is completely fake thats pen station im there everyday.
0 # Jeremy Zaretzky 2008-08-21 11:46
Cattline, We didn't want the pictures to give away which machines are real and which ones are made up, so we created all the images specifically for this article -- even for the ones that are based on real systems. You can read about the flight insurance kiosks on this page: http://www.photomann.com/japan/machines/ As you said, that type of kiosk doesn't really exist in Penn Station. I've yet to hear of anyone selling train rider's insurance :) Jeremy
+2 # merritt 2008-08-30 22:16
Jeremy, I am old enough to remember pay toilets. All or most gone in US now. May have been a law or something. Didn't cost much but if you didn't have a dime, well, cost wasn't the issue anymore was it? I stayed at a camp ground once that had a pay shower. 10 cents a minute. Lotta smelly folks that weekend.
0 # Jeremy Zaretzky 2008-09-02 13:16
Hi Merritt. Thanks for the info. I believe that truck stops and some other specific venues in the US still have pay-per-use toilets, showers, and other services. But as you said, they're pretty much gone from mainstream society. Jeremy
+2 # Colin Morris 2008-10-22 09:32
#4: real, but not in that form. tinyurl.com/6mpzsa
+2 # Jeremy Zaretzky 2008-10-22 14:06
Thanks Colin. That article presents an interesting variation on the breathalyzer system, as you said. My favorite part: "So far, the machine has been extremely popular as patrons think it's fun to test themselves."
+1 # John Reitmeier 2009-04-27 14:47
I guess you've never been to the MSP airport there were flight insurance machines there for years. ALSO there were little rooms that you could rent for "quiet time" that had a single bed, wash basin, little office space, even dial up internet (hey it was a few years ago) I used them one time when I was dog tired and had a flight delay. It was 99% soundproof.
+3 # Freya Spielberg 2016-11-03 22:46
Hi, I need a recommendation for a cost-effective vending machine/kiosk that can deliver meds, health equipment and health products.
Refresh comments list
RSS feed for comments to this post
JComments