Dave Haynes, the DailyDOOH crew, and others have given a good deal of attention to the 2013 ISA International Sign Expo that was held in Las Vegas last week. As the world's largest show about signage, I'm actually a little surprised that there hasn't been more talk about it in our industry in the past. However, since the people who exhibit at that show have traditionally sold things like vinyl wraps or very large, expensive inkjet printers, most of us haven't spent much time focusing on it. This year, that seemed to change a bit, though to be honest, I'm not quite sure why.

On the surface, the idea of a digital signage vendor exhibiting at the Sign Expo makes perfect sense. After all, you'd be in a huge pavilion full of throngs of people already well-versed in selling signage. They'd be ripe prospects for converting to digital, right? Right? 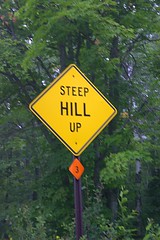 This is perhaps the easiest challenge to see and understand. Traditional sign guys have real skills, whether they're painting pinstripes, brushing vinyl, or dangling from a cherry picker while hanging a new storefront sign. What many of them still lack, though, is a comfort level with technology. Consequently, a lot of us in the digital signage space have tried over the years to come up with solutions to make the tech side of our business more accessible, whether that means writing braindead-simple software, bundling in easy content creation capabilities, or offering integrated bundles that negate the need to buy screens, media players, etc. separately.

Still, for many, it's a problem. But it's not the problem...

By now you've probably figured out how I feel about digital signage content. It's the single most important element of any network, bar none. So traditional signage guys, who for decades have focused on nothing but the execution of great signage content, should be able to easily transfer their expertise to the digital world, right?

Maybe, but maybe not. While plenty can use Photoshop or Illustrator to make great artwork, few have experience with motion graphics, and fewer still understand the nuances of making effective content for digital screens. Since most of these guys have been involved in selling signage content (since what are most static signs other than just a display of their content?), they're not going to be willing to outsource this element to production companies. And since many actually make money on content sales now, it's not like they'd want to. Which leads us to problem #3...

Our industry's full of creative business people. So it's fair to presume that we can fix problems numbers one and two. Number three, however, is a tougher nut to crack. And the reason stems from my comments on content above. A traditional signage shop that specializes in, say, laminated four-color signs understands a cost structure that is dramatically different from what we in the digital industry know. These folks have to make a big, big capex to get their business started, by purchasing a four-color press or large-format inkjet printer. Once that's done, the cost of producing additional signs is quite low. Ink, paper, substrates and coatings make up only a small fraction of the cost of the finished sign, making each individual sign an extremely high margin item for the shop.

Indeed, in our experience, most small sign shop owners were unhappy with anything less than 65% or 70% gross margins on their sales. And what's more, to many this percentage was actually more important than the actual dollar amount. This makes selling a digital signage package tough, since the packages have to be very cheap to begin with in order to make the final sale price reasonable. Coupled with ongoing training (which many franchise companies require for franchisees), technical support and the like, that doesn't leave much for the hardware and software vendors putting the packages together. Software or content subscription services can alleviate this, but they can be a tough sell to a group not accustomed to service-oriented products. Finally, considering that digital signs are still pretty expensive on a per-square-foot basis compared to most kinds of static signage, many traditional sign shops are only going to encounter a limited number of deals where they make sense.

So when you combine a low volume proposition with limited desire to sell (due to lower-than-usual gross margins), a different content business model and the additional complexity of a digital system, you can see that penetrating the static signage industry is not quite as straightforward as it first seems.

All that said, I expect that some portion of static signage vendors will become successful digital signage salespeople. After all, they still have access to the one resource that matters: customers who need signs. But if I had to guess, it's still going to be several more years before even the largest franchise organizations have any kind of meaningful deal flow when it comes to signage of the digital variety.