I don't know why so many of the titles for my blog articles are written in the form of a question. I know it's a horrible Internet cliche, but sometimes I just can't help myself. Anyhow, the reason I ask the above question is because a couple of years ago, as the economy really started to sputter, we wrote an article about digital signage "safe havens". While nothing is truly safe (in our industry or any other), we tried to identify areas that might be a little more immune to poor economic conditions than others. Since then, the economy has improved some, and we've learned a few new things about the business side of digital signage. More importantly, people have been coming out of the woodwork asking whether they should dive into the product/services/network end of the digital signage industry. I started to wonder about that myself, and came to the conclusion that while there are still a lot of good opportunities to pursue in the digital signage space, there are certain places where we as an industry have already missed the boat.

Looking back, how did our predictions fare?

Back in 2008, we identified four areas where we thought digital signage networks could continue to grow despite the near-universal instinct of every company to pull back, dig in and hunker down. Specifically, we suggested looking at: 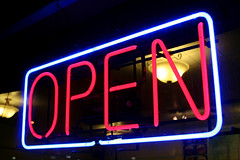 Image credit: John Martinez Pavliga on Flickr
Small networks. At the time we said, "We've seen strong and accelerating growth for networks with less than 25 unique channels of content (typically spanning less than 25 venues), and we expect this trend to continue well into the future. VARs like them because they have a lot of clients that fit that profile. Angel investors like them because they can fully fund them out of pocket. And entrepreneurs like them because they're manageable with a small team, for less money. And heck, there are just a lot of places where you can put 25 or fewer screens, period." This prediction has definitely held true from my perspective, and small networks continue to get funded (usually internally) and deployed. The one exception is probably small-scale advertising networks, which never made a whole lot of sense to me to begin with (though there are exceptions). This is probably because, as we've started to muse, DOOH networks need front-loaded scale to survive.

New screens on existing properties. At the time we said, "[We're] seeing a lot of opportunities to attach digital signs to existing real-world properties like ATMs, kiosks and even heart defibrillators. This makes sense, since all of those things require similar infrastructure to digital signs (i.e. power, Internet connectivity, etc.), and their owners are now looking for more ways to generate revenue from their existing investment." Today the "Internet of things" is bigger and more interconnected than ever, but M2M and digital signage are anything but merged. The natural progression of things seems to suggest that one day digital signage management and M2M device management should be the same, but we're not there yet. It also doesn't help that M2M deployments tend to be very large and very, very cost-conscious.

Non-retail networks. At the time we said, "Retailers may lose their taste for spending money after the [2008 holiday season] if sales aren't good (and they're not looking too great right now). But growth in other sectors -- particularly health care and corporate communications -- remains strong." I think even just 4 years ago, most retail networks were heavily advertising-funded. Today that's not really true anymore. While there are still plenty of examples of retail screens used for advertising purposes, many more have been deployed for merchandising and general purpose messaging.

Where have we missed the boat?

One thing that has changed A LOT since 2008 is the emergence of smartphones. Today about 50% of mobile phone users own smartphones, many of which have as much processing power and as many pixels as a typical digital sign. Unlike a digital sign, though, the smartphone owner is able to decide exactly what they want to see, what kind of media they want to consume, and when and how they should be exposed to it. Consequently, networks that depended on a lot of "ancillary" engagement without offering much additional benefit are finding themselves more or less out of an audience. Bar and restaurant networks, waiting room networks and public space networks have all felt this pinch. And while some have taken steps to add relevancy through shared social games and the like, many have already succumbed to the "fourth screen." All I know is that if I were asked to fund a digital signage network in a public space, my first question would be "so what's the social angle?" That would probably be my second and third questions as well.

Well, the good news is, advertisers really like having total control over their media, so the ability to precisely manage exactly what shows up on digital signage networks is still going in our favor. Unfortunately, they also like it when people actually look at the aforementioned media, so digital signs will no doubt suffer some smartphone envy. To me, the play going forward will be pushing solutions where digital signs can be used to enhance a viewer's experience, even if they're using their smartphone. This might be through some kind of interactive content that provides some social context or even the ability to unlock additional access, features or promotions (based on the type of location). For example, imagine using your phone to interact with the pre-roll loop at a movie theater so that you and your friends in the audience could vote on the content you wanted to see.

From a network perspective, we'll still walk the line between broadcast and "true" 1:1 narrowcast. But with clever programming, we can also serve as a bridge between the two, and maybe give advertisers the best of both worlds in the process.

Has the digital signage industry done a good job at spotting and pursuing new market opportunities, or have we missed out on some obvious uses for our products? Leave a comment and let us know what you think.

Eventually we will have an "opt-in" option in which we will pay our customers ad revenue for giving up screen real estate.

We will keep you up to date on our progress :)