A couple of weeks ago, one-time dotcom darling and current Microsoft subsidiary Razorfish released their 2009 Digital Outlook Report covering all things digital media, from web portals to Internet video to digital out-of-home offerings. Obviously, it was that last part that I was most interested in reading about. After perusing the document a few times, I was fortunate enough to work my way into a phone call with the agency's head honcho of digital out-of-home, Patrick Moorhead. If you've ever wondered what some of the big agencies really think about our industry, you may find his thoughts and observations most illuminating.

Digital experiences aren't the same as digital advertising, and vice-versa

Right off the bat we got into an interesting conversation due to a quirk of vocabulary. Our industry (which I think has more jargon per dollar of revenue than anybody else, even the government) decided to embrace not one, not two, but about a dozen different words for "digital signage." Much like the fabled tale of the 500 Inuit words for snow (which is crap, by the way), my "digital signs" to you might be "electronic signs" which to your friend might be "digital media networks" which to his pal might be "DOOH." So when I asked Moorhead about client requests for digital out of home media, he interpreted it as digital out of home advertising, which I would have classified as just a subset of the former term. Once we got our language straightened out, he confirmed that yes, most clients were looking at ways to extend the digital experience through the innovative use of digital technologies outside of the home. But in the same breath, he added that most clients were not interested in additional digital out of home advertising activities (namely, putting their big-brand ads on digital signage networks). We quickly settled into a jargon of digital merchandising and experience-centric networks versus digital OOH advertising networks (a distinction I've brought up myself in past blog articles). 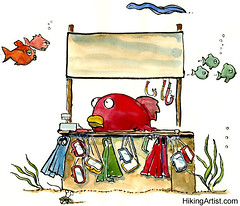 Image credit: HikingArtist.com
The central theme of this discussion was that brands should have the wherewithal to figure out what should happen next -- and what the customer expects -- at each stage of a shopping trip. Moorhead indicated that Razorfish's retail clients have been working on projects that create digital experiences that span across multiple digital touch points. Their ultimate goal is to anticipate a customer's needs as he travels through a bricks-and-mortar environment, just as his needs might be anticipated and streamlined on a website. From opening the automatic doors to digitally highlighting targeted deals to letting a customer check out without ever getting on a line, Razorfish's clients want technologies that can exceed a customer's expectations for what a retailer can do each time he enters the store.

According to Moorhead (and as much as we'd like to think otherwise), Razorfish has not had a significant number of clients ask for their help with advertising on digital signage networks. He attributes part of it to lack of awareness, and if I had to guess, many of the folks in charge of advertising for big, national brands still consider digital signage to be somebody else's domain, not theirs. He also indicated, as we've heard many times before, that the lack of a unified inventory system and purchase process is probably preventing some of the brands that would advertise from actually doing so. Remember, big brands are used to sitting down for just a few hours and buying up millions of dollars in ad inventory. To many, it's simply not practical to spend ten times as long for only a tiny fraction of that spend. Yes, I recognize that this logic leaves out the value of the medium, but that's how many buyers think.

Additionally, the pricing of digital signage inventory could be at an all-time low right now, since the relatively few brands and agencies that currently use it have "uncluttered" access. As any Econ 101 textbook will tell you, the combination of over-supply and under-demand is brutal on inventory pricing. So even though more screens are being lit up every day, it's reasonable to guess that demand for screen time will increase at an even faster rate, increasing competition for the resource, and thus driving up its price over time. Of course, there's a ceiling on how high that price can get before the medium loses its appeal. But until there's more brand research on how effective digital out-of-home advertising is (in its many incarnations), it's basically impossible to say what buyers will eventually be willing to pay.

On the future of creative assets

Another thing struck me as odd while reading through Razorfish's Digital Outlook Report. Namely, they said that another significant hindrance to our industry was the lack of ready-to-use assets. I know that we have a long way to go before the content on your typical mom-and-pop digital sign is as optimal as can be. But for the larger out-of-home networks, I basically thought content was a solved problem -- it had to be built from scratch, sure, but at a relatively low cost, especially when amortized over a large number of screens and a reasonable period of time. Thankfully, Moorhead was able to clarify Razorfish's position on this issue. While it's generally understood (thank goodness) that one simply can't repurpose stock content -- a TV commercial, for example -- agencies would really like to find a way to give their content some additional smarts that would let the components of an asset reorganize themselves based on their target medium. However, I don't think anybody expects that a TV commercial will know how to automatically reformat itself into an in-store TV ad anytime in the near future. (If that level of self-awareness did exist, surely the armies of our new robot overlords would be on the march before long.)

Razorfish occupies a somewhat unique position in the agency world. They're bigger than the small guys, but are owned by a tech company (Microsoft), rather than one of the "big three" advertising conglomerates. Likewise, they started out with a purely digital focus, but are now taking on more of the responsibilities of a traditional agency. Sure enough, their strong roots in technology and recent forays into traditional media are mirrored in the ways they participate in the digital out-of-home space. Technically strong, their business in experiential media -- advanced merchandising, digital in-store experience enhancement and the like -- is brisk. However, when it comes to applying a traditional ad sales model to a new medium like DOOH advertising, they find that their own customers just aren't asking for it.

What can digital signage folks learn from this?

First, it's clear that we have a vocab problem. When two people can say the same words and mean different things, there's a real issue there. I don't know how we want to fix this one, but it seems like it ought to be entirely within our power as an industry to do so. Second, while the process of buying digital signage inventory is getting easier, it's not quite there yet. I know a lot of people are working hard on this: SeeSaw, Adcentricity, bookingDOOH and newcomers like AdSemble, to name a few. Moorhead even mentioned SeeSaw as an example of a step in the right direction. But clearly we're not there yet in agencies' eyes. Finally, we need to standardize. I don't think the magical morphing creative asset lies in our near future, so we as an industry need to make it as simple as possible for traditional agencies and content houses to build content for our screens. That means a combination of best practices for creating digital signage content, as well as technical standards for things like content format support and interchange formats. Again, this is a work in progress (which I need to do a blog article on, just to get everyone up to speed), but there's a long way to go until it's over and done with.

Should our industry do more to highlight the differences between digital out-of-home "experiences" and advertising? If so, how do we do it?