It's been a very busy two weeks here at HQ, since we've been preparing for the release of FireCast Digital Signage EasyStart, our first truly new product in nearly seven years. As evidenced by the dearth of posts on all our blogs, I've been swamped by a ridiculous number of last-minute details and decisions concerning everything from our MSRP ($1350) to the type of label to use for product activation keys (plain ol' paper won out over my favorite: holographic foil). But I wanted to get at least one article out this week, since after five years of doing this, I start to feel a nagging sensation when the blog goes un-updated for long periods of time. So in the tradition of the great Signal vs. Noise blog (authored by 37signals, a company whose mantra of simplicity has earned them something like 3,000,000 users), I thought I'd take a few minutes to explain some of the decision making that goes on behind-the-scenes at your average, workaday digital signage software company.

This is not an ad. Seriously, after years of writing this blog I hope you'd have a little faith in me :) That having been said, if you have absolutely no desire whatsoever to listen to anything to do with my company, just stop reading. I mean it. Don't worry, I won't be offended. And next week we'll get right back into digital signage screen placement research, I promise.

OK, so the rest of you are going to stick with me for a bit. After reading this article, I believe you'll think twice before you call up your software vendor to yell at them. "Maybe...," you'll think, "...that mauve on fuscia color palette the software uses is designed to streamline my workflow." Of course, even if you did think that, you'd still snap right out of it, place your call and let your vendor have it, I'm sure.

A new product? What on earth were we thinking? 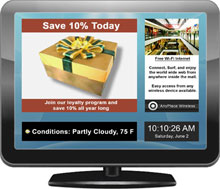 Although the screens may look the same,
small projects are a different animal.
Geez. I ask myself this question two or three times a day. But about 18 months ago, we started noticing a trend. While large deals of say 50 or more screens took forever to close -- 18 to 24 months is not uncommon, as anybody in the digital signage software business will tell you -- smaller deals of 10-20 units would often close quite quickly. This is good, since revenue from those smaller deals evens out the cash flow between periods when you're closing bigger deals.

On the other hand, while many of those guys in the 10-20 range thought they'd expand to hundreds or thousands of screens (one guy a while back even said "millions"), history and mathematics indicated that only a very few ever would. So we were left with a problem. Our software had to have all of these complex, sophisticated features and scalability for thousands upon thousands of screens for our big clients, but still needed to be simple enough for the smaller clients who were (and are) our bread-and-butter to use and enjoy. Needless to say, this caused many heated debates between myself and our software design team.

Our ultimate solution (as much as anything can be an "ultimate" solution in the software world) was a compromise: we'd continue to put effort into simplifying our enterprise-level software as a service (SaaS) platform, while still retaining all of its powerful features. But we'd also create a new product, aimed squarely at the smaller guys. We estimated that it would take six to nine months and cost around a half million dollars to get version 1.0 out the door.

We knew our focus for this new product would be simplicity, but there was debate over what that meant. No multi-zone support? No network support? No interactivity? Those all seemed like pretty vital features, so they couldn't be left out, even though our support history showed that those three areas created the greatest number of support requests. But because our enterprise product was (and is) web-based, we realized that our server logs had a perfectly good record of exactly which features our customers had been using the most for the past seven or eight years. Suddenly, multi-zone support could be streamlined because 90% of our small clients were using fairly simple layouts. The look-and-feel of our network configuration tools changed as the emphasis shifted from "configure 1,000 players as fast as you can" to "help the average Joe configure his five players, at a pace he's comfortable with."

And so we went down the list. Over time, we realized that most of our customers were only using 25-30% of the features in our SaaS product. Those 25-30% became the base for the new product, which we decided to call EasyStart (it's easy, get it?). We went back to our pool of common feature requests to fill out our feature set, adding in things like real-time screen previews (impossible due to bandwidth constraints for most of our large customers with huge networks), easier file uploading and importing, and more built-in training videos and tutorials.

Unfortunately, all of this "simplicity" turned out to be pretty complex on the back-end. Our timelines and budgets both ballooned as we realized what a significant break EasyStart would be from our enterprise software applications.

You don't get a second chance to make a first impression

After 16 months and (embarrassingly large amount redacted) dollars, we were finally satisfied that our new creation was something that even our brethren at 37signals would agree is "simple." And by simple, I mean easy-to-use and understand, and not necessarily feature-deprived, which is always the nagging concern. But ultimately that won't be something for us to decide anyway. The free market -- whether you love it or hate it these days -- dictates that our prospective customers will tell us whether we hit the right combination of features and ease-of-use.

Competition in our industry is tough, and there are many companies out there with products that run the gamut from utter crap to really-freaking-awesome. Hopefully the market will decide that we're closer to the latter than the former.

So what do you think, did this article read like an ad? Go ahead, call me on it if you think so. But if you feel that way, please leave a comment and let me know how I could have made it more useful to you.

0 # Lucky 2009-04-10 16:09
It did not read like an ad, in fact it was very interesting read. This was a tough call and I applaud and respect you for taking this calculated risk. I hope allocating large amount of money for development of this solution will pay off. ITMm sure you guys will sell thousands of these players , my only concern is about support. Is your support team ready to answer 100s of callers who might not still understand how this works and need their help? This could get very costly in the long run, how do you plan to overcome that?
-1 # Bill Gerba 2009-04-11 17:56
Hi Lucky, Thanks for the feedback. To your question of whether we're prepared to support EasyStart - that was certainly the #1 question on our minds while building it out. We still don't know the answer (though of course we'll do whatever it takes), but we think we've done the best we can to virtually eliminate the major points of support that have come up during 7 or 8 years of deploying enterprise digital signage. Along with the networking, multi-zone layouts and interactivity issues that I mentioned above, things like configuring screens (picking a resolution, etc.), understanding the benefits of various media formats and remote troubleshooting round out our list of top support issues, so you can believe that where we've spent the majority of our time in EasyStart development.
-1 # manolo almagro 2009-04-12 22:09
well done wirespring! There truly is an underserved niche that you'll most likely dominate considering what I've seen of the product. Listening to the market wants is always a good strategy. But beware - not far behind are your competitor's who will quickly follow your lead with their own versions. - double kudos to you that you follow 37signals blog.
+1 # Bill Gerba 2009-04-18 13:30
Manolo, sage amongst sages, thank you for gracing my blog with your presence :) It always feels like the competition is breathing down our necks -- there **are** 300 of them, after all -- so rest assured that we're not resting on our laurels just because version 1.0 made it out the door!
Refresh comments list
RSS feed for comments to this post
JComments