Legendary bank robber Slick Willie Sutton is probably better known for a clever quote than his lengthy criminal record. When asked why he robbed banks, Willie answered "Because that's where the money is." With a slight twist, we might apply Willie's wisdom to the digital out-of-home (DOOH) world and pose the question: Do advertising agencies think DOOH is where the audience (money) is? And the logical follow-up: how important is it to the long-term growth of the industry that the agencies jump on board?

Nearly five years ago, as a wide-eyed attendee at my first DS show, I heard this same question asked over and over. The response was always the same: "Unless the agencies get involved," one DS veteran told me, "this business is going nowhere." At that show, you could have fired the proverbial shotgun, repeatedly, on the trade show floor without hitting an agency person (though hardware and software sales teams would have suffered heavy casualties). Now, five years later, the scene has changed but the song remains the same. The question is as topical, and top-of-mind, as ever.

How important is agency involvement? 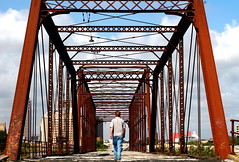 Image credit: Stephanie Carter
"It is critical," says Virginia Cargill, President of CBS Outernet, one of the largest DOOH networks. During my interviews with industry leaders I decided to play devil's advocate: "What if the agencies don't increase their involvement beyond the current level?" I'd ask. But none of the industry experts I spoke with took the bait. Rob Gorrie, President of Adcentricity (one of the top DOOH buying/planning/strategy groups) voiced the typical response: "The agencies are getting more involved and I think that will continue. But media is a wacky world." Wacky, complicated and lacking clear direction.

If you were to judge the market's health solely by the daily industry headlines, you might expect to see an agency stampede toward digital signage and DOOH. In just the past few weeks, Ad Age has declared a "Boon for Billboards" as DOOH is one of the few media "experiencing real growth." And ADWEEK weighed in on the fast growth of retail media, claiming that "retail has become a big media buy." It is worthy to note that there's significant research behind both articles.

So as Bill Murray might say, "We got that goin' for us, which is nice."

But that's the view from 30,000 feet. Dive down into the trenches today, and you'll hear a different story. Agency buyers and planners are clamoring for reach, frequency and measurement. DOOH executives counter by asking for more focus and energy from their agency counterparts. The frustration on both sides is palpable. "At the agencies, the out-of-home people understand the space but don't have the money," says Cargill. "The network people have the money but don't understand the space." The importance of measurement can't be overstated. DOOH business managers admit that they're struggling to provide it in a form palatable to the agencies. "What I hear a lot," Gorrie says, "is 'prove to me that the audience you say you are giving to me you are actually giving to me'."

Sensing little urgency to invest in DOOH, many agencies continue the legacy of buying TV, especially since large chunks of network time are drastically discounted due to economic conditions. But those old habits don't sit well with Ashley Swartz, a former VP at media firm PHD, and now the CEO of Ag8, a boutique "trans media" shop in London. Swartz knows whereof she speaks. And she doesn't mince words: "The agencies are lazy," claims Swartz. "One of the biggest challenges [DOOH] will face is that people will never get fired for buying a 30-second spot." Thus the onus is on the DOOH industry, Swartz believes, to make the process more user-friendly through standardization of the buy and (here it comes again) improved measurement.

Retail digital signage, unlike purely ad-driven networks, feature a mixture of marketing, branding and product content married together. So that sector of the industry faces a combination of the agency-related ills and some problems all of its own. Fortunately, there are some experts guiding the way in that sector, like one Laura Davis-Taylor. If they ever build a digital signage hall-of-fame, Laura will surely be one of the first inductees. Coming from an agency background, Laura has been working the retail digital signage beat tirelessly for years. Ask her about the relationship between retail DS and the agencies and she'll tell you it's still very much a work in progress. One big stumbling block, Laura believes, is the lack of knowledge about the space. "The agencies know broadcast but they don't know retail," she says. "You don't learn retail unless you live it, and they've shown little desire to do that."

Another player in the retail digital signage game is Paul Flanigan. Flanigan produces the Best Buy in-store network, which touches virtually every aspect of the chain's operations, including collaborating (or cajoling) with multiple agencies on creative and content. Flanigan sings the praises of Crispin Porter + Bogusky, an agency that he says has become a great partner. Crispin made the effort to learn what works and what flops on retail screens, and has produced content specifically for Best Buy's in-store network rather than re-purposing existing broadcast content. That is a revelation unto itself, and, according to Flanigan, still the exception to the rule. "I have seen, first-hand, major agencies balk at wanting to engage in this space," Flanigan says. "They don't get it and they don't care." On more than one occasion, Flanigan says Best Buy's suppliers, the major electronics manufacturers, have gone around their agencies and requested that his in-house team produce content promoting everything from computers to cameras on Best Buy's in-store TV network.

Well Paul, I met Peter, your German brother-in-arms. While working as Germany CIO for Daimler, the car and truck behemoth, Peter Muller-Bruhl created a digital signage network in Mercedes-Benz dealerships throughout the country. He then moved on to a venture capital firm investing in the digital signage space. Now, he is at fischerAppelt tv media, a division of a large German ad agency. His primary responsibility: digital signage business development. "Is there anyone else working at a German ad agency devoted solely to digital signage?" I asked him. "I am one of two in all of Germany," Muller-Bruhl replied. "And it's not much different throughout Europe." An admitted DOOH evangelist, Muller-Bruhl doesn't worry that the agencies will fail to engage our medium. He predicts they will increase their involvement out of necessity. "Their clients will force them to jump on the bandwagon," Muller-Bruhl believes. "The agencies will claim to understand DS but will go for a quick fix using their existing resources. It will blow up and the clients will think DS doesn't work. The agencies will eventually develop specific expertise. But in the meantime, I'm afraid we'll see bad DS execution from the agencies."

But enough with the agency bashing and teeth gnashing!

Cutting through the emotion with a straightforward analysis is Jeremy Lockhorn, the director of emerging media and video innovation at Avenue A/Razorfish. Lockhorn would love to see our medium take off, but says that digital signage and DOOH is currently battling a double whammy: a terrible economy combined with too much supply and not enough demand. "The unfortunate reality for the industry," according to Lockhorn, "is the growth rate of inventory is grossly out pacing the growth rate of ad spend."

What's the conclusion? Our business has certainly come a long way. But we still have a long way to go. As Cargill says, "consumers are as out-of-home as ever," but capturing their attention, and monetizing that experience, remains a challenge for the industry. And the agencies? Well, they have their hands full trying to figure out mobile, social networking, online video, and the changing landscape of broadcast. Add DOOH to the mix and it's little wonder the agency folks gloss over whenever we start trying to engage them. We're working in a new channel. And with new channels, it takes time for everything to fall into place. Nonetheless, there is progress. There is energy. There is talent focused on this space as never before. "There is a recognition," according to Gorrie, "that this could be where the money is."

If Slick Willie Sutton was alive today, and planning his next job, he might take a long look at DOOH. No reason for him to look at a bank... there's no money there anymore.