After coaxing my five-month-old back to sleep a few nights ago, I found myself surprisingly awake. I tossed and turned for a few minutes, and then went into the living room to look over my very dusty DVD collection. (Aforementioned five-month-old + day job at WireSpring = very little free time these days.) If I couldn't sleep, I could at least vegetate in front of the TV, and what better way to do it than by watching some 80's movies? I popped in a perennial favorite -- Ghostbusters -- and hit play. By the end of the film, I was surprised by two things. First, I was still awake. Second, Ghostbusters actually has a lot to say about smart marketing practices. In my mind, I was relating things back to our series on creating great digital signage content. But the more I thought about it, the more I realized that Ghostbusters can teach every marketer a lesson or two.

In an effort to drum up business, the Ghostbusters decide to air some low-budget ads on network TV. Each commercial ends with Venkman, Stantz, and Spengler telling viewers to call a number on the screen. After seeing a few of the commercials, Dana Barrett picks up the phone to call them, earning the Ghostbusters their most important client. It's classic direct-response marketing from glory days of paid programming -- you know, before every DR commercial had the impossibly annoying Billy Mayes screaming at the audience to Call now, supplies are limited! Despite the negative stigma these ads might have (many "reputable" agencies won't even make them), TV commercials with a call to action tend to perform very well according to recent viewer data from TiVo. Needless to say, when your content is running inside a store (or somewhere else where a sale can be made), that call to action is even more important -- and even more effective. 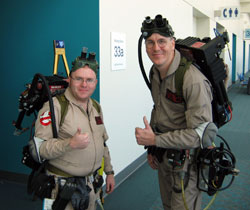 Not actual Ghostbusters. Image credit: Gamerscore Blog
Do you think that anybody who hadn't seen a ghost would take our heroes seriously? Not a chance. But after a few nights with a noisy poltergeist, they'd probably have a more open mind about the Ghostbusters' advertised services. Every time they caught a ghost, the press was all over it, helping circulate pictures of smoking traps and happy customers throughout Manhattan. In marketing speak, some like to say that "perception is reality". Simply put, viewers are always looking for reasons to discount any claims that you make, because your perspective isn't neutral. Consequently, an honest illustration of the product or service you're offering, complete with a demonstration and testimonials, can be very powerful. If you can get a neutral third party to spread the word for you, all the better.

Why didn't the Ghostbusters have more competition in the spirit removal and containment business? I mean, they must have been around for at least a few months before the final showdown with the Stay Puft Marshmallow Man, right? Perhaps they were geniuses who had a better understanding of the spiritual and technical worlds than anyone else. But I prefer to believe that it was because of their first-mover advantage. Once established in the marketplace, the Ghostbusters brand simply became synonymous with the services offered -- they became the Kleenex of the ghost-busting world. And if you don't think that such an advantage exists in the marketing field anymore, I'll point out that some bar owners are now asking specifically for "Ecast" interactive jukeboxes, while big retailers like Walgreens have been clamoring to install "Redbox" DVD rental kiosks. Even if these companies weren't the first to offer that product, they were the first to build a recognized brand that became synonymous with it. 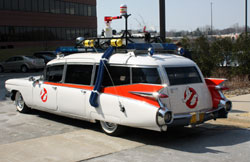 Branding on the Ecto-1. Image credit: Chad Davis
That first-mover advantage only works if you have a brand to promote -- and whether they knew it or not, the Ghostbusters had just that. Their cute little ghost icon was plastered on everything -- TV commercials, their car, the headquarters building and even their uniforms. When it comes to out-of-home advertising like billboards or digital signage, though, such obvious branding can sometimes hurt more than it helps. The occasional station identification message might please your CEO and investors. But interrupting programming with something like "You're watching MedTV: the Doctor's Office Network" just takes up screen time that could be used to promote products or better engage your viewing audience. Worse, if it shows up in the loop too often, it will only highlight the fact that the rest of your loop is sparse, which is probably the case if you're cycling through your own station ID message a lot. It's a balancing act for sure, but there's no doubt that a strong brand is the key to long-term viewer recognition. Heck, Ghostbusters is a make-believe company but I'll bet their logo still has tremendous brand recognition in the real-world today, nearly 25 years after the movie was released.

Whether you're capturing ectoplasmic entities or just pointing out the benefits of a new brand of toothpaste, it's always easier to sell when the customer is already in a buying mood. Of course, even customers who are open to buying will probably do so on their own schedules, so as marketers we often try to inject a sense of urgency to speed up the process. You're probably not going to be able to threaten your customers with the release of a particularly nasty Class 2 free-floating apparition (at least, I hope not). But if you're selling toothpaste, you could mention that after age 30, our gums start to recede and gingivitis becomes a bigger, faster-moving threat than ever. Just don't go overboard with the scare tactics: think education, not intimidation.

As a closing thought, be careful what you wish for. The Ghostbusters nearly destroyed half of Manhattan after getting more business than they could deal with (a misguided EPA official accidentally released thousands of captured ghosts). The moral of that experience: shoot for a controlled growth rate that you can handle.

Have you spotted any marketing gems in your favorite movies? Leave a comment and let me know!

-1 # prabhu krishnan 2008-10-17 20:53
Hey, this theory is pretty good, I didn't even notice that by just seeing a movie like Ghost Busters, one could actually come up with a marketing proposal in the Board room... Anyways excellent innovative job...
0 # Bill Gerba 2008-10-27 19:46
Hi Prabhu, Yup, inspiration and education are never more than a quick trip to the video store away :)
+1 # Anthony 2009-03-07 16:51
I have a lady who has a problem with EMF signals in her flat, Which she thinks are being produced by the person in the flat above. Do you know anyone who would have the equipment to measure and record what she is experiencing. She is willing to pay for this service, but requires recorded data.? Thank you. She lives in Bexhill on Sea East Sussex.
Refresh comments list
RSS feed for comments to this post
JComments