Tweet
Despite what some people may think, retailers are actually quite sophisticated when it comes to marketing and promotional tactics. First, they have to get you (the consumer) into the store. Then, they need to convince you to buy something. And if they're a big-box retailer or grocery chain, they have to do this thousands of times a day to make up for razor-thin margins. Because they are forced to learn so much about their customers' buying habits, retailers often have access to information and insights that their vendors don't. To capitalize on those insights, they've come up with fancy concepts like trade promotion and co-op marketing programs, which encourage vendors to hand over money that the retailer will then use to market the vendor's goods (and themselves, naturally). Walmart, the quintessential retailer, has mastered this art over the years. However, a new article in Advertising Age shows that Walmart is stepping up their game by implementing a program called the "cost-supplement initiative." Under this new strategy, Walmart isn't just going after trade promotion money -- they want a share of the funds that vendors would normally put towards consumer advertising, too. Spending advertising money on behalf of another party was once the exclusive domain of an agency, but as retailers like Walmart gain even more strength and clout, they're starting to take on some of those roles themselves.

I don't sell in Walmart, so why should I care?

At first glance, it might seem like this news has nothing to do with you. You're not Walmart or one of their major competitors. You're not one of Walmart's suppliers. About the most business you do with them is stocking up on paper towels and Sam's Choice sodas, right? Well, as goes Walmart, so goes the rest of retail, and that's what I want to focus on. You see, one of the most important paragraphs in the whole AdAge article (and it was quite a good article), was this:

To be sure, there's no evidence any major marketers have come close to meeting [Walmart's new pay-to-play] demand. If they did, they would either have to make proportionate concessions to other retailers -- essentially turning their entire marketing budgets over to the retail trade -- or risk violating the Robinson-Patman Act, which requires manufacturers to treat retailers proportionately in trade deals. (emphasis mine) 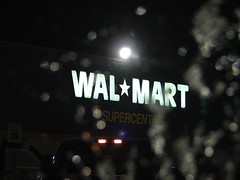 Image credit: Monochrome
Putting aside the ridiculous implications of the ancient and very Atlas Shrugged-esque Robinson-Patman Act, product marketers and retailers have been trading blows over advertising since time immemorial. So the basic gist of Walmart's plan is nothing new. What's new and different is the sheer scale of the thing, which could put literally billions of advertising dollars in the hands of the retail giant, effectively turning them into one of the biggest advertising agencies in the world. Should that come to pass, the key prediction of the big POPAI/Saatchi & Saatchi X study on private label brands from back in 2007 would come true: the channel, not the brand manager, would control the brand.

It doesn't seem too unnatural for the channel -- the means by which a product is sold -- to necessarily have some impact on how that product is sold. However, some shopper marketing firms, retailers and digital signage network pundits prefer to push this concept to the extremes, declaring that the retail "channel" will soon be a medium into and of itself. I've never understood this, since a retailer's primary goal will always be to sell product, and any attempt to sell media "space" separately from the product would likely cause conflicts between these goals. Leon Nicholas, director of retail insights at WPP consulting firm Management Ventures, cleared up a lot of that potential confusion by declaring the retailer might be an agency, not a channel. That makes a lot more sense to me: in addition to preferred slotting and endcap allowances, retail venues have the ability to dole out brand access to a huge number of other "media" like posters, POP displays, shelf talkers, digital signs, in-store audio programs, circulars, and who knows what else. And even small mom-and-pops and modest store chains advertise on external media like TV, print, radio and the Internet. If a new form of trade promotion requires product manufacturers to "pay to play," and that money isn't going directly into the retailer's coffers (which it certainly shouldn't), then suddenly the retailer does start to look very much like an agency, deciding where to spend marketing dollars, which media to invest in, and which venues, locations and air times to secure. And if ad agencies are still having trouble understanding digital out-of-home, retailers could be in a position to attract additional ad dollars simply by virtue of understanding the retail-centric media options better than regular agencies do.

Creating agencies out of thin air

As always, Walmart is a fringe case. They basically commanded Saatchi & Saatchi X to exist, and it did. Then, when it came time to roll out the Smart Network, they once again built an ad sales agency out of thin air (Studio2). If the cost-supplement initiative really takes off (and the Robinson-Patman issue gets resolved), I could easily see the same thing happening, with a new entity formed to allocate and spend the billions of dollars pumped in via product makers. Not too long ago, Walmart said in-store media is their most important channel, so who knows how far they'll take it when someone else is footing the bill.

What's the most likely outcome here? As Walmart and others heap more trade promotion fees on their suppliers, the overall percentage of ad dollars they control could increase dramatically. This raises several questions:

Will retailers (or at least the largest of them) continue to manage the advertising funds themselves, as they have in the past? Will existing agencies step up to the plate with services tailored to these growing programs? Or, will entirely new entities be spawned for the sole purpose of handling retailer-specific spending accounts?

+1 # Dave Haynes 2009-07-22 21:17
Great insight, as always. The only point I can add is that there is Walmart, and then everybody else. What happens with the world's biggest retailer when it comes to brands and trade or media dollars does NOT necessarily extend to the rest of the retail world. Lotsa people think what happens there can be replicated on a smaller scale, but the dynamics are very different.
+1 # Bill Gerba 2009-07-22 21:27
Excellent point, Dave. As a number of people interviewed for that AdAge article noted, Walmart's actually being somewhat **less** aggressive than some other (smaller) retailers when it comes to getting vendors onboard with more significant trade promotion budgets, so while it's not quite a bottom-up event, there are smaller retailers at work at similar programs already. I personally think that retail agencies will pop up because retailers who don't necessarily have the scale to do it themselves but still want the performance benefits of such a program (and presumably can pass those benefits along to the suppliers/vendors) will need help.
0 # Kansa Bob 2009-07-23 10:33
How do you think this will effect other out of home tv networks. Will it be instore only or is it going out of the stores into other venues?
0 # Bill Gerba 2009-07-23 13:07
Well, the needs of the retail environment are somewhat unique (even compared to something like mixed-use), so I don't think there will be a 1:1 correlation between this kind of activity in retail and a similar kind of activity elsewhere. Now, that having been said, I think the writing is on the wall for those agencies who **aren't** getting involved in DOOH projects in any meaningful way. Many so-called "full service" agencies still focus the vast majority of their attention on TV, print and the Internet, but "new" alternative channels like marketing at-retail will have to occupy a much bigger place in their minds if companies like P&G are truly forced to throw down hundreds of millions -- if not billions.
0 # Laura Davis-Taylor 2009-07-25 12:35
Bill, utterly fantastic overview of the issues and your questions are very compelling (of course!) :) My hope is that this might FINALLY make the agencies take notice. But, this arm twisting 'do-it-or-else' tactic that Wal-Mart is taking here is deplorable. Seriously, they caused enough ill will when they did this with their digital signage sponsorships and now this? An obvious question is that if they are capable of doing this service better than most major agencies, then why are they forcing vendors to participate? It's not good for anyone and as I do agree that Wal-Mart is a unique retail entity, they have for years spawned copycat strategies. And, regardless of the store size, any retailer can demand a 'participate or get out of my store' ultimatum--although I shudder to think of it. As you know, I've preached to agencies for years on how critical it is understand the retail store as part of the overarching marketing plan; I still constantly bang my head on the wall over their responses. They either totally ignore it or they come into it armed with oodles of traditional media dogma and no realization (or respect for) how much is to be learned about the store before you take on marketing strategy for reaching people in it. I had one major firm say right to my face that 'there isn't enough money in it to care'. That might be about to change, eh?!!
0 # Bill Gerba 2009-07-27 18:46
Hi Laura, Thanks as always for the kind words and insightful commentary. I think that there must be some tipping point -- some amount of money, most likely -- that upon being spent will send the traditional agencies into a frenzy. Can Walmart by itself reach that point? Maybe. They're talking about hundreds of millions if not billions of dollars (assuming that the vendors play ball of course). The other critical think that Walmart brings to the table is a distinct understanding that in-store media isn't the same as traditional media. So if they have to make their own agency or in-house organization to handle such media sales, that ought to be a huge shot across the bow of old-school agencies who continue to not 'get it,' right?
0 # Laura Davis 2009-07-30 00:14
One would certainly think so Bill!!!
Refresh comments list
RSS feed for comments to this post
JComments