Small Retail Stores, Core Customers and the Future of Food

Tweet
When it comes to today's grocery stores, what's old is new again, and small is the new big. You see, many of today's supermarket chains began as small Mom and Pop groceries -- or, as in the early version of Loblaw's, "Groceterias." But the 20th century saw the number of Mom and Pop stores dwindle down as the supermarket became a mainstay of American life. Today, it's possible to get some kind of food almost anywhere you go, but the actual venues for groceries are more complex. Convenience stores inconveniently fill up strip malls and street corners, while Walmart and Target invest more space and more store brands for groceries. Even so, some lower income neighborhoods, urban downtown centers, and rural town centers exist in so-called "food deserts" that are miles away from sources of fresh produce, meat, poultry and fish. For something as parochial as grocery shopping, figuring out the right course for the future, whether big or small, is surprisingly complicated.

The trend towards small-format

For a variety of reasons, the major grocery conglomerates (Tesco, Whole Foods, Walmart, and Giant Eagle, to name a few) have been experimenting with small format stores recently. These venues are usually 15,000 square feet or less, feature high product density, and are located in urban or high-traffic areas. Price Chopper is the most recent to announce that it will open specialized smaller stores, particularly in locales where community demand is high but doesn't warrant the costs of more shelf space and bigger inventory. From Albany to India to South Africa, the small format store seems to be taking off. 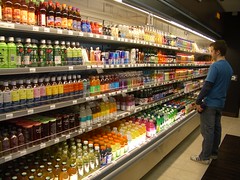 Image credit: Jess Lander
The market has room -- and need -- for both large and small outlets. Most of the news has focused on the size of the store and what these versions mean for the overall direction of retail food sales. But if you look closely, what's important here is the ability of smaller stores to attract and maintain a core customer base. Most of the people I interview on their grocery habits rely on a variety of types of food stores, from convenience marts and local shops to the big warehouse discounters. Interestingly, no matter how big or small the store, people talked about an important factor besides the over-analyzed concerns for low costs, merchandise availability, and convenience. That factor is the personalized service for which only the Mom and Pop stores were known.

Core customers -- the constituency that likes your product and regularly returns for more -- are critical to big and small chains alike. Not only do they consistently outspend their non-core peers, but they also serve as part of the marketing machine by spreading news via word-of-mouth. So it's no surprise to see them being so heavily wooed these days. Many retailers are giving out coupons and depending on the strength of loyalty cards and reward programs. Others are putting their hopes on social media, word-of-mouth and online sites that tout their product over others. While each of these strategies has its pluses and minuses, the real retail magic lies in providing what some segment of the local populace needs no matter what the economic climate. And the emphasis here is on local.

Food seems like a pretty basic and obvious necessity -- everyone needs it. The problem is that in our previous incarnation as a Land of Abundance, we produced enough food to feed our own population three times over on a daily basis. The work for marketing was not in convincing people to buy food, but to buy a specific brand, a specific item, and to buy a lot of it on a regular basis. But in the words of Bob Dylan, things have changed. The introduction of the small format grocery is not a return to Mom and Pop's Deli, but a chance for the large chains to re-establish themselves in particular niches. The ones that will be successful are those who recreate the feeling of a personal relationship between store and shopper without losing the ability to draw on a larger, adaptable inventory. Add in a healthy dose of contemporary technology (seating areas with WiFi, an in-store video network, green building design) and you have the next incarnation of the corner grocery. Ironically, for a glimpse of a format-of-the-future, we need look no further than Walmart.

Walmart? Small? Are you joking? Image credit: Les Chatfield
While Walmart generally seems to be successful by treating its customers as one indistinguishable mass driven solely by bargains, its latest small format test store reveals an ability to cater to geographically specific core customers. The retail giant's recently opened Garland, Texas location has a plethora of fresh and prepared foods appropriate for the local Latino community. There are aisles of specialty products, fresh tortillas and rolls made daily, fresh herbs in bunches, chiles of all kinds, and fresh tamarind, cassava, spices and other items widely used in the kitchens of Mexican-American families. But what's interesting here is that this is also one of the new environmentally green, energy efficient stores that Walmart has been promising. Potential PR coup aside, Walmart's push into sustainability is a calculated business move, as research suggests that segments of the Latino market are concerned with the environmental impact of giants like Walmart, and are buying organics.

While small format stores might seem like a good way for giant retailers to reconnect with shoppers, and for smaller retailers to expand on the cheap, we need to keep in mind that very little real-world research has been done on these stores in their latest incarnation. So while companies often approach the market with a focus on convenience -- the urban, time-constrained consumer who will also be attracted to in-store specials -- the core constituency is more likely to be locals who can turn the store into "their own" by finding recognizable products and brands that are suited to their cultural niche. Many small format stores promote too great a reliance on in-store brands, which may backfire unless it's demonstrated that core consumers in that area really want those products.

As a model, consider the chain restaurant (the donut or bagel shop or even that ubiquitous coffee shop whose name we need not mention) that becomes a local draw simply by participating in community life. They might sponsor softball teams, provide product to local charity drives, and adapt menu offerings to regional tastes. While Starbucks tried to position itself as "The Great Good Place," there's no reason why the center of community life can't be a different kind of commercial site. As discussed in the Retail Media News analysis of Giant Eagle's Get Go, adding seating and WiFi, value-added meals-to-go, good coffee, and single-serving items also enhances the viability of these sites. Consumers don't really want to "hang out" in the regular supermarket, but its sheer size means that the average trip lasts about half an hour. In small format stores, people need a reason not to rush out, whether it's a food tasting or a digital display with tailored content, such as cooking demos or local sports highlights.

Finally, small format stores should focus on what they do best: catering to the needs and desires of their already-loyal following. For example, JoAnn stores, which have expanded their offerings to home decor, crafts and framing, have had success with small format stores that cater more explicitly to their core constituency: people who sew. The point is not whether small format is new or old, successful or silly, but rather that it exists and it does speak to core customers who desire a convenient but not overwhelming experience. The key is tapping in to a nostalgia for the small and the convenience of the local without losing the excitement of the new or the selection of the grand. It's no small order, but in today's tough retail landscape, the consumer demand for this precarious balance can no longer be ignored.

As a consumer, do you prefer small local stores or larger national ones? Does your perception of the store's local or environmental focus influence your shopping decisions?

+1 # Bill Gerba 2009-02-19 19:55
The trend towards small layouts and reconnecting with core shoppers was already showing strength even before the recession hit. Starbucks was testing out 160 sq. ft. microstores in areas with high concentrations of core customers (who probably weren't uttering 16-word incantations to order their cup o' joe either), and Best Buy was trying out a few stores about 1/3 the size of their typical layout.
+2 # Online Supermarkets 2009-02-20 08:49
The boom on micro-supermarkets and online grocery delivery in the UK seems to support your identification of 'food deserts' (easily mis-spelt as the 'food desserts'). Tesco Metro has exploded in sub urban areas and have been so effective that house prices in the immediate surrounding have increased. An additional source of fresh produce is the petrol forecourt. Placed in accessible locations but often far from a supermarket, some of the major food retailers have exploited the locations to attract significant - and sustainable - business.
0 # Bill Gerba 2009-03-02 21:58
One has to wonder whether the rise of small stores will bring with it a rise in prices. After all, cost per square foot is typically higher in smaller stores, and that seems like it would have to translate to higher costs for shoppers. Of course, one might also price in convenience, but the lower-income shoppers who often populate the food deserts might not be too thrilled (or too able) to pay more simply because a store is closer to home.
0 # Alice Julier 2009-03-13 19:27
I agree with Bill's comment: interestingly, some of Giant's Get-Go locales are simply amped-up convenience stores while others (Giant Eagle Express) are really mini-supermarkets. In fact, they're often placed within a few miles of each other. The testing ground will be in perishables: fresh items are what people in the "food deserts" need and want most, but they are also notoriously hard to find (from the customer's point of view) and hard to manage (from the store's perspective).
Refresh comments list
RSS feed for comments to this post
JComments