Tweet
Last October, the Out-of-home Video Advertising Bureau (OVAB) staged their first Digital Media Summit in New York to bring together agencies and networks, and to launch their new Audience Metrics Guidelines. The event attracted many of the key players in the industry and was considered by all to be a smashing success. One of the requests from that session was to conduct a repeat performance on the west coast so that agency planners and buyers who couldn't attend the NYC event could experience the DOOH excitement firsthand. With this in mind, OVAB partnered with thinkLA (the successor to the LA Ad Agencies Association, the Ad Club of LA and the Magazine Representatives Association) and the West Coast Digital Media Summit was born. 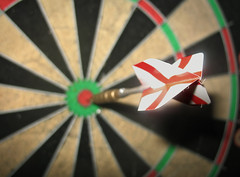 Image credit: Tim Snell
Held on March 25th at the Beverly Hills Hotel -- the first (and potentially only) time I'll ever get to experience how the Paris Hilton set lives -- the event was jam-packed. Over 240 people filled the ballroom, with a good mix of network and agency representatives. The presentations were largely updates of October's content -- an overview of the successful Team Fox DOOH initiative from last summer and OVAB President Suzanne Alecia's overview of the OVAB metrics guidelines. Of most interest was the agency panel discussion. On the stage: Jonathon Haber from OMD; Chris Harder, Starcom; Tim Farish, NBC; and Lindsay Wong from Razorfish West. Here are a few choice comments from the panel, which I also posted live to Twitter during the event:

Harder:"Starcom will spend over $20 million in out-of-home digital video this year."

Harder:"We want our cake and to eat it too. We want targeted media, but we don't expect to pay a large premium for it."

From a business standpoint, it makes sense that the agencies want to "have their cake and eat it too", since they're currently in a position of power relative to DOOH inventory owners (i.e. the network operators). However, even with that said, agencies like Starcom have noted that they're moving forward with DOOH projects this year, even while acknowledging that we don't yet have all of our ducks in a row. That could indicate several things: first, maybe they think they're already getting a great deal because unorganized (or disorganized) DOOH networks are willing to cut great deals simply to generate some cash flow and monetize tons of unsold industry. Second, it could be that agencies are getting pestered by clients who want to diversify their media mix and improve advertising accountability. And third, perhaps enough have finally tasted the sweet, sweet Kool-Aid that is our industry's hype machine.

Whatever the reason that agencies are paying more attention to us these days, it's clear that organizations like OVAB need to think about their next steps. At some point in the not-too-distant future, their role will change from one of advocacy and education to something more along the lines of accountability and shepherding. And if you think it's too soon to start worrying about such matters, I'll point out that only a few years ago, we were simply trying to explain to agencies and planners what digital signage is. Today, we're talking as peers about legitimate business issues like targeting and pricing. That's pretty solid progress in my book.

The agency folks seem to be saying that if the pricing was lower, they'd buy a lot more DOOH space. Is this really true, or are there other factors at play?

+1 # Anonymous 2009-04-14 00:38
Sure maybe the price could be lower. But I think the agencies are just holding out because they've got the upper hand.....for now.
+1 # Francois Reeves 2009-04-14 06:30
Agencies have traditionally made up their own measurement tools or have established an "objective" body capable of producing such data for their client. So in a way I agree with Bill, this association is a definitive indication that they are moving in the DOOH space. What's in it for them? Agencies make a percentage on ad placed. The bigger the amount, the bigger the income. If they have to work a lot for little money, they will stay away from the media. If they have to search a lot or use different measuring tools and companies (i.e. more work) they will stay away. The constant here is consolidation at all levels, Consolidation of media, consolidation of measurement. This is surely pointing to the next level of progress.
0 # Victor Estrella 2009-04-14 17:55
Let's be real. It simply comes down to efficiency. Agencies and innovative media buyers want it, but can't get it when they plan for a digital out-of-home buy because this inherent fragmentation of networks. Not to mention the problem of having to transform creative content across multiple platforms. This is not only a fundamental audience targeting issue, but also a technological limitation in current offerings. This is where we can begin the discussion and explore a solution.
0 # Emerald 2009-04-14 18:11
The entire digital out-of-home industry is broken, especially the way advertising is being bought. There is an immediate need to invigorate the digital signage and digital out-of-home industries"so much so that we should even change the name of the industry itself. The term oeDOOH should only remain to be a remark coined by Homer Simpson and not an acronym that identifies the sophisticated animal that it is: fast-growing, rapidly-evolving, cutting-edge, and technologically advanced"these elements are its core strengths, but there remains to be a need to utilize the full-scope of these vast media platforms, as they grow and evolve with astonishing velocity.
0 # Anonymous 2009-04-14 18:16
I agree with some of the comments above. It's more about finding what advertisers want, speaking their language, and being able to measure ROI better. The terms oedigital out-of-home or oeDOOH are somewhat stale and uninteresting, undermining the dynamic nature of the platform and oenewness of the industry itself. These terms take with it some mediocre connotations about the platformTMs performance and the terms donTMt quite resonate as dynamically as Web 2.0, Interactive Media, or Integrated Advertising.
0 # Bill Gerba 2009-04-18 13:43
All, Very much appreciate the feedback. I think Francois touches on an important point -- OOH placements have never yielded the same commissions as TV or print placements, so old-guard agencies were reluctant to put a lot of emphasis on them for revenue reasons. However, when clients start asking for these types of campaigns -- and particularly when they straddle the line between old-school advertising and experiential trade promotion -- their agencies simply can't ignore them.
0 # Emerald 2009-04-20 22:08
Agencies can't ignore them, but can't allocate major media buys to this industry either. Why? Because they can't rationalize a spend that is wasteful. I know that there are companies right now that are trying to aggregate all these networks, but even if they do, how media plans are still tough to execute because of the fragmentation. And even if the process of buying media itself was smooth, another challenge arises--transmitting content over multiple platforms. shouldn't there be a way to streamline this process as well?
Refresh comments list
RSS feed for comments to this post
JComments