Tweet
Whether you're making a five-second station ID message or a 30-minute long-form segment, sooner or later you'll have to come to grips with two challenges. First, most of the members of your "audience" don't consider themselves an audience at all: they're there to shop, visit, navigate, or do any of a hundred other things, but probably not to watch your out-of-home media campaign. Second, as a corollary to that, there are going to be a lot of people -- the vast majority, really -- who never see your piece in its entirety. This can be frustrating for designers who count on their audience watching a clip from start to finish in order to get the gist of it. It's even worse for the viewing audience, who are left with bits and pieces of content that have no meaning without context.

As you may have guessed from reading our recent articles on content production, people are still over-thinking how their pieces should work. We continue to see highly complex spots that, while produced with very high production values, demand too much viewer attention for far too long to be viable in the field. While there's no guaranteed, 100% effective solution to this problem, we've found one approach to be extremely useful: treat the clip as a series of scenes and shots. Just as a movie director composes a film from numerous small pieces, effective digital signage content can be constructed from segments designed to catch attention and relay some information quickly -- sometimes in a mere second or two. To maximize the chance of getting your message across to an increasingly distracted audience, try to remember that digital signs work more like posters than TV. We recommend the following procedure when going from the idea phase to the production phase of your content creation process, which is kind of like storyboarding in reverse: 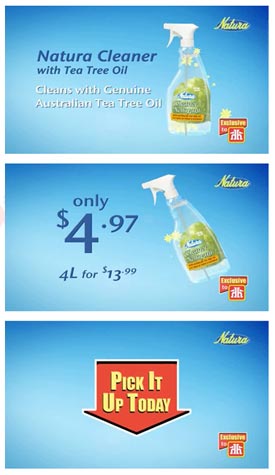 If done correctly, you'll be left with a cohesive piece of content that can still get useful information across to people who might only look at it for a few seconds. One of my favorite examples for illustrating this kind of technique comes from Artisan Complete, a retail POP/out-of-home media company based in Canada. The images to the left come from an ad for Natura cleaning products that they entered into the POPAI Digital Signage Awards contest in 2007. Though the complete segment is a full minute long, it's divided into several shorter segments. Each of these shorter segments, in turn, can be broken up into individual shots that are clear enough to function like regular posters. Each stands on its own, and while the subsequent scenes reinforce previous ones, none of them depend on each other.

The Natura clip ran in Home Hardware stores in Canada, and it was scheduled to appear on screens that were placed directly above piles of the featured products. Thus, even though the last screenshot on the left doesn't include an image of the product or any other information, it still served as an effective advertisement of the product's availability, and provided a call-to-action that was easy for viewers to act on. Even better, it didn't require the viewer to see any of the other segments to understand it.

Bringing it all together

As you design your individual "posters", arrange elements using the information we've outlined on this blog over the past few weeks. All of our standard rules apply: use short blurbs of text that are easy to chunk and code and are ordered to take advantage of the serial position effect. Include a call-to-action. Use an attractive font. Avoid unnecessary distractions. Use color and contrast to your advantage. Check moving elements to make sure they're discernible from the periphery.

While it would be nice to say "follow these tips and you'll have great content," of course it isn't quite that easy. The past few blog articles illustrate some best practices for digital signage content creation, but it's still going to take a good deal of audience research, design savvy, and, of course, creativity to produce spots that really stand out. However, all of those things equal, I'm confident that content designed with our recommendations in mind will show consistently better performance (in the firm of higher comprehension and recall rates) than those that don't.

What's on the horizon?

So, what will we cover next? We're doing more research on content length (duration), screen placement, multi-zone versus full-screen content, best practices for using sound, store integration, and multichannel marketing, so expect to see those types of articles in the future. I don't have enough data about any of these topics to make recommendations quite yet, but that's probably a good thing. Frankly, it's been a while since we've covered any of the interesting things going on elsewhere in the digital signage industry.

I'd love to hear your feedback too:
Let me know in a comment below and I'll do my best to tailor future articles accordingly.

0 # Franois Reeves 2008-05-15 19:27
Examples would be nice. * Is there anything you'd like to add? Yes. Could you share your views on OutdoorTMs new measurement called Eyes-On Audience. It will be available in the TAB Outdoor audience database. Also could you cover Bluetooth, Motion detector and cell phone audio linked to digital signage in a new series of articles? It would be greatly appreciated.
+1 # Anders Larsen 2008-05-16 08:22
First of all, thank you for sharing the results of all your testing. We've been using digital signage for a few years now, but we haven't really gotten started on measuring the effect. It would be great to hear a little about how you do you testing. What techniques do you use? What are your experiences with qualitative vs. quantitative measurements? What are the pitfalls and things to look out for when setting up a test? In short: where do I start on the intimidating task testing the effect of our digital signage?
0 # Szabolcs Botond 2008-05-21 09:12
Dear Bill, First of all, Your post and publications are really useful. My name is Szabolcs Botond I'm the leader of the Hungarian Digital Signage Association. IT would nice if we can contract directly to speak about some possible cooperations. Regards, Szabolcs Botond szabolcs.botond

lightvision.hu
0 # Nate Nead 2008-05-22 19:30
As always, another great post by Bill Gerba.
0 # Bill Gerba 2008-05-25 02:15
Franois, Anders: great ideas, both. We are doing a lot more work with interactivity and mobile-signage links, so I expect we'll do some articles on that in the future as we learn more. While I'm not too well versed on measurement for outdoor advertising right now, I expect that TAB's recent activity in the area is going to make a lot more data available for analysis, so perhaps we can study it in the future. As for research methodology, that sounds like a great article idea as well. I'm looking forward to working on that one.
0 # Laura Clevenger 2009-03-19 07:27
On a crash-course to produce ads for newspaper advertising website... your advice ROCKS! Thank you, even if my job is toast, I'll have gone out with style!
0 # Youngbruce 2011-07-27 05:06
digital signage solution becomes more poplular tahn before, and the web-based is instead of the c/s constructure.
0 # androidmid 2011-08-26 05:32
it is one traditional media for advertising.
0 # Merrywdress2011 2011-08-26 05:33
What techniques do you use? What are your experiences with qualitative vs. quantitative measurements?
0 # Lisa 2012-02-27 03:07
Dear Sir/Madam, I'm Lisa. I have dealed with led display exporting more than 4 years, I found many buyers want to find the real front-access module, but it's pity all the products you found in the market now, it's not the real front-access unit, we are now availabe with both front-rear service in one, this module no need any screw to lock it, the front-louver is a completer one, not like before units with 4-square; look at the module you will see both on top/bottom with anti-slip groove, this will help a lot for the eveness. I have video for you to look how to operate this front-rear working modules, if you are interested in this kind of products, pls contact me for details. thanks! Have a nice weekend! Best regards, Lisa
Refresh comments list
RSS feed for comments to this post
JComments