Tweet
David Verklin, former CEO of Aegis Media and now CEO of Canoe Ventures, had some interesting things to say about the future of television during a keynote address at an industry event in New York a few weeks ago. On subjects like addressability, creative versioning and media targeting, Verklin made it a point to reference the out-of-home industry, which counts those abilities as key advantages over today's broadcast media.

So, what did he say?

Here's what Verklin told the audience during his keynote at the conference:

Another bright spot in the business is the outdoor business. You know, a picture on a stick in the age of TiVo is actually a pretty darn good idea. In many cases, the out of home business... Every one is under pressure. Don't get me wrong. I'm not here to paint a rosy picture of the American media business, but outdoor is doing surprisingly well." 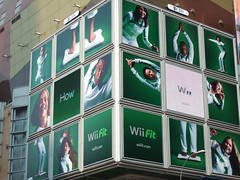 "Also, pay attention to something called the OVAB. The [Out-of-home] Video Advertising Bureau, a new trade association that has been started in the last two years to track the delivery of out of home video advertising. Think about it. Everywhere you go in America you see a flat screen. You see a flat screen in the airport. You see flat screens in elevators all the time. We have seen an industry emerge in America, the OVAB... it is actually a growth spot in the American economy.

Why is Verklin paying so much attention to OOH?

Verklin’s comments are in line with what Donna Speciale, President of Investment and Activation at MediaVest USA, said during an interview in September:

"It will eventually end up being a video choice. We need to stop thinking it is TV, OOH or digital."

Part of the ramification for a "video" buy vs. TV vs. OOH vs. digital is that of budget allocation. If and when that materializes, the pot for networks to dip into will likely get bigger. Much bigger. And that should pave the way for stronger growth and sustained health.

Reallocation of funds is happening today, so Christie's observations are very much on target. Don't believe me? Just ask the guys at SeeSaw Networks or Adcentricity where their clients are taking money from to dump into digital out-of-home ads. Funding for DOOH media like flat-screen LCD advertising in airports and roadside LED billboards has to come from somewhere. And as we've noted before, the budgets for TV, radio and other broadcast media are so gigantically huge that even allocating a tiny fraction of those media buys to below-the-line channels can have a big impact (both percentage wise and dollar wise) for smaller markets like ours.

Can the market for digital out-of-home media grow without taking revenue away from more traditional advertising options? Leave a comment and let us know.
JComments