Is Digital Signage SaaS "Greener" Than Hosting Your Own Server?

Tweet
I really don't like cause marketing. Adopting the facade of curing some social ill for the sake of selling product seems crass and opportunistic, which probably explains why I can't sit through more than a few minutes of Extreme Home Makeover without wanting to smack someone. The latest cause craze these days is of course the green-ifying of everything. Marketers are slowly but surely training us to believe that we're evil if our light bulbs and laundry detergent aren't saving the environment somehow, and the trend is growing. While I have absolutely nothing against preserving the environment -- and I'm actually psyched that such a cause is fostering innovation in virtually every industry these days -- I'm getting pretty tired of getting hit over the head with the green bible every time I walk into my local supermarket. Still, I need to take green seriously, since as a digital signage vendor my world revolves around lighting up thousands of LCD, LED and plasma displays. In the past, I've helped a couple of customers do the math to determine their network's total power output and even complete carbon footprint. But the other day I was caught by surprise when someone posed a new question: is software-as-a-service (SaaS) green?

First off, "green" is a pretty relative term when you're talking about lighting up 500W displays all over the place. But the key question, "Does software-as-a-service use more or less power than a self-hosted and locally-managed application delivery" seems valid enough. And certainly my initial guess was "yes, it must be, since there should be fewer computers providing the service." Still, I hadn't done the math, and since the company I was speaking to has a big reputation for taking their projects green, I didn't want to screw up. After spending a little time doing some research and plenty of guesswork, I came up with some not-unbelievable yet not-terribly-satisfying figures that I thought I'd share and get some feedback on. 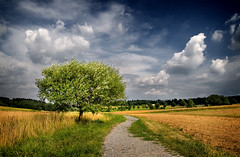 Image credit: Martin Gommel
You know what happens when people go assuming, right? They make an ass out of u and Ming (and if Flash Gordon has taught us anything, it's a bad idea to piss off Ming). Unfortunately there's no way that somebody could figure out an industry-wide average for things like server density, utilization ratios and power consumption without making some guesses, so here are mine: Using that set of assumptions (which I expect I'll be told are wrong), we can develop this simple table of efficiencies:

It's all about density, baby

There are plenty of places to take a wrong turn above, and since a good chunk of my company's revenues come from providing digital signage SaaS solutions, I thought it prudent to point out just how far off-the-mark the above calculations could be if we vary the assumptions a bit. The key is server density -- how many nodes you can manage on a single machine (or cluster) without it going up in smoke. I think my estimates for server wattage and the nodes/cluster for SaaS are pretty accurate, since those are all things I have first-hand experience with. But when it comes to the total number of nodes managed on a given server, as I noted above, my estimate's as good as the next guy's. Look what happens when you vary that number:

So you can see that at higher numbers, the efficiency of a self-host solution starts to approach that of a well-utilized SaaS cluster (assuming you can cram the management of 500 nodes onto a single low-power server) . Likewise, underutilized SaaS clusters, because of their high base power requirements, rate low for power efficiency -- a SaaS cluster managing only 400 nodes (i.e. a few small customers) isn't much better off than a customer hosting their own server for 100 nodes.

What are the real-world implications of this?

Going back to our original set of assumptions, let's add in some data from iSuppli that shows that 758,000 nodes of digital signage were deployed to the retail sector in 2008. This total would require either 7,580 individual servers each managing 100 nodes (for a total power draw of 2,274 KW), or 379 hypothetical SaaS clusters (which would draw only 379 KW). To put that in perspective, the difference is enough to power about 1,500 homes. If iSuppli's projections are accurate and we see the market size triple to 2.5M nodes in 2013, the consumption differences and savings would roughly triple as well.

Ultimately, the difference simply isn't that large, especially when you consider that those same hundred screens requiring a 300W server are each drawing 200-300W themselves. So at this point, I'd be willing to say that when it comes to digital signage, a well-managed SaaS infrastructure is likely to be more electricity-efficient than a typical self-hosted solution. However, the difference is fairly modest, varies from network to network, and is certainly not something I'll be putting into my sales pitch any time in the near future :)

When it comes to digital signage, how important do you think it is to be green?

0 # Annie 2009-06-05 15:21
Bill: I like the fact that you manage not to annoy Ming and come to some empirical conclusions that are cautious. The commercial claims about green-ing technology are so ubiquitous they lose any moral power and open everyone up to charges of greenwashing. I'm always sad when Apple shows up low on the green technology list, but I appreciate it when they're realistic about change over time rather than beating you over the head with trumped-up examples. I think one of the other key factors is when and how the service will be deployed -- that is, does it run all night long? can it be powered down at off-peak times? What are the site-specific variables that determine usage? What's great about your conclusions is that it presents a starting point from which you can make other arguments for efficiency and use-value. Annie
0 # Bill Gerba 2009-06-05 16:08
Hi Annie, Thanks for the feedback, and you make some great points. We definitely have worked on networks that were more eco-conscious and asked for specific tweaks like low-power media players, utilization of specific computer resources, and even some specific software tweaks to make the screens run a bit dimmer (when appropriate) and the players a bit cooler. And of course, as you note, scheduling the screens to turn on/off at designated times and allowing the players to go into their idle/hibernate states when not in use can show dramatic power savings.
0 # Richard Lebovitz 2009-06-08 12:39
I'm glad to see this discussion as we hear a lot of talk about "green" in the digital signage industry but little to support the talk. We've likewise started a discussion on the Digital Signage Expo LinkedIn site, where we plan to reference your blog entry as one other source for information on this subject. What's perhaps missing here, as from other discussions on the subject, is the birth-to-death scenario for digital signage, i.e. what's the carbon footprint for manufacturing and end-of-life disposal as well as the operational aspects you cover so thoughtfully here.
0 # Bill Gerba 2009-06-08 14:16
Hi Richard, As mentioned I have done a couple of complete carbon footprint analyses for digital signage networks -- that includes everything from manufacturing the screens to shipping all the components to lighting them up, etc. I won't lie: the number is very large, even when using conservative estimates. The whole process also produces a lot of toxic waste, mostly in the form of chemical runoff from the LCD manufacturing and PCB etching processes, and chemical emissions (including Mercury and some radioactive stuff) from coal-burning powerplants that provide a good amount of US electricity. All that said, though, I've had a very hard time determining whether the process is a whole lot worse than refreshing printed posters of a similar size on some regular schedule. Print inks are typically petroleum based and have a lot of similar toxicity and energy-intensity problems as digital, and of course there's more shipping to do over time. When all is said and done, though, ultimately you're trading energy and chemical exposure for some "work." As long as that work's value is greater than that of the energy and material costs, people will continue to do it.
0 # PhilGo20 2009-07-10 11:59
Is the debate between SaaS and Self-hosted still happening in DS ? Do vendors really hav to push it in 2009 ? I honestly haven't heard any such kind of debate in the last year or so, except from government or public institution worried about security which is a different topic in my opinion. Just curious how many DS SaaS platforms still have to evangelize clients on the merits of SaaS.
0 # Bill Gerba 2009-07-10 14:32
Hi Phil, There definitely is still a debate in the community, but most of the time it's not between vendors of one solution or the other, but between prospective customers (with their own prejudices and opinions) and the vendors they're seeking out. I do think that today's customer comes into the argument armed with a lot more information and many fewer false impressions than before, but there are definitely quite a few people out there who start out with a notion that one type of solution is somehow inherently better than another. I just wrote an article on July 9th, in fact, about some of the [[http://www.wirespring.com/dynamic_digital_signag e_and_interactive_kiosks_journal/articles/Choosing _the_Best_Digital_Signage_Providers__SaaS_vs_Self_ Hosted-729.html|arguments typically made for and against digital signage SaaS solutions]], if you'd like to check that out.
0 # digital signage saas 2010-08-06 14:50
I prefer saas solutions as although it is more expensive it takes some of the pressure away from you and means that it is easier for you to do your own job and leave your signage to the professional. After all, thats why your paying them so you should get your money's worth.
Refresh comments list
RSS feed for comments to this post
JComments